The document Cloning NEET Notes | EduRev is a part of the NEET Course Biology Class 12.
All you need of NEET at this link: NEET

Clone is the exact carbon copy or copies produced by a single parent (mother or father) by non-sexual methods and are indentical to their parent genetically and morphologically. Clone is a greek word which means twig (Klon=twig). As all the branches of a tree are similar in morphology and genetical characteristics, in the same way clones are also similar to one another.

Cloning is the process of producing many identical organisms (clone), generally used to produce new plants with similar characteristics. Microbes produce clones through asexual reproduction. In higher animals, clones are produced by nuclear transplantation technique in which the nucleus from a somatic cell is transferred into an unfertilized enucleated egg. The world's most famous sheep 'Dolly' was a clone produced by this method.

Many plant species show vegetative reproduction. In these plants, the clones produced by a twig (detached shoot) are similar in their genotype as well as in phenotype (except environmental variations). Scientists have been much curious to apply this characteristics of plants on animals also to conserve the desired genotypes of some rare animals by making their clones. In higher animal, showing sexual reproduction, a zygote is formed after fertilization of the egg by speromatozoan. Zygote differs from its parents in genotype. It was revealed by the scientists through several experiments that only the egg and/or zygote has the potential to produce a whole individual from a single cell.J.B. Gurdon(1969) of Oxford University applied this fact while performing an experiment on frog. He destroyed the nucleus of an unfertilized egg of frog by treating with U.V rays and transferred the nucleus of intestinal epithelial cell of tadpole into the egg cell . In this experiment a few of the many transplanted eggs could develop into tadpoles. These developed tadpoles were identical in genotype and phenotype to their parents. This nuclear transplantation technique devised by Gurdon is still being used in cloning paractice in some modified manner. A brief introductory history of cloning is given in table.

In addition to the fact depicted in table attempts are continuously in progress in this field. In December, 2001 (report published in February, 2002) scientists at University, Texas, successfully produced the first cloned domestic pet named as copy cat (C.C). Further, in Aug. 2005 Woo-Sukhwang of South Korea produced the clone of an Afganian hound (Domestic dog used for hunting).

An Italian scientist Dr. S. Antenori is trying hard to produce human clone. It has triggred serious discussions and debates at global level, focussing on the medical and ethical issues.

Cloning is an extensive technique, which is divided into following types, on the basis of the experimental material used -

Embryonic cell in animals, are deprived of their totipotency by the time they enter into gastrula stage. So animal cloning is some what more difficult than plant cloning. On the basis of aims and end products animal cloning is of two types

A clone of the whole animal is prepared in reproductive cloning. The techniques which are used in such cloning include blastomere separation, nuclear transplantation and the Honolulu technique.

This techique can be used to conserve and increase the number of those animals which are threatened to be extinct in the near future.In nuclear transplantation technique, nucleus is removed from the egg obtained from the female. After then the nucleus of the desired cell (2n) is transferred into the enucleated egg cell which is then allowed to develop into an embryo in suitable conditions. The developing embryo is the clone of the donor cell from which nucleus was obtained for transplantation.

In Honolulu technique ( 1998-Teruhiko wakayama - cloned mice) there is no fusion of the donor and recipient cells or its nucleus. Instead of ,nucleus from the donor cell which is in G0 or G1, stage is substituted into enucleated egg cell (culture medium or chemical both is used in place of electric shock to stimulate development).

Therapeutic cloning technique may prove to be very useful in the field of medical science, particularly when there is a need for the transplantation to replace some damaged and diseased organ or tissue by a healthy organ from a suitable donor. In such condition, if the cells from the patient himself are taken and cultured to form desired organ. The organs developed in such manner( organ cloning) will be easily acceptable by the patient, and there will be no possibility of its rejection as often occurs otherwise.

A number of diseases like will be no possibility of its rejection as often occurs otherwise . A number of diseases like parkinsonia, alzheimer, diabetes and diseases related with kidneys will possibly be cured in future by the application of cloning technique. "Dolly" sheep was produced by using nuclear transfer technique by Dr. lan wilmut and his collegues at Roslin Institute of Scotland in 1997.

They used somatic cells from udder (mammary glands) for forming this clone. One udder cell with its nucleus intact was selected because this nucleus carried the mother's genetic information.

Meanwhile, and unfertilized egg cell was taken from a different sheep. Its nucleus was sucked out and an enucleated egg cell was obtained. After then the udder cell nucleus was fused with the enucleated egg cell under electrical stimulation. Now this egg cell had the mother's nucleus. At last the fused egg was implanted into the uterus of surrogate mother, other than the egg donor where it grew into a lamb. Thus the Dolly was born, as a genetically identical copy of its mother 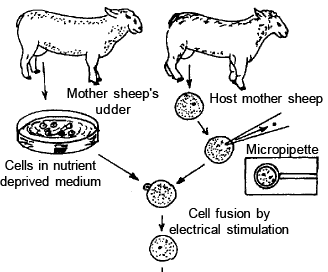 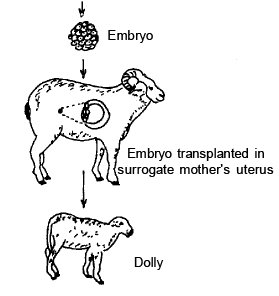 1. This technique can be used to improve the breeds of live-stock used in agriculture.

2. Cloning is helpful for providing many useful substances and chemicals required for human body, and also in the cloning of such animals which can be used as a source of organs for transplantation purpose in medical practices.

3. British scientists have been successful in obtaining alpha antitrypsin from sheep for curing an incurable disease emphysema and clotting factor- ix for curing haemophilia. It has been possible by the use of genetic engineering.

4. Many incurable diseases which are not curable so far, may be cured effectively in near future by applying the processes relating with cloning and genetic engineering.

5. Cloning is useful to increase the number of individuals of those species which are at the edge of extinction, thus helpful in conservation of biodiversity.Disputes Related to Cloning

At present, the issue of cloning has been a matter of discussion and disputes among the scientists and the sociologists. Many questions are being raised with regards to the ethical, moral, and social aspects of cloning.

Doubts have also been there about the health and ageing of clones and the misuse of cloning.

Cloning has important role in treatment of serious and non-curable diseases, a view that is favoured by most scientists, however there is no agreement on the issue of human cloning.