The document Concept Of Solid Angle NEET Notes | EduRev is a part of the JEE Course Physics For JEE.
All you need of JEE at this link: JEE 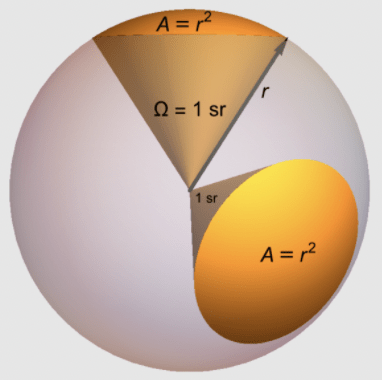 How do we measure a solid angle? Let us consider how do we measure a plane angle. See fig. We draw a circle of any radius r with the centre at O and measure the length 𝑙 of the arc intercepted by the angle.The angle 𝜃 is then defined as 𝜃 = 1/r. In order to measure a solid angle at the point O (fig.), we draw a sphere of any radius r with O as the centre and measure the area S of the part of the sphere intercepted by the cone. The solid angle Ω is then defined as Ω = S/r2

Note: That this definition makes the solid angle a dimensionless quantity. It is independent of the radius of the sphere drawn.

See fig. As we gradually close the curve, the angle finally diminishes to zero. A closed curve subtends zero angle at an external point. Similarly, a closed surface subtends zero solid angle at an external point.APPLICATION OF SOLID ANGLEQ. Fraction of light emerging from an isotropic point source through a conical region having semi vertex angle 𝛼 and with its apex at the source.Ans. Let us consider a sphere of radius R with its centre at the source S.

Let AB be the section (circular) where the cone ASB intercepts the sphere. If ΔS be the area of the spherical portion ACB (lying within the conical region) then, the solid angleΩ = ΔS/R2Let SC be the symmetry axis of the portion of the sphere ACB.If x be the distance of a thin circular strip then its areadS = 2𝜋 x Rd𝜃= 2𝜋 (Rsin 𝜃) Rd𝜃Total Area,ΔS = ∫ dS

This relation between plane angle 𝛼 and solid angle 𝛀 is advised to be remembered.If Ω steradian be the solid angle for the cone then, the fraction of light passing through the cone will be