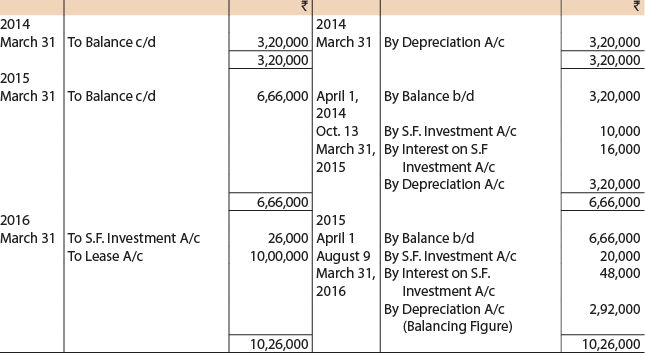 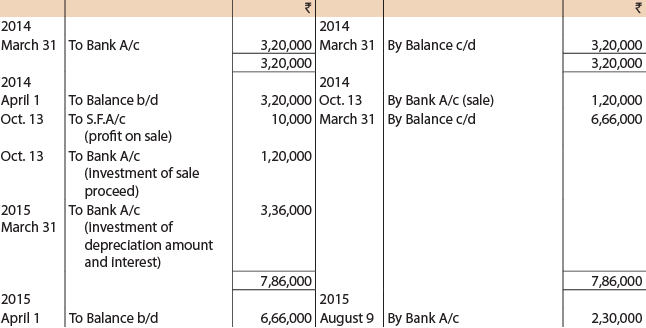 ILLUSTRATION 6:- On the basis of the data given in the illustration 5,
Required:- Prepare Lease Account and Depreciation Account for the years 1st April, 2013 to 31st March, 2016.

3.6 Machine Hour Method:- Where it is practicable to keep a record of the actual running hours of each machine, depreciation may be calculated on the basis of hours that the concerned machine worked. The machine hour rate of the depreciation, is calculated after estimating the total number of hours that machine would work during its whole life; however, it may have to be varied from time to time, on a consideration of the changes in the economic and technological conditions which might take place, to ensure that the amount provided for depreciation corresponds to that considered appropriate in the changed circumstances. It would be observed that the method is only a slight variation of the Straight Line Method under which depreciation is calculated per year. Under this method it is calculated for each hour the machine works.Schedule II to the Companies Act 2013, prescribes estimated useful life of different assets for companies, also recognizes this method to some extent. It prescribes that depreciation should be charged using estimate useful life suggested in it, however, in certain category of plant and machinery it prescribes to charge higher amount of depreciation if these assets are used for 2 shifts or 3 shifts. In a way, schedule II combines straight line method and machine hour method.

3.7 Production Units Method:- Under this method depreciation of the asset is determined by comparing the annual production with the estimated total production. The amount of depreciation is computed by the use of following method:Depreciation for the period = Depreciable Amount X

The method is applicable to machines producing product of uniform specifications.

ILLUSTRATION 8:- A machine is purchased for ₹20,00,000. Its estimated useful life is 10 years with a residual value of ₹2,00,000. The machine is expected to produce 1.5 lakh units during its life time. Expected distribution pattern of production is as follows:

Required:- Determine the value of depreciation for each year using production units method.

ILLUSTRATION 9:- M/s Surya took lease of a quarry on 1-1-2013 for ₹1,00,00,000. As per technical estimate the total quantity of mineral deposit is 2,00,000 tonnes. Depreciation was charged on the basis of depletion method. Extraction pattern is given in the following table:

5. CHANGE IN THE METHOD OF DEPRECIATION:- The depreciation method applied to an asset should be reviewed at least at each financial year-end and, if there has been a significant change in the expected pattern of consumption of the future economic benefits embodied in the asset, the method should be changed to reflect the changed pattern. Whenever any change in depreciation method is made.  Such change in method is treated as change in accounting estimate as per Accounting Standards. Its effect needs to be quantified and disclosed. A change in an accounting estimate may affect the current period only or both the current period and future periods.Example:-

ILLUSTRATION 11:- M/s Anshul commenced business on 1st January 2011, when they purchased plant and equipment for ₹7,00,000. They adopted a policy of charging depreciation at 15% per annum on diminishing balance basis and over the years, their purchases of plant have been:

On 1-1-2015 it was decided to change the method and rate of depreciation to straight line basis. On this date remaining useful life was assessed as 6 years for all the assets purchased before 1.1.2015 and 10 years for the asset purchased on 1.1.2015 with no scrap value.Calculate the difference in depreciation to be adjusted in the Plant and Equipment Account for the year ending 31st December, 2015. 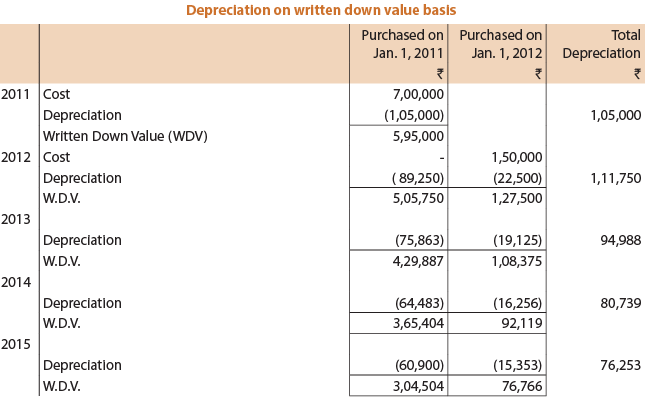 7. REVALUATION OF PROPERTY, PLANT AND EQUIPMENT:- If there is an upward revision in the value of asset for the first time, then the amount of appreciation is debited to Asset Account and credited to Revaluation Reserve Account. If there is downward revision in the value of asset then Profit and Loss Account is debited and Asset Account is credited. If an asset was earlier revalued downward and later on revalued upward then the appreciation to the extent of earlier downfall is credited to profit and loss account. If an asset was earlier revalued upward and then later on it was revalued downward then the downfall to the extent of earlier appreciation is debited to Revaluation Reserve Account. In case the revaluation has a material effect on the amount of depreciation, the same should be disclosed separately in the year in which revaluation is carried out. ILLUSTRATION 13:- A machine of cost ₹12,00,000 is depreciated straight-line assuming 10 year working life and zero residual value for three years. At the end of third year, the machine was revalued upwards by ₹60,000 the remaining useful life was reassessed at 9 years.
Required:- Calculate depreciation for the fourth year.

ILLUSTRATION 14:- The following particulars are available from the books of a public company having a large fleet of vehicles: