Like glucose, fructose also has a cyclic structure. Since fructose contains a keto group, it forms an intramolecular hemiketal. In the hemiketal formation, C5-OH of the fructose combines with C2-keto group. As a result, C2 becomes chiral and thus has two possible arrangements of CH2OH and OH group around it. Thus, 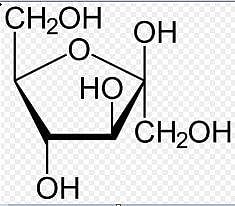 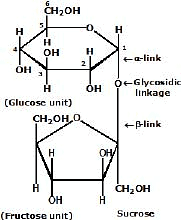 Surose is dextrorotatory, its specific rotation being 66.5%, D-glucose is also dextrorotatory, [a]D = 53°, but D-fructose has a large negative rotation, [a]D = -92°. Since D-fructose has a greater specific rotation than D-glucose, the resulting mixture is laevorotatory. Because of this the hydrolysis of sucrose is known as the inversion of sucrose, and the equimolecular mixture of glucose and fructose is known as invert sugar or invertose.