Simple way to connect multiple sources of information in analogue electronic systems is by using mechanical switches, such as those illustrated in Fig. 4.2.1. In example (a) a single pole double throw switch is used to select either input A or input B to be connected to output X. Example (b) shows a rotary selector switch that can multiplex any one of eight inputs to a single output.

In digital electronics, selecting multiple data sources can be performed by combinational logic circuits. Logic signals applied to one or more data select inputs initiate the selection of data, which may be steady logic levels or whole streams of digital information. Switching digital signals in this way is much faster and more reliable than using mechanical switch contacts. Digital data selectors and multiplexers are therefore a vital part of many digital systems. The names ‘data selector’ and ‘multiplexer’ are commonly interchanged, with multiplexers called data selectors and vice versa. If there is any difference, a circuit selecting between two inputs may be called a data selector, and more complex circuits combining multiple inputs into a single output, using various methods and existing in both digital and analogue forms, would be called multiplexers.

A simple data selector consisting of a single XOR gate was used in the 8 Bit Adder/Subtractor circuit shown in Figs. 4.1.5 and 4.1.6 in Module 4.1 to change the function of the circuit from addition to subtraction, but this was only required to select data B or its inverse B. The circuit shown in Fig. 4.2.2 however can select either of two completely independent data inputs.

The operation of Fig. 4.2.2 is quite straightforward and relies on ‘enabling’ either of a pair of NAND gates (1 and 2), but not both. 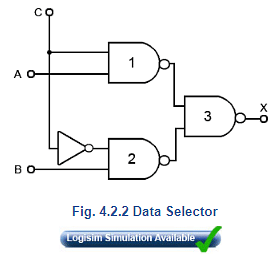 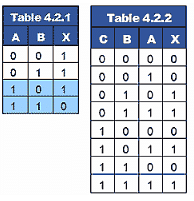