What is Stress?When the deforming force is applied to an object, the object deforms. In order to bring the object back to its original shape and size, there will be an opposing force generated inside the object.

Thus, Stress is defined as “The restoring force per unit area of the material”. It is a tensor quantity. Denoted by Greek letter σ. Measured using Pascal or N/m2. Mathematically expressed as: 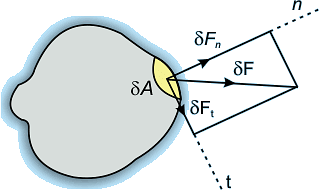 Normal and Tangential Forces on a Surface

Consider a small area δA on the surface of a body and the force acting on this area is δF.This force can be resolved into two perpendicular components:

The component of force acting along the plane of the area is called tangential force and is denoted by δFt.

Distinction Between Solid and Fluid 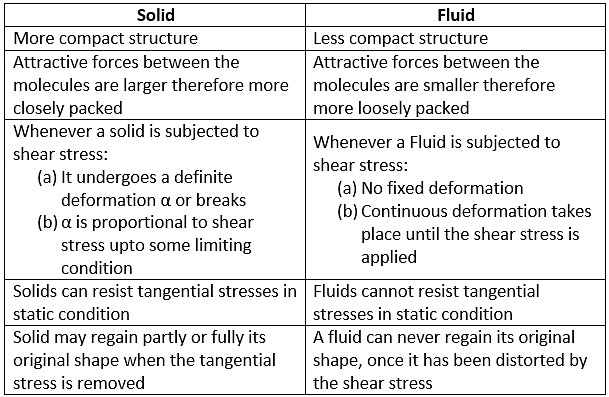 Deformation of a Solid Body

(a) Density (kg/m3)(i) Symbol: ρ(ii) Definition: The density ρ of a fluid is its mass per unit volume. If a fluid element enclosing a point P has a volume Δ∀ and mass m, then the density at point P is written as:

However, in a medium where the continuum model is valid, one can write: 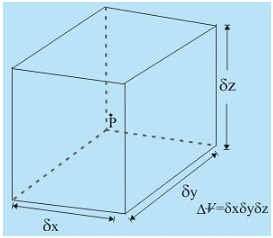 A fluid element enclosing point P(b) Specific Weight (N/m3)(i) Symbol: Y(ii) Definition: The specific weight is the weight of fluid per unit volume.The specific is given:

(c) Specific Volume (m3/Kg)(i) Symbol:  v(ii) Definition: The specific volume of a fluid is the volume occupied by unit mass of fluid. Thus,

Consider a flow in which all fluid particles are moving in the same direction in such a way that the fluid layers move parallel with different velocities: 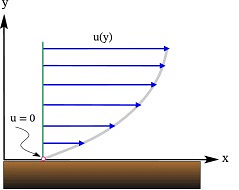 A Parallel Flow of a fluid

Question for Definition: Stress
Try yourself:The viscous force the relative motion between the adjacent layers of a fluid in motion. Which one of the flowing fits best in the sentence?
Explanation

Viscosity is the internal friction of a fluid in motion. It is the property by the virtue of which the relative motion between two adjacent fluid layers is opposed.

Question for Definition: Stress
Try yourself:Which of the following correctly states how the viscosities of a liquid and a gas will change with temperature?
Explanation

View Solution
No-Slip Condition of Viscous Fluids
Question for Definition: Stress
Try yourself:Water flows between two plates of which the upper one is stationary and the lower one is moving with a velocity V. What will be the velocity of the fluid in contact with the upper plate?
Explanation