Variable loading in mechanical joints:Machine parts are often subjected to variable loading. In many cases pulsating or intermittent loads are applied from outside, for example, in punching press forces of very large magnitude is applied for a short while (impulsive force), in crank shafts variable loads act due to nature of force arising from combustion cycle in cylinders. Often dynamic forces appear in the moving parts, e.g., inertia forces in machines and mechanisms, forces due to unbalance of the rotating components etc. Since these forces are to be withstood by the joints, care should be taken while designing a joint capable of resisting adequate load of variable magnitude. Design of two important mechanical joints is discussed below, namely, bolted and welded joints.

2. Bolted joints with variable loading: Consider design of bolts to fasten a flat cover to a cylinder as shown in figure 11.3.1. In order to ensure leak proofness necessary pretension (usually 2840 d , in Newton while the nominal bolt diameter d is measured in millimeter) is applied. Depending upon operating condition the pressure inside the closed cylinder is likely to vary in somewhat periodic manner. Let the minimum and maximum value of the pressure be pmin and pmax , respectively. 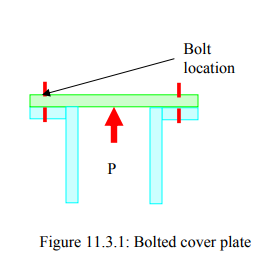 n = , wheren= number of equally spaced bolts on the bolt circleAc = area of cross section of the cylinderp = fluid pressure inside the cylinder.

It is known that only a fraction of external load is responsible for tensile stress within bolts, that is

whereF1 = initial tension in the boltC = factor that depends on the nature of joints. Some representative values of C’s are tabulated in Table 1 below.

respectively. The average and the fluctuating component of the normal stress are given by

respectively, where Ab is the root area of each bolt. The advantage of initial pretension is at once visible from the above expressions. The ratio

gets drastically reduced, The safe size of the bolt can be calculated now from wellknown Soderberg equation given below

N = Factor of safetykf  = fatigue stress concentration factor.Alternatively, Goodman’s equation or Gerber’s line may be used to calculate the root area and hence the size of the bolts. The fatigue stress concentration factor plays an important role in the design. These are found by doing extensive experimentation. A few figures are shown in Table 2.

3. Welded joints with variable loading: Because of many intricacies involved in design of a welded joint, codes are extensively used to design such joint when it experiences variable loading. The value of the maximum fluctuating load is not allowed to exceed a limit specified in the code. This value depends ona. type of the jointb. type of stress experienced by the jointc. a load factor K defined as the ratio of the minimum stress to the maximum stress. When the load is a steady one the factor takes unit value. For a complete reversal of stress the value of K = -1.

where w denotes the leg size of the fillet weld measured in centimeter. The design is found to be safe if the maximum value of the fluctuating stress is found to be lesser than the design stress.