What is a Full Bridge Inverter ? 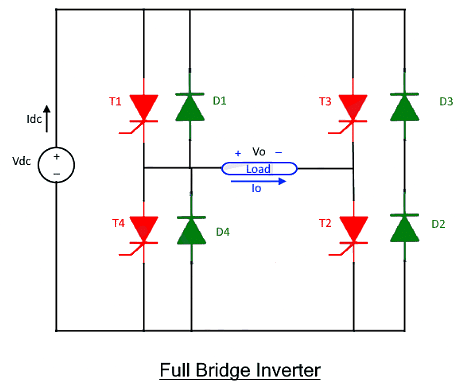 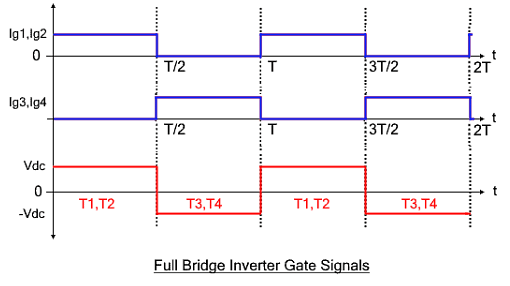 This article is about the working operation and waveform of a single-phase full bridge inverter for R load, RL load and RLC load. The comparison of all loads is given at the end of this article.

The working operation of Full bridge for pure resistive load is simplest as compared to all loads. As there is not any storage component in the load so, only control switches operate while feedback diodes do not operate through the operation of the inverter. Only two modes are enough for understanding the working operation of a full bridge inverter for R load.Mode 1: Consider all the switches are initially off. By triggering T1 and T2, the input DC voltage (+Vdc) will appear across the load. The current flow in clockwise direction from source to the series connected load. The output current across the load will be

Where RL is the load resistance, While the output voltage across the load will be

Mode 2: Thyristors T3 and T4 are triggered immediately after completely commutating T1 and T2. The polarity of voltage immediately reverses after switching complementary switches T1 and T2 with T3 and T4.  The DC input voltage across the load appear with the negative voltage which

While the output appearing current is

The current in anti-lock wise direction flows from source to load through T3 and T4 as shown in the figure.

Waveform of Full Bridge with L and RL Load

The voltage waveform in both L and RL load is square wave while the current wave in both loads are triangular. 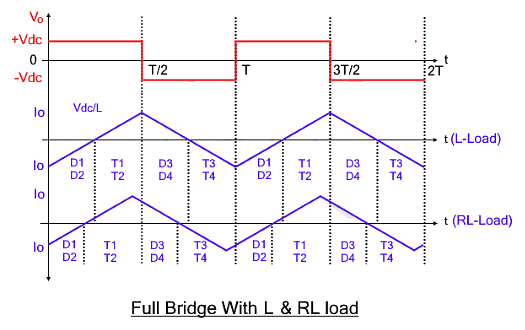 In this topic, the response of RLC (Resistive, Inductive and Capacitive) load is discussed. The RLC load shows two types of responses. The response may be overdamped, or it may be underdamped. Both these responses are briefly discussed here.

Feedback diodes are conducted initially. After triggering thyristors T1 and T2, the polarity of current reverses and load starts charging itself from source. During this mode, the current gradually increases in a positive direction till it achieves maximum peak. After achieving the maximum peak, the load current gradually decreases till the anode current becomes zero. The zero-anode current naturally commutates the thyristors T1 and T2. These thyristors conduct for T/3 of total time.

The direction of the flow of current through the load changes after triggering thyristor T3 and T4. In this mode, both the current and voltages are negative. Therefore, the load is charged throughout this period.

Thyristors T1 and T2 are triggered when anode current reaches sufficient current level. The polarity of load voltages changes i.e., input voltage appears with positive polarity. The load will charge once again due to the same polarity of current and voltage.

Waveform Comparison for all Loads 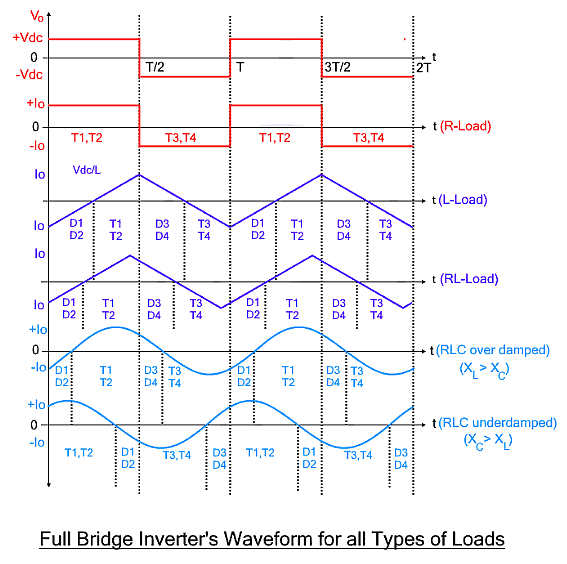 Parameters Comparison of Full Bridge of all Loads