The document Doc: Classification of Polymers Class 12 Notes | EduRev is a part of the Class 12 Course Chemistry Class 12.
All you need of Class 12 at this link: Class 12

The term polymer is used to describe a very large molecule that is made up of many repeating small molecular units. These small molecular units from which the polymer is formed are called monomers. The chemical reaction that joins the monomers together is called polymerisation. Starting from n molecular of a compound M, linking in a linear manner will form polymer x–M–(M)n–2–M–y. The nature of linkages at the terminal units i.e. M–x and M–y depends upon the mode of reaction used in making the polymers. Homopolymers and Copolymers: Polymers which are formed by only one type of monomer are called Homopolymers. Some examples of homopolymers and their monomers are given below :

Polymers which are formed by only one type of monomer are called Homopolymers. Some examples of homopolymers and their monomers are given below :

Polymers, which are formed by more than one type of monomers are known as copolymers. Some examples are given below in the table:

Depending upon the distribution of monomer units, the following types of copolymers are possible.

If the two monomer units occur alternatively throughout the polymer chain, it is said to be alternating copolymer. For example,

The exact distribution depends upon the proportion of the two reactant monomers and their relative reactivities. In practice, neither perfectly random nor perfectly alternating copolymers are usually formed. However, most copolymers tend more towards alternating type but have many random imperfections.

Polymers in which different blocks of identical monomer units alternate with each other are called block copolymers.

Block copolymer can be prepared by initiating the radical polymerisation of one monomer to grow homopolymer chains followed by addition of an excess of the second monomer. 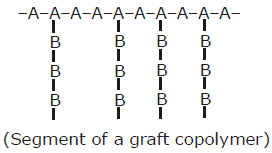 Polymers are classified in following ways:

(I) CLASSIFICATION BASED UPON SOURCE:

Natural polymers which take part in metabolic processes are known as biopolymers. Examples are polysaccharides, proteins, RNA and DNA.

(II) CLASSIFICATION BASED UPON SHAPE:

The chains are highly ordered with respect to one another. The structure is close packed in nature, due to which they have high densities, high melting point and high tensile (pulling) strength. Linear polymers can be converted into fibres.

(i) All fibers are linear polymers. Examples are cellulose, silk, nylon, terylene etc.

CLASSIFICATION BASED UPON SYNTHESIS:

(i) They are formed due to condensation reactions.

(v) Condensation polymers do not contain all atoms initially present in the monomers.

Some atoms are lost in the form of small molecules.