The document Doc: Rolling Motion Class 11 Notes | EduRev is a part of the Class 11 Course Physics For JEE.
All you need of Class 11 at this link: Class 11

A rolling body undergoes simultaneous rotational and translational motion. Friction is required to start rolling. Rolling without slipping is known as “pure rolling”. When the wheels roll without slipping, at any instant of time, the point of the wheel in contact with the surface is instantaneously at rest with respect to the surface. No static frictional force acts on the wheels when they are in pure rotation.

When a body like the wheel is in rolling motion, different particles of the body will experience different velocities. Let us study this by considering a disc of radius R rolling on a flat surface without slipping. 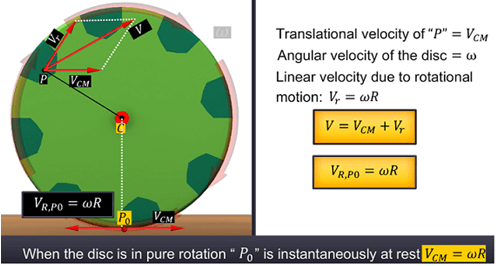 KE = KCM + Kr   =  ½ MVCM2 + ½ Iω2   While solving problems relating to the rolling of an object on an inclined surface, we can use two different methods. In the first method, we analyse the forces and torques acting on the object.  The second method involves the use of the Law of Conservation of Energy.