The document Drainage System - Geography UPSC Notes | EduRev is a part of the UPSC Course Geography for UPSC CSE.
All you need of UPSC at this link: UPSC

DIFFERENCES BETWEEN HIMALAYAN AND PENINSULAR RIVERSThere are significant differences in the drainage features and hydrological characteristics between the Himalayan and the Peninsular systems of rivers. They are:-

(i) Rivers falling into the Arabian Sea

(ii) The rivers falling into the Bay of Bengal

SUB-CONTINENTA Sub-Continent is a vast independent geographical unit. This land mass is distinctly separated from the main continent. The vastness in size produces a diversity in economic, social and cultural conditions. India is a vast country. It is often described as ‘Indian sub-continent’.

The Himalayan mountain system acts as a physical barrier separating the Indian sub-continent from the main land of Asia. India, Pakistan, Bangladesh, Nepal and Bhutan, combine together to form a sub-continent. The great mountain wall isolates these countries from Asia. 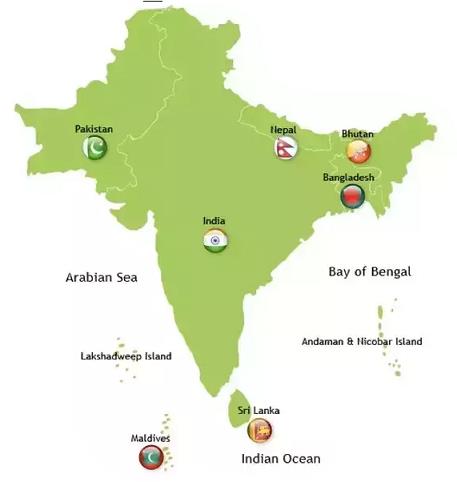 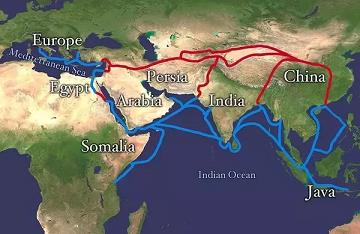 Central position of India in the Indian ocean

(iii) No other country has such a large coastline along the Indian Ocean. That is why it is named after the country of India.(iv) India lies on the trade routes of Europe and the far east passing through the Indian Ocean.(v) India occupies a centrally located strategic position in the eastern hemisphere. India is by far the most dominant country surrounding the Indian Ocean.

Characteristics of Western GhatsThe Western Ghats with an average height of 1200 meters run parallel to the west coast for 1600 km from Kanyakumari to the River Tapti. Its highest peaks are more than 1500 m.

The range rises almost perpendicularly from the narrow coastal plains. The land-scape is composed of step sided valley, narrow gorges and water falls of great magnitude.

Geomorphological features of the Himalayas with those of the Indian plateau

DRAINAGE SYSTEM OF NORTHERN INDIAMost of the rivers of Northern India originate from the Himalayas. These are perennial rivers as these are snow-fed rivers. Many rivers belong to the antecedent drainage system.

The northern plain has been formed by the deposition of sediments brought down by these rivers.This drainage system extends from Punjab to Assam and is divided into three systems:(i) The Indus system(ii) The Ganges system(iii) The Brahmaputra system

1. The Indus Drainage SystemIt is one of the world’s largest systems. It comprises the rivers of the Indus, the Jhelum, and the Chenab, flow in Pakistan.(i) The Sutlej: It originates from Rakshas Tal near Mansarovar lake across the Himalayas. It forms a deep gorge. It is 1448 km long and feeds the Bhakra canal.(ii) The Beas: It originates from the Beas Kund near Rohtang pass. It is 460 km long. It lies within the boundaries of Punjab state.(iii) The Ravi: The Ravi rises in Dhauladhar Hills. It enters the plains near Madhopur. It is 720 km long and forms a natural divide between India and Pakistan.2. The Ganges Drainage System(i) The Ganges - The Ganges is the most sacred river of India. The story of the Ganges from her source to the sea, from old times to new is the story of India’s civilisation and culture. The Ganges has its source near Gomukh glacier, near Gangotri. The Ganges is formed by two headstreams namely Alaknanda and Bhagirathi. It enters the plains near Hardwar. The Yamuna meets this river at Allahabad known as Sangam. The Ganges is the master stream of the area. South of Farakka, the river divides into a number of Channels to form ‘Sunder Ban’ Delta. The Ramganga, Ghaghra, Gandak, Baghmari join the Ganges from its left. The Yamuna and the Sone join it from the South. It is 2522 km long. Hardwar, Kanpur, Allahabad, Varanasi, Patna, and Culcutta are situated along the Ganga.(ii) The Yamuna - It is the most important tributary of the Ganga. It is 1375 km long. It rises from the Yamnotri Glacier. The Chambal, Betwa, and Ken rivers join the Yamuna from the South.(iii) The Kosi - The Kosi emerges from the great Himalayas. It flows for 730 km in Nepal and India. It is known for its notorious floods and called “River of Sorrow”3. The Brahmaputra SystemThe Brahmaputra river is the master stream of this system. It is 2880 km. long. It flows parallel to the Himalayas in Tibet and is known as Tsangpo, it enters India in Arunachal Pradesh through Dihang gorge. It is known for its notorious floods and silt deposits. It joins the Padma river in Bangladesh to form a large delta.