The document Ecosystems & Ecological Pyramids Notes | Study Biology Class 12 - NEET is a part of the NEET Course Biology Class 12.
All you need of NEET at this link: NEET

In a big ecosystem, many food chains are interlinked together on different trophic levels to form a food web. In the food web, the transfer of food energy is unidirectional but from many different alternative pathways.

In the food web members of a particular tropic level obtain their food according to their choice and taste but that type of facility is not present in the food chain. It means they have more than one option or alternative for getting food. 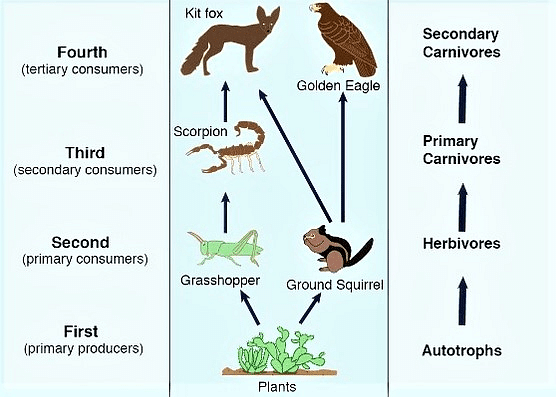 A science of self-control as (homeostasis) in an ecosystem is called cybernetics.

Graphical representation of ecological parameters at different tropic levels in the ecosystem is called pyramids.

These parameters are Number, Biomass and Energy. First of all, the pyramid was formed by Charles Elton; So we called it the Eltonian pyramids.

In pyramids basal, mid and top tiers show the parameter values for producer, herbivores and carnivores in the ecosystem.

Pyramids are of Three Types:

Pyramids of Number In this type of pyramid, the number of the individual organisms in various tropic levels is shown. These pyramids are mostly upright because the number of producers [T1] is maximum and No. of herbivores and carnivores decrease towards the apex or at successive tropic levels, such as Grassland ecosystem and aquatic ecosystem.

But in a tree ecosystem, the pyramid of numbers is inverted. This is called a parasitic ecosystem because birds (herbivores) depend on the tree (producer) and parasites (consumer) depend on birds, therefore with an increase in the number of tropic levels, the number of the organisms increases sequentially. 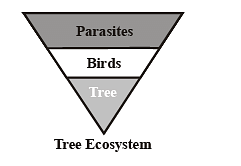 Pyramids of biomass represent the total amount of biomass of each tropic level of the ecosystem, mostly these pyramids are also upright (erect) e.g. (tree ecosystem), forest ecosystem.

Pyramids of biomass in an aquatic ecosystem are inverted because in it producers are micro-organisms and their biomass is very less.

Note: Pyramid of lake on the basis of biomass:

Some Special Points related to Biomass

Note: The pyramids of biomass show the standing crop of ecosystem.

Pyramids of EnergyIt represents amount of energy at different tropic levels, energy pyramids are always upright or erect because there is a gradual decrease in energy at successive tropic levels. According to the 10% law of Lindemann, the 90% part of obtained energy of each organism is utilized in their various metabolic activities and heat and only 10% energy is transferred to the next tropic level. So 90% energy is lost at each tropic level, therefore top consumers like lion etc. are ecologically weakest but physically they are strong.

Note: Pyramids of energy represent the productivity of ecosystem as well as transfer of production in ecosystem.

There are two types of productivity present:

Primary production is defined as the amount of biomass or organic matter produced per unit area over a time period by plants during photosynthesis. It is expressed in terms of weight (g/m2/yr) or energy (Kcal m–2). The rate of biomass production is called productivity. It is expressed in terms of g–2yr–1 or (Kcal m–2) yr–1 to compare the productivity of the different ecosystems. It can be divided into GPP and NPP.It is again divided into two types:

Secondary productivity is the rate of formation of new organic matter by consumers.

Net community productivity or Net productivity – The rate of storage of organic matter not used by the heterotrophs.

Some Information related to Productivity

The document Ecosystems & Ecological Pyramids Notes | Study Biology Class 12 - NEET is a part of the NEET Course Biology Class 12.
All you need of NEET at this link: NEET