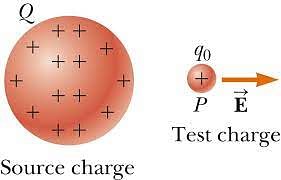 In simple words, Electrostatic force per unit positive test charge is defined as Electric Field due to the source charge.

is a vector quantity and its direction is same as that of force on the test charge. The unit and dimensions for Electric Field would be Newton/Coulomb  and [M1 L1 T-3I-1] respectively. 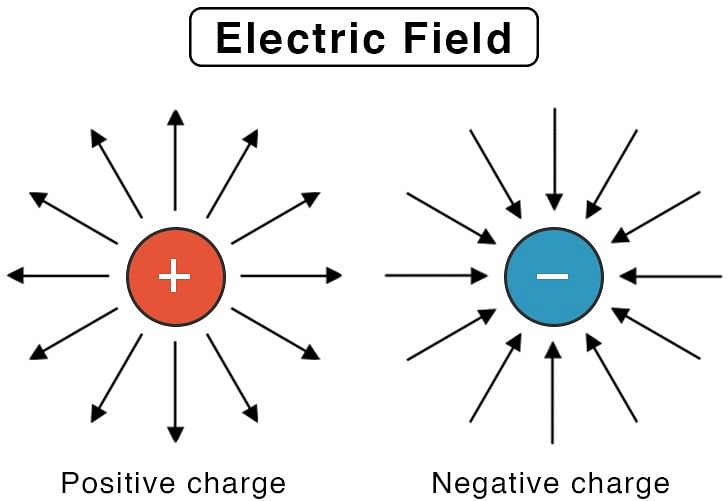 Now, if we bring any charge in this region, by Coulomb’s law, it will experience an electrostatic force. Now, the question arises, How do these charges realise that the other charge has come in its ‘territory’ or ‘region of influence’?

There are some points to always to be kept in mind. These are1. It is important to note that with every charged particle, there is an electric field associated which extends up to infinity.

2. No charged particle experiences force due to its own electric field. 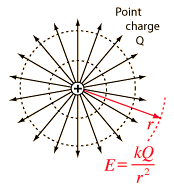 As discussed earlier, if we find the electric field due to a point charge at a distance r from it. Its magnitude can be given as

Note: That if the source charge is negative i.e. –Q then we can visualise the electric field by

This means, we can simply reverse the Electric field vector’s direction.Thus, Electric Field due to a point charge of magnitude + Q at a distance r from it is given by the expression KQ/r2 and its direction is along the line joining the source charge and the point of consideration.

Q. Why have we defined the concept of electric field? Is it really necessary? If eventually, we are measuring the electrostatic force, why can’t we do it directly using Coulomb’s Force?Ans. 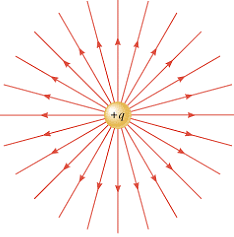 Note: That electric field lines of +2Q charge are twice in number than that of +Q. So, irrespective of the number of lines in each representation, the ratio must be maintained to 2.

Graph of Electric Field Due to Binary Charge 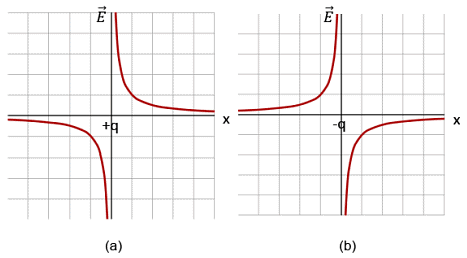 Try yourself:Which among the following is false about electric field lines?
Explanation

Electric lines of force are always diverging from positive charge and they converge at a negative charge. Besides, they repel each other because of repulsion between two similar charges. They remain parallel to each other in the uniform field but may divert in case of a non-uniform field. These lines are continuously stretched between two opposite charges and always try to maintain minimum length.

By solving above equation for x, we get x = 2m.Hence, at x = 2 between these two charged particles, there exists a point where net electric field due is zero i.e. neutral point.