1. DETERMINER:‘Determiner’ is a word used before a norm to indicate which things or people we are talking about. The words ‘a’, ‘the’, ‘my’, ‘this’, ‘some’, ‘many’, etc. are called determiners:

All the Bold words are determiners and they limit the meaning of the nouns that follow them. 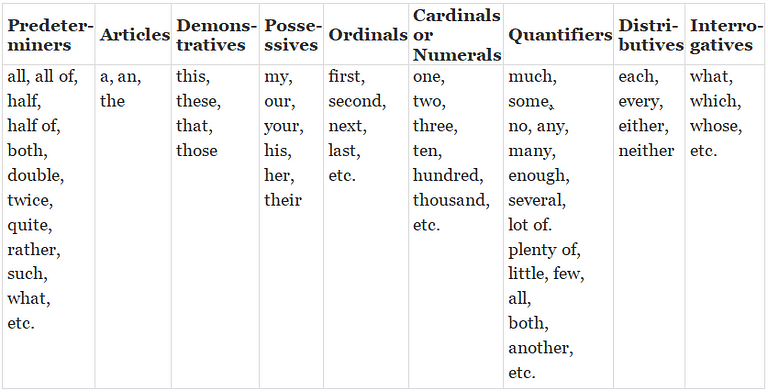 3. Pre-determiners:Pre-determiners are the words which occur before a determiner to limit the meaning of a noun:All the boys joined the race.He drank half of the milk.You will get all the information.she stayed there all of the time.Both the boys were present.He gets twice the pay that i get.He has rather a pleasant personalityWhat a mess you have made!I paid double the sum for this bed.It was quite a shockHe has such a beautiful wife.

The Definite Article ‘The’:

The Indefinite Articles-‘a’, ‘an’:The indefinite articles (‘a’, ‘an’) are used when we talk about people in a general or indefinite way.

5. Demonstratives: This, These, That, Those

The demonstrative determiners are used to talk about persons or things that have already been mentioned.

‘This’ and ‘that’ are used for singular nouns and ‘‘these’’ and ‘those’ for plural nouns.

6. Possessives: My, our, your, his, her, its, their. The possessives are used to show possession.

9. Quantifiers: much, some, several, a lot of, both, all, etc.The quantifiers refer to the quantity of things or amount of something.

10. Distributives: each, every, either, neither.Distributive determiners refer to each single member of a group.

Either is used to talk about two things, but usually indicates that only one of the two is involved. Either of the two girls should come here.

11. Interrogatives: what, which, whose, etc.The interrogative determiners are used for asking questions: