Evaluation of a Sprinkler HeadThe sprinkler head is evaluated based on the water distribution pattern from the sprinkler nozzle, discharge of sprinkler nozzle, radius of throw, sprinkler rotation and precipitation or water application depth collected in a standard catch can under set of condition specified in the BIS (IS: 10802-1984).40.1.1 Site Conditions and Test Equipment(i) Sprinkler site: The sprinkler should be located in an area where the surface is smooth or where vegetative growth is less than 150 mm in height. The surface grade should not exceed 2 percent within the wetted area of sprinkler under test.(ii) Collector Description and Location: The collectors or catch cans used for any one test should be such that the water does not splash in or out. The type of collector should be identified and recorded on the data sheet. If an evaporation suppressant is used its type and method of application should be identified and recorded on the data sheet. The spacing of the collectors depends on the radious of throw of the sprinklers and given in Table 40.1.Table 40.1. Spacing of collectors

(iii) Sprinkler mounting: The sprinkler nozzle height above the nearest collector(s) for test purposes is given in Table: 40.2.Table 40.2.  Nozzle heights 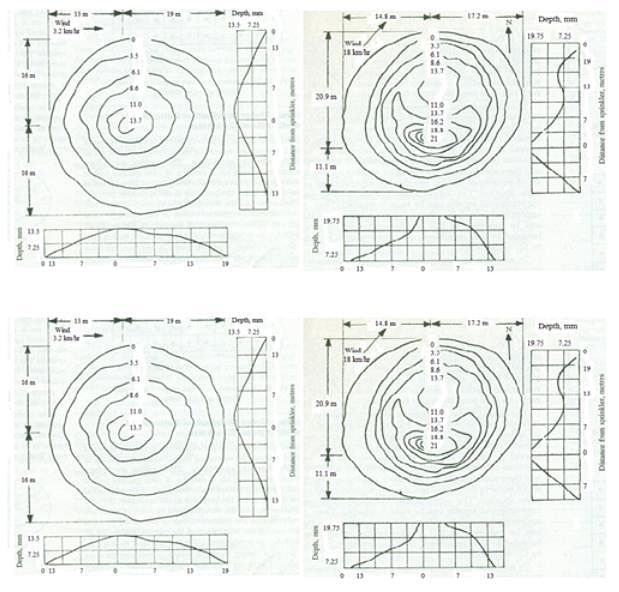 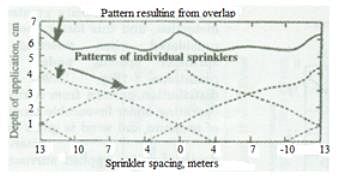 40.3 Uniformity of CoverageMeasuring Distributions: The distribution of  sprinkler systems can be evaluated by measuring the patterns of individual sprinklers, and then by combining, as discussed in the previous section, or by sampling directly, ASAE Recommendations S330 (ASAE Yearbook, 1979) describes procedures for measuring the distribution of a single sprinkler including the format for presenting the data. According to ASAE measurements the test site should be nearly level and the minimum clean distance upwind should be positioned at least 60 cm above the collectors, and 90cm above the surface. Preferably, the sprinkler should be located in the center of the grid of the four adjacent central collectors. A minimum of 80 collectors should receive water during a test. Wind direction and total wind movement at the 4-m height should be recorded for interpretation of the data. The distribution of a typical sprinkler system can be evaluated with a grid of catch cans or collectors. The grid should be located over a length equal to at least the sprinkler spacing on the lateral and over a width at least equal to lateral spacing. For linear moving systems, one or two lines of measuring devices perpendicular to the travel path may be more practical and meaningful than a grid system.

Uniformity Coefficients (Cu): It is a measurable index of the degree of uniformity obtainable for any size sprinkler operating under given conditions. This uniformity coefficient is affected by the pressure nozzle size relations, sprinkler spacing and by wind conditions. The coefficient is computed from field observations of the depths of water collected in catch cans or collectors placed at regular intervals within a sprinkled area as per procedure described in preceding sections. It is expressed by the equation developed by Christiansen (1942):

A uniformity coefficient of 100 per cent (obtained with overlapping sprinklers) is indicative of absolutely uniform application, whereas the water application is less uniform with a lower value of coefficient. A uniformity coefficient of 85 per cent or more is considered to be satisfactory.Pattern Efficiency: The pattern efficiency (also known as distribution efficiency)is  calculated with the total depths of water collected at each of the catch cans placed at the grid points. The minimum depth is calculated considering average of the lowest one fourth of the depths collected in catch cans used in a particular test. Pattern efficiency is given by

The application efficiency is given by

40.4 Operation and MaintenanceThe operation mode for a solid-set or permanent sprinkler system depends upon the design and use of the system, available labor, water supply, and available capital. Either system can be designed on the lateral or area (block) design method. With the lateral design method, individual laterals are controlled by valves and each lateral may be operated as desired. Normally, more than one lateral is operated simultaneously, but the operating laterals usually are widely separated in the field. The lateral design method minimizes the main or supply line pipe size, but it increases the number of valves required and also the time to open and close valves when a manually operated valve system is used. With the area (or block) design method, a contiguous portion of the field is irrigated at one time. Usually a sub-main is installed to supply water to that portion of the field.

For frost and snow protection, the entire system may be operated at one time. Depending upon the crop being protected, the application rate will be 2 to 5 mm (0.08 to 0.18 in.) per hour. Both under tree and over tree systems are used; however with saline water only under tree systems should be used. Single nozzle, medium pressure sprinklers should be used for frost and snow protection. For crop cooling and blossom delay, the entire system may be sequenced in alternate on-off modes as one portion of the system may be operated at a time and the operation can be switched to another portion of the system, Sequencing is best accomplished with electric controllers and automatic valves. If the system is being used strictly for irrigation, only a portion of the system is normally operated at one time. Where several hours are required for irrigation, control may be manual or automatic.

(b) Keep all nuts and bolt tight.

(c) Do not lay pipes on new damp concrete or on piles of fertilizer. Do not lay fertilizer sacks on the pipe.

The pipes are automatically emptied and ready to be moved. When the pump is first started and before the pressure has built up in the system the seals may give a little leakage. With full pressure in the system the couplers and fittings will be effectively leak free. If however there is a leakage check the following:

(b) The end of the pipe going inside the coupler is smooth clean and not distorted.

(c) In the case of fittings such as bends, tees and reducers ensure that the fitting has been properly connected into the coupler.(ii) Sprinkler Heads: The sprinkler heads should be given the following attention.

(c) Sprinkler usually have a sealed bearing and at the bottom of the bearing there are washers. Usually it is the washers that wear and not the more expensive metal parts. Check the washers for wear once a season or every six months this is especially important where water is sandy. Replace the washers if worn.

(d) After several seasons operation the swing arm spring may need tightening. This is done by pulling out the spring end at the top and rebending it. This will increase the spring tension. In general check all equipment at the end of the season and make any repairs and adjustment and order the spare parts immediately so that the equipment is in perfect condition to start in the next season.Storage: The following points are to be observed while storing the sprinkler equipment during the off season:

(a) Remove the sprinklers and store in a cool dry place.

(b) Remove the rubber sealing rings from the couplers and fittings and store them in a cool, dark place.

(c) The pipes can be stored outdoors in which cases they should be placed in racks with one end higher than the other. Do not store pipes along with fertilizer.

(e) Protect the electric motor from the ingress of dust, dampness and rodents.

40.5 Common Troubles and Remedies in Operation of Sprinkler System

The following are the general guidelines to identify and remove the common troubles in the sprinkler systems:

1. Pump does not Prime or Delivers Water

(i) The pump suction lift should be checked, if it is within the limits. If not lower the pump closer to the water.

(iv) Check that the flap in the foot valve in free to open fully.

(vi) Check that the gate valve on the delivery pipe is fully closed during priming and opens fully when the pump is running.

(vii) Check that the direction of rotation of the pump is correct.2. Sprinklers do not Turn

(ii) Check that the nozzle is not blocked. Preferably unscrew the nozzle or use a small soft piece of wood to clear the blockage. Do not use a piece of wire or metal as this may damage the nozzle.

(iii) Check that the sprinkler can usually be pushed down towards the riser pipes so that the water pressure flushes out the bearing. If the bearing is still stiff dismantle and then clean it. Do not use oil, grease or any lubricant.

(iv) Check that the condition of washers at the bottom of the bearing and replace then if worn or damaged.

(v) Check that the swing arm moves freely and that the spoon which moves into the water stream is not bent by comparing it with a sprinkler which is operating correctly. If it is bent then very carefully bend it back into position.

(vi) Adjust the swing arm spring tension. Usually it should not be necessary to pull up the spring by more than about 6mm.3. Leakage from Coupler or Fittings

The sealing rings in the couplers and fittings are usually designed to drain the water from the pipes when the pressure is turned off. This ensures that the pipes are automatically emptied and ready to be moved. When the pump is first started and before the pressure has built up in the system the seals may give a little leakage. With full pressure in the system the couplers and fittings will be effectively leak-free. If, however, there is a leakage, check the following:

(ii) The end of the pipe going inside the coupler is smooth, clean and not distorted.

(iii) In the case of fittings such as bends, tees and reducers ensure that the fitting has been properly connected into the coupler.