The document Ex 6.3 NCERT Solutions- Triangles Class 10 Notes | EduRev is a part of the Class 10 Course Class 10 Mathematics by VP Classes.
All you need of Class 10 at this link: Class 10

Q.1. State which pairs of triangles in Fig. are similar. Write the similarity criterion used by you for answering the question and also write the pairs of similar triangles in the symbolic form: 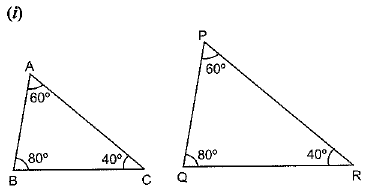 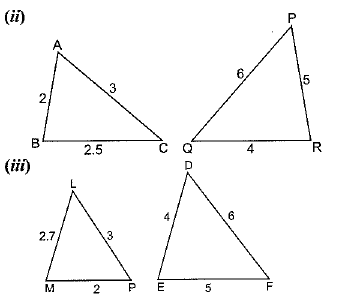 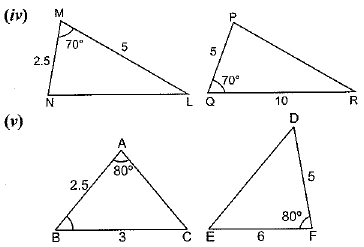 (v) In ΔABC and ΔDEF

Q.3. Diagonals AC and BD of a trapezium ABCD with AB || DC intersect each other at the point O. Using a similarity criterion for two triangles, show that

Sol. Given: Diagonals AC and BD intersect at O.

[Corresponding sides of similar triangles]Q.4. In the figure,

Q.8. E is a point on the side AD produced of a parallelogram ABCD and BE intersects CD at F. Show that Δ ABE ~ ΔCFB.
Sol.  In ΔABE and ΔCFB, Q.9. In the figure, ABC and AMP are two right triangles, right angled at B and M respectively. Prove that:
(i) Δ ABC ~ Δ AMP
(ii) [Ratio of the Corresponding sides of similar Δs]Q.10. CD and GH are respectively the bisectors of ∠ACB and ∠EGF such that D and H lie on sides AB and FE of Δ ABC and Δ EFG respectively. If ΔABC ~ ΔFEG, show that: (i)

Q.11. In the figure, E is a point on side CB produced of an isosceles triangle ABC with AB = AC. If AD ⊥BC and EF ⊥AC, prove that ΔABD ~ ΔECF. Q.12. Sides AB and BC and median AD of a triangle ABC are respectively proportional to sides PQ and QR and median PM of Δ PQR (see figure). Show that Δ ABC ~ ΔPQR.

Sol. In ΔABC and ΔPQR

Q.14. Sides AB and AC and median AD of a triangle ABC are respectively proportional to sides PQ and PR and median PM of another triangle PQR. Show that ΔABC ~ ΔPQR.
Sol. Construction: Draw DE || AC and MS || PR
Proof: In ΔABC, D is mid-point of BC (given) and DE || AC (const.) 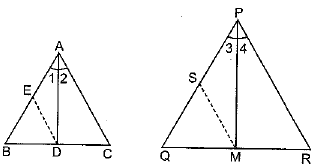 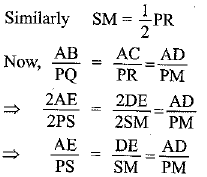 Now, in ΔABC and ΔPQR,

Q.16. If AD and PM are medians of triangles ABC and PQR, respectively where ΔABC ~ ΔPQR, prove that