Fiscal policy is the guiding force that helps the government decide how much money it should spend to support the economic activity, and how much revenue it must earn from the system, to keep the wheels of the economy running smoothly.For example: During an economic downturn, the government may decide to open up its coffers to spend more on building projects, welfare schemes, providing business incentives, etc. The aim is to help make more of productive money available to the people, free up some cash with the people so that they can spend it elsewhere, and encourage businesses to make investments. At the same time, the government may also decide to tax businesses and people a little less, thereby earning lesser revenue itself. 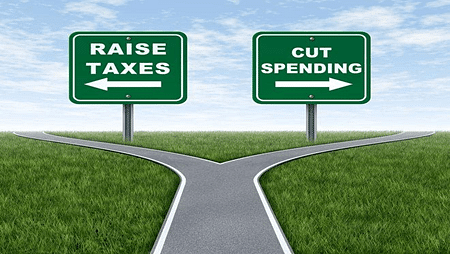 (a) Capital Expenditure: Capital expenditure is the expenditures made by the government to create physical or financial assets.

Capital expenditure either create an asset or causes a reduction in liabilities of the government.

(b) Capital Receipts: Capital receipts are those which create a liability on the government or reduce the assets.

View Solution
2. Revenue Account: A revenue account is an account with a credit balance. It includes all the revenue receipts and the revenue expenditure of the government.

Revenue Expenditure is divided into: 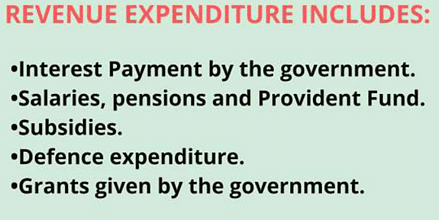 (b) Revenue Receipts: Revenue receipts are the current income to the government and they cannot be taken back from the government.

The Revenue receipts are divided into Tax and Non-Tax Revenue:

- Direct taxes (personal income tax, corporation tax) fall directly on a person.- Indirect taxes include (excise duties and customs duties) which are on goods produced in the country or goods that are exported and imported.

DEFICITS AND THEIR TYPES

What Is a Deficit?A deficit is an amount by which a resource, especially money, falls short of what is required. A deficit occurs when expenses exceed revenues, imports exceed exports, or liabilities exceed assets.In a deficit, the total of negative amounts is greater than the total of positive amounts. In other words, the outflow of money exceeds the inflow of funds. A deficit can occur when a government, company, or individual spends more than is received in a given period, usually a year. 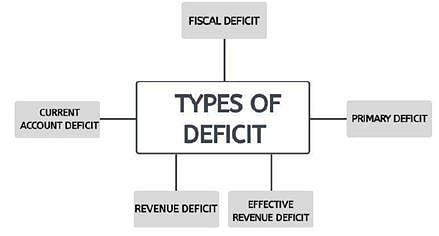 (i) Current account deficit is when a country imports more goods and services than it exports.

(ii) A fiscal deficit occurs when a government's total expenditures exceed the revenue that it generates, excluding money from borrowings.

(iv) Revenue deficit relates only to the government: It describes the shortfall of total revenue receipts compared to total revenue expenditures.

(v) Effective Revenue Deficit is the difference between revenue deficit and grants for the creation of capital assets.

The objective of this FRBM Act is to impose fiscal discipline on the government.

It means fiscal policy should be conducted in a disciplined manner or in a responsible manner i.e. government deficits or borrowings should be kept within reasonable limits and the government should plan its expenditure in accordance with its revenues so that the borrowing should be within limits.Targets under this FRBM Act 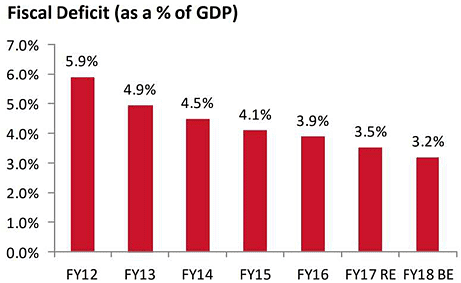 Better Approach Is That Resources Should Be Raised from Taxes, User Charges, Disinvestment Etc.Expenditure Control Should Not Involve Cost Cuts on Important Social Schemes Like Mgnrega Etc.