Absorption is a process where transfer of a gaseous component from gas phase to liquid phase takes place. More specifically in air pollution control, absorption involves the removal of objectionable gaseous contaminant from a process stream by dissolving them in liquid. Common terms used in absorption process are as follows:

1. Absorbent: the liquid, usually water, into which contaminant is absorbed

2. Absorbate or solute : The gaseous contaminant being absorbed, such as SO2, H2S, etc.

3. Carrier gas: the inert portion of gas stream, usually air, from which the contaminant is to be removed .

4. Interface: the area where the gas phase and the absorbent contact each other.

5. Solubility: the capability of the gas to be dissolved in a liquid.

Absorption equipment used to remove gaseous contaminants are referred to as absorber or wet scrubber. Wet scrubbers usually cannot be operated to optimize simultaneous removal of both gases and particulate matter. In designing absorber from gaseous emissions, optimum mass transfer can be accomplished by:

3. Allowing sufficient residence or contact time between the phases.

4. Ensuring a high degree of solubility of the contaminant in the absorbent .

The gaseous contaminant are removed in absorption process by passing (contacting) a contaminated laden gas through a liquid. The following three steps occur during this process:

Step1: The pollutant diffuses from bulk area of the gas phases to the gas liquid interface.

Step2: gaseous pollutant transfer across the interface to the liquid phase. This second step is extremely rapid.

Solubility of contaminant affects the amount of contaminant that can be adsorbed. It is a function of both the temperature and, to a lesser extent pressure of a system. As we increase the temperature of the system the amount of gas that can be absorbed by liquid decreases, while as with increasing the pressure generally absorption increases. The solubility data are analyzed by equilibrium diagram [2].

1. Henry’s law can be used to predict solubility only when the equilibrium line is straight. 2. Henry’s law does not hold good for gases that react or dissociate upon dissolution.

Spray towers are useful for large volume handling with relatively low pressure drop and high efficiency. In general smaller the droplet size the greater the turbulence, the more chance for absorption of the gas. Absorbing liquid usually water is sprayed through the contaminated gas and the absorbent contaminant solution falls downwards for removal while clean gas exits through an outlet valve in the top of unit. Moisture eliminator reduces the amount of moisture in the gases being released. Spray tower has less gas liquid interfacial area so they are less effective in removal of gaseous contaminant. 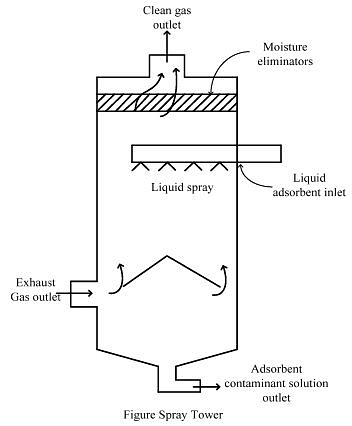 This type of tray contains horizontal trays or plate that provides large gas liquid interfacial areas. The polluted air is introduced from one side of the bottom of the column, rise up through the opening in each tray, and the rising gas prevents the liquid from draining through the opening. Due to repeated contact of gas and liquid the contaminant are removed and the clean air emerges from the top. In bubble cap tray column, the contaminated gas moves upward until they strike the cap, at which point they are diverted downward and discharged as small bubbles from slots at the bottom of the caps [3]. Since gas continues flow in upward direction so repeated interaction takes place and contaminated gas is removed and clean gas emerged from the top. The contaminantladen liquid flows to the bottom and is drawn off. 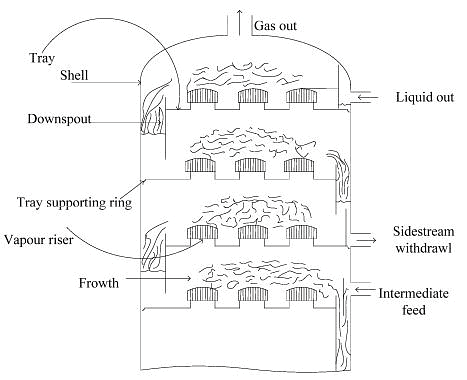 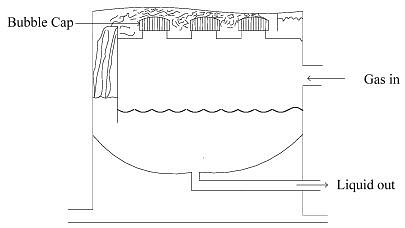 PACKED TOWER: In packed tower the contact time between vapour and liquid is increased by introducing packing. The packing material has a large surface to volume ratio and a large void ratio that offers minimum resistance to gas flow. Generally packed tower are operated counter currently, with gas entering at the bottom of tower and liquid entering from the top. Liquid flows over the surface of the packing in a thin film causing continuous contact with the gases.

Packed towers are highly efficient but they become easily clogged when gas with high particulate loads are introduced. 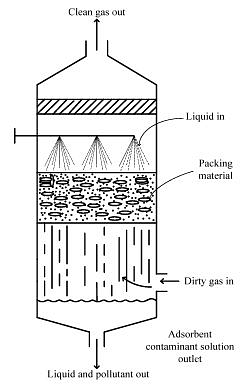