The total of the electric flux out of a closed surface is equal to the charge enclosed divided by the permittivity.

The electric flux through an area is defined as the electric field multiplied by the area of the surface projected in a plane perpendicular to the field. Gauss's Law is a general law applying to any closed surface. It is an important tool since it permits the assessment of the amount of enclosed charge by mapping the field on a surface outside the charge distribution. For geometries of sufficient symmetry, it simplifies the calculation of the electric field.

Another way of visualizing this is to consider a probe of area A which can measure the electric field perpendicular to that area. If it picks any closed surface and steps over that surface, measuring the perpendicular field times its area, it will obtain a measure of the net electric charge within the surface, no matter how that internal charge is configured.

The area integral of the electric field over any closed surface is equal to the net chargeenclosed in the surface divided by the permittivity of space. Gauss' law is a form of one of Maxwell's equations, the four fundamental equations for electricity and magnetism. Gauss' law permits the evaluation of the electric field in many practical situations by forming a symmetric Gaussian surface surrounding a charge distribution and evaluating the electric flux through that surface.

The concept of electric flux is useful in association with Gauss' law. The electric flux through a planar area is defined as the electric field times the component of the area perpendicular to the field. If the area is not planar, then the evaluation of the flux generally requires an area integralsince the angle will be continually changing. 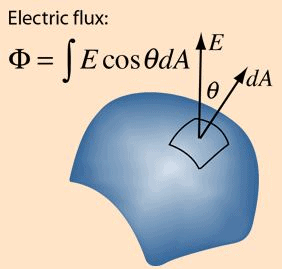 Gauss' law is a powerful tool for the calculation of electric fields when they originate from charge distributions of sufficient symmetry to apply it. If the charge distribution lacks sufficient symmetry for the application of Gauss' law, then the field must be found by summing the point charge fields of individual charge elements.

The electric field of a line of charge can be found by superposing the point charge fields of infinitesmal charge elements. The radial part of the field from a charge element is given by

The integral required to obtain the field expression is

The electric fields in the xy plane cancel by symmetry, and the z-components from charge elements can be simply added.

If the charge is characterized by an area density and the ring by an incremental width dR' , then: 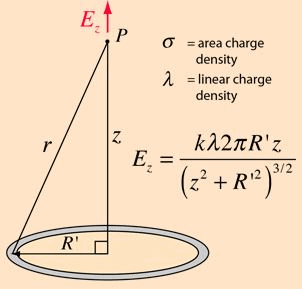 This is a suitable element for the calculation of the electric field of a charged disc.

The electric field of a disc of charge can be found by superposing the point charge fields of infinitesmal charge elements. This can be facilitated by summing the fields of charged rings. The integral over the charged disc takes the form