What is graph ?
Network = graph Informally a graph is a set of nodes joined by a set of lines or arrows. 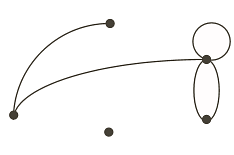 From a circuit to its graph: There is a node exist b/w two elements of a circuit. All the active source are represented by its internal impedance characteristic.Hence graph for a given network such as 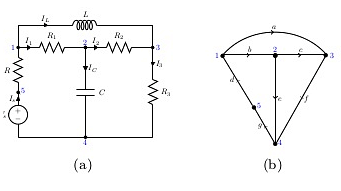 Directed (or Oriented) graph: A graph is said to be directed (or oriented) when all the nodes and branches are numbered or direction assigned to the branches by an arrow. As shown in above graph.

(vii) Trees:  It is an interconnected open set of branches which include all the nodes of the given graph. In a tree of the graph, there can’t be any closed loop.(viii) Co Tree: The different types of an interconnected open set of original tree named as co-tree.(ix) Tree branch(Twig): It is the branch of a tree. It is also named as twigs. Represented by a continuous line in a tree.(x) Tree link(or chord): It is the branch of a graph that does not belong to the particular tree.  Represented by hashed line in a tree.Relation between twigs and links-{L= B-(N-1)} {No. of twigs= N-1}N = no. of nodesL = total no. of linksB = total no. of branches 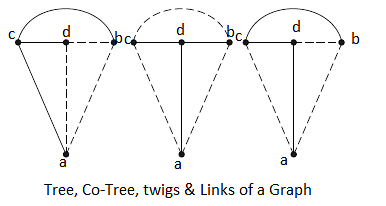 The number of possible trees of a graph, = det {[A] x [A]T}where [A] Reduced incident Matrix, obtained by eliminating any one row of incident Matrix.Properties of a Tree-(a) It consists of all the nodes of the graph.(b) If the graph has N nodes, then the tree has (N-1) branch.(c) There will be no closed path in a tree.(d) There can be many possible different trees for a given graph depending on the no. of nodes and branches.(xi) Directed (or Oriented) graph: A graph is said to be directed (or oriented ) when all the nodes and branches are numbered or direction assigned to the branches by an arrow.(xii) Connected Graph: When at least one path along branches between every pair of a graph exists, it is called a connected graph.(xiii) Sub graph: A graph said to be sub-graph of a graph G if every node of is a node of G and every branch of is also a branch of G.(xiv) Planer & Non-Planer graph:  Graph A is planar since no link is overlapping with another. Graph B is non-planar since many links are overlapping. 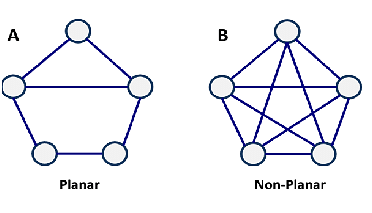 whereAi is the Incidence Matrix.

whereA is the Reduced Incidence Matrix.

So, KVL equation ⇒ V1 - V2 + V4 = 0, V2 - V3 + V5 = 0Tie-Set Matrix is also Called Fundamental Loop Matrix3.Cut-Set Matrix        The fundamental cut set is a cut through a given graph which divides into two parts but in its path of cutting it should encounter only one twig. The path of cut set forms a voltage line, it is called as cut set voltage. The orientation of this cut–set voltage is given by the twig governing it.The number of cut set for any graph = n – 1 = number of twigs. 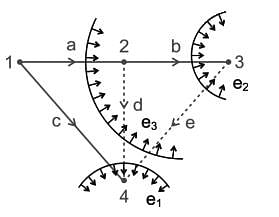