What is a Half Wave Rectifier?

But the diode is only part of it – a complete half-wave rectifier circuit consists of 3 main parts:

A half wave rectifier circuit diagram looks like this:

We’ll now go through the process of how a half-wave rectifier converts an AC voltage to a DC output. First, a high AC voltage is applied to the to the primary side of the step-down transformer and we will get a low voltage at the secondary winding which will be applied to the diode. 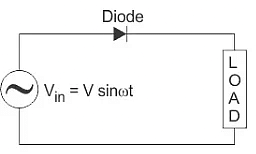 Now we don’t have the transformer part of the circuit distracting us.For the positive half cycle of the AC source voltage, the equivalent circuit effectively becomes:

This is because the diode is forward biased, and is hence allowing current to pass through. So we have a closed circuit.But for the negative half cycle of the AC source voltage, the equivalent circuit becomes:

Because the diode is now in reverse bias mode, no current is able to pass through it. As such, we now have an open circuit. Since current can not flow through to the load during this time, the output voltage is equal to zero. This all happens very quickly – since an AC waveform will oscillate between positive and negative many times each second (depending on the frequency). Here’s what the half wave rectifier waveform looks like on the input side (Vin), and what it looks like on the output side (Vout) after rectification (i.e. conversion from AC to DC): 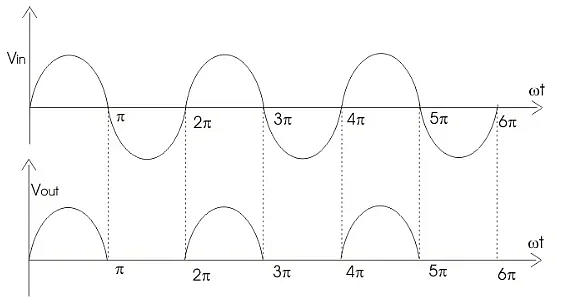 We will now derive the various formulas for a half wave rectifier based on the preceding theory and graphs above.

Ripple Factor of Half Wave Rectifier

The formula for ripple factor is:

Which can also be rearranged to equal:

The ripple factor of half wave rectifier is equal to 1.21 (i.e. γ = 1.21). Note that for us to construct a good rectifier, we want to keep the ripple factor as low as possible. This is why we use capacitors and inductors as filters to reduce the ripples in the circuit.

Efficiency of Half Wave Rectifier

Rectifier efficiency (η) is the ratio between the output DC power and the input AC power. The formula for the efficiency is equal to:

RMS value of Half Wave Rectifier

To derive the RMS value of half wave rectifier, we need to calculate the current across the load. If the instantaneous load current is equal to iL = Imsinωt, then the average of load current (IDC) is equal to:

Where Im= Imax which is equal to the peak instantaneous current across the load.Peak Inverse Voltage of Half Wave Rectifier

Form Factor of Half Wave Rectifier

Form factor (F.F) is the ratio between RMS value and average value, as shown in the formula below:

The output voltage (VDC) across the load resistor is denoted by:

Applications of Half Wave Rectifier

Advantages of Half Wave Rectifier

Disadvantages of Half Wave Rectifier

The three-phase voltages are shown below.

So we can see from the above figure that the diode D1 conducts when the R phase has a value of thevoltage that is higher than the value of the voltage of the other two phases,and this condition begins when the R phase is at a 30o and repeats after every complete cycle. That is to say, the next time diode DI begins to conduct is at 390o. Diode D2 takes over conduction from D1 which stops conducting at angle 150o because at this instant the value of voltage in B phase becomes higher than the voltages in the other two phases. So each diode conducts for an angle of 150o – 30o = 120o.Here, the waveform of the resulting DC voltage signal is not purely DC as it is not flat,but rather it contains a ripple. And the frequency of the ripple is 3 × 50 = 150 Hz.The average of the output voltage across the resistive load is given by

The RMS value of the output voltage is given by

The ripple voltage is equal to,

And the voltage ripple factor is equal to,

The equation above shows that the voltage ripple is significant. This is undesirable as this leads to unnecessary power loss.DC output power,