Similarly, another number 114560 can be represented as the product of its prime factors by using the prime factorization method,

So, we have factorized 114560 as the product of the power of its primes. 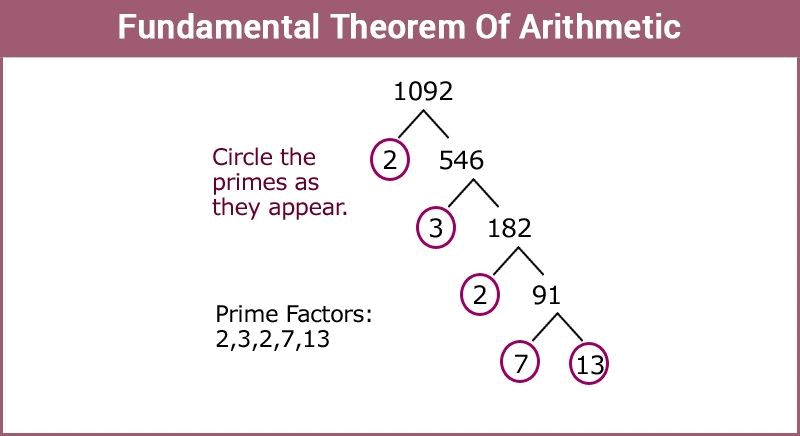 Proof for Fundamental Theorem of Arithmetic

In number theory, a composite number is expressed in the form of the product of primes and this factorization is unique apart from the order in which the prime factor occurs.

From this theorem we can also see that not only a composite number can be factorized as the product of their primes but also for each composite number the factorization is unique, not taking into consideration the order of occurrence of the prime factors.

In simple words, there exists only a single way to represent a natural number by the product of prime factors. This fact can also be stated as:

The prime factorization of any natural number is said to be unique for except the order of their factors.

In general, a composite number “a” can be expressed as,

Writing the primes in ascending order makes the factorization unique in nature.

Question: In a formula racing competition the time taken by two racing cars A and B to complete 1 round of the track is 30 minutes and 45 minutes respectively. After how much time will the cars meet again at the starting point?

As the time taken by car B is more compared to that of A to complete one round therefore it can be assumed that A will reach early and both the cars will meet again when A has already reached the starting point. This time can be calculated by finding the L.C.M of the time taken by each.

Thus, both cars will meet at the starting point after 90 minutes.

If any natural number has only two factors i.e. 1 and the number itself as its factors, such numbers are called prime numbers.

The largest or greatest factor common to any two or more given natural numbers is termed as the HCF of given numbers. Also known as GCD (Greatest Common Divisor).

The simplest method of deriving the HCF is to simply list all the factors of the given number, identify all common factors, and choose the greatest of all the common factors, arriving at your Highest Common Factor(HCF).

2. Prime FactorizationGiven natural numbers are written as the product of prime factors. To obtain the highest common factor multiply all the common prime factors with the lowest degree (power). Example: 20 = 2 × 2 × 512 = 2 × 2 × 3HCF = 2 × 2 = 43. Continued DivisionThis method is used when we have to find the HCF of relatively larger numbers. 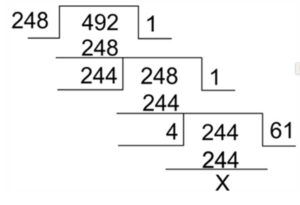 Step 1: Divide the larger number by the smaller number

Step 4: The divisor of the last division (when remainder is zero) is your HCF.

If the numbers given are decimal numbers, the method of finding HCF is very much similar to the Prime Factorization method, with a little modification.

Now we express both numbers, without decimals, as a product of their prime numbers

Therefore the HCF of the two fractions is 1/35.

Ques: Find the greatest number that divides 167 and 95, leaving 5 as the remainder.

Sol: Although the question sounds complicated, the solution is a simple application of HCF.

A multiple of a number is a number that is the product of a given number and some other natural number. Multiples can be observed in a multiplication table.

Multiples of 2 are as follows:

Least Common Multiple (L.C.M)The least or smallest common multiple of any two or more given natural numbers are termed as LCM. Example:

Methods of calculating Lowest Common Multiple1. Listing all the Multiples

This is the simplest method of finding the LCM of any given numbers. You write down several multiples of both the numbers and then identify the smallest common multiple among them. Step 1: Write all the numbers in the first row divided by commas

Step 2: We divide the numbers by the lowest and most suitable prime number (should exactly divide at least 2 numbers)

Step 3: Write the quotient of the division in the next row, If the number is not exactly divisible by the prime number, bring it down as it is

Step 4: Continue to do the above steps, till only co-prime numbers are left in the last row.

Step 5: Multiply all prime numbers by which we have divided and all co-prime numbers left in the last row, This is your LCM

Co-relation between HCF and LCM

Applications of LCM and HCF

Now there are various real-life applications of LCM and HCF. The best way to understand these and grasp the concept of LCM and HCF is to learn via examples. So let us take a look at a few examples which will help you understand LCM and HCF.

Example 2: A, B, and C start to jog around a circular stadium. They complete their rounds in 36 seconds, 48 seconds and 42 seconds respectively. After how many seconds will they be together at the starting point?Sol: The required time is the LCM of all their lap times. This is the earliest when all three will intersect at the same point.The required time is the LCM (36,48,42)