Human digestive system consists of the alimentary canal and digestive glands and it involves mastication, swallowing, digestion of food and elimination of undigested matter.

The alimentary canal is basically a long tube extending from the mouth to the anus.

It is differentiated into following parts: 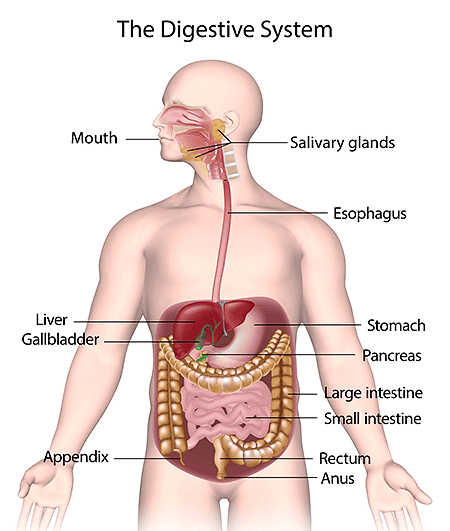 (1) Mouth: It is a transverse slit bounded by movable lips. The lips serve to close and open mouth, holding the food in between and also help in speaking.

(2) Buccopharyngeal cavity / Mouth cavity: Mouth leads into the mouth cavity or oral or buccal cavity. The roof of mouth cavity is formed by palates i.e., hard and soft palate, the floor by tongue and the sides by the cheeks. The other conspicuous structures are the teeth and salivary glands.

(a) Tongue: The floor of the mouth cavity is occupied by muscular, large, mobile tongue. It remains attached on its undersurface to the floor by fold of mucous membrane called the lingual frenum. The tongue is covered with mucous membrane and its upper surface is raised into lingual papillae which contain microscopic taste buds.

(i) Lingual papillae: Our tongue has a rough uppper surface due to three types of lingual papillae filiform, fungiform and circumvallate.

(b) Teeth: Thecodont (Teeth present in bony socket), Heterodont (Teeth are of four types) and diphyodont (Teeth that come two time in life).

Teeth are of following types:

How can the dental caries be prevented?

(c) Palate: The septum like structure which separates nasal path from oral path. The hard palate is the anterior part of the roof of mouth cavity. It is supported by palatine and maxillary bones that is why it is known as hard palate. There are no premaxillary bones present in our hard palate. The lower surface of hard palate covered with mucous membrane of mouth cavity is raised into transverse ridges called palatine rugae which serve to grip the food firmly. Soft palate is the posterior muscular part having no skeletal support. It carries a fleshy cone shaped projection called uvula which hangs down from it in the middle line. Uvula serve to block the internal nares during swallowing by rising up, preventing entry of food in the nasal cavities. 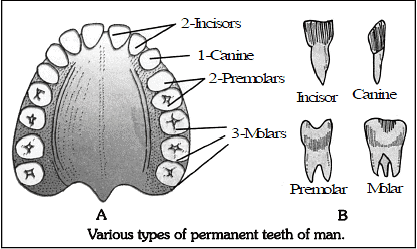 (iii) Pharynx: The buccal cavity opens into a short narrow chamber called pharynx or throat. Pharynx is incompletely divided into three parts by soft palate the nasopharynx dorsal to the soft palate, oropharynx below the soft palate and laryngopharynx into which both these parts communicate round the freely hanging uvula. The oropharynx and laryngopharynx are associated with swallowing. The laryngopharynx communicates with oesophagus through gullet and with larynx through glottis. The glottis is guarded by an elastic and muscular flap called epiglottis which closes glottis during swallowing to prevent food from entering into wind pipe. Thus pharynx serves two ways (i) as a passage between nose and wind pipe (trachea) (ii) as food passage between mouth cavity and oesophagus. Resonance of voice also occurs due to pharynx.

(iv) Oesophagus (food pipe): It conducts the food by peristalsis. The oesophagus is a collapsible muscular tube 25-30 cm long and about 25-30 mm thick, leading from the pharynx to stomach. It runs down the neck, behind trachea and through thorax, finally piercing the diaphragm to open into stomach. The upper 1/3rd part is composed of voluntary muscles and the lower 2/3rd of involuntary muscles. The muscular coat has a peristaltic action for driving the food towards the stomach. There are no digestive glands but only mucous glands in oesophagus.

(v) Stomach: It is a thick, muscular and J-shaped sac present on the left side of upper part of abdomen. Beneath diaphragm lying to the left side of abdomen is sickle-shaped stomach. It is the widest part of alimentary canal, size and shape of which varies according to the contents and sex. The stomach of a woman in general is more slender and smaller than that of a man. It can be distinguished into three regions: Fundus part, Body part and Pyloric parts. Pyloric part is the lower end of stomach which narrows down like a funnel and curves to the right like 'J' leading into duodenum. The exit is guarded by a pyloric sphincter or pylorus. The partly digested paste like food is forced into intestine through pyloric sphincter, due to peristaltic waves of stomach.

Intestine: It is distinguished into two parts:

(a) Small Intestine (b) Large Intestine

(a) Small intestine:  It is a long (about 6 meter) narrow (average diameter 4 cm), tubular and coiled part. It is differentiated into anterior duodenum, middle jejunum and posterior ileum. It is mainly concerned with completion of digestion and absorption of food.

(i) Duodenum: This proximal part starts after pyloric end of stomach. It is about 25 cm long lying against the posterior abdominal wall. It is curved like 'C' or a horseshoe and ends behind the stomach. A common bile duct and a pancreatic duct opens in middle of 'C' of duodenum by a common aperture over a raised area called ampulla of vater.

(ii) Jejunum: The Jejunum (a latin word meaning empty) is so called because it is always found empty after death.Functions of Jejunum

(iii) Ileum: It is the last part of small intestine.

(b) Large intestine: It is shorter (about 1.5 meter) and wider (Average diameter 6 cm) than small intestine. It is differentiated into caecum, colon and rectum. It is the site of absorption of water from digested food. It helps in formation and temporary storage of faeces.

Caecum is vestigeal in human beings.

Anus: It lies at the base of trunk and is for egestion.

[B] Digestive glands: They secrete digestive juices which contain digestive enzymes. These are of following types:

(i) Salivary glands: In man, there are three pairs of salivary glands. These secrete saliva which contains a digestive enzyme called ptyalin or Salivary amylase.

Our mouth starts watering on eating food of our interest. This water is basically the saliva secreted by the salivary gland which get activated on eating or seeing or thinking of a food.

(v) Intestinal glands: These lie in the wall of small intestine and secrete intestinal juice.

(i) Ingestion: Man is omnivorous in feeding and is holozoic.

Ingestion involves carrying the food to the mouth with the help of hands and cutting of food with incisors or canines depending upon the nature of food.

(ii) Digestion: In man, digestion is started in buccal cavity and completed in intestine.

(a) Buccal cavity: Here, food is chewed with the help of premolars and molars which increases the rate of action of salivary amylase. Food is mixed with saliva of salivary gland.

(b) In stomach: Food is mixed with gastric juice which contains mucus, hydrochloric acid, pepsin, rennin and a weak lipase enzyme.

Mucus, lubricates the food and protects the inner lining of the stomach from the action of acids.

Curdling of milk is done by the enzyme rennin. (Rennin is not found in human beings, it found only in cattles)

(c) In small intestine: The small intestine is the site of the complete digestion of carbohydrates, proteins and fats. Food is mixed with three digestive juices, bile juice, pancreatic juice and intestinal juice. Bile juice provide alkaline medium and emulsifies fats [conversion of larger fat globules into smaller fat droplets] but is a non enzymatic digestive juice so has no chemical action on food. Pancreatic juice contains trypsin, pancreatic amylase and pancreatic lipase enzymes which digest the peptones, starch and fats into peptides, maltose and fatty acids.

(iii) Absorption: Absorption of the digested food occurs through the epithelial surface of the villi & microvilli of small intestine.

Each cell of villus is with electron microscopic processes called microvilli.

Each villus is with blood capillaries and a lymph capillary.

(iv) Assimilation: It is a process by which absorbed nutrients are utilized to re-synthesize complex molecules like carbohydrates, proteins and fats inside the cells.

(v) Egestion: Removal of waste products from the body is known as egestion. 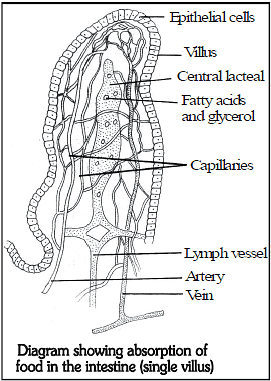 Points to be Remember