EXCRETION :The biological process of removal of harmful nitrogenous wastes from the body is called excretion.

The waste products in animals include :

(i) Nitrogenous compounds like ammonia, urea and uric acid.

Ammonotelic organisms are those which excrete ammonia. e.g. most aquatic animals.

– A pair of kidneys

– A pair of ureters. 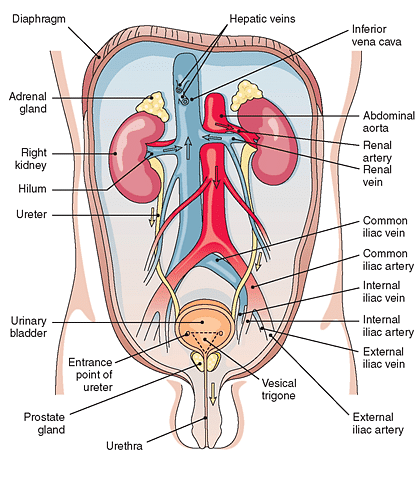 KIDNEY : • The main excretory organ of our body are kidneys.

• Each kidney is surrounded and covered by a tough, fibrous, capsule of connective tissues. This capsule is called renal capsule.

• Lateral surfaces of kidney are convex while medial surfaces are concave.

• On the inner border of each kidney is a depression called hilum/hilus.

The human kidney are not located at similar positions due to presence of liver above right kidney, so the right kidney get slightly lower position.

• The internal structure of kidneys can be divided into two parts.

• Nephron is the structural and functional unit of excretion.

• A nephron consists of a long coiled tubule differentiated into proximal nephron, loop of Henle and distal nephron. The latter opens into the collecting tubule.

• At the proximal end of the nephron, a double walled cup-shaped structure is present called Bowman's capsule.

• It consists of network of capillaries called glomerulus. 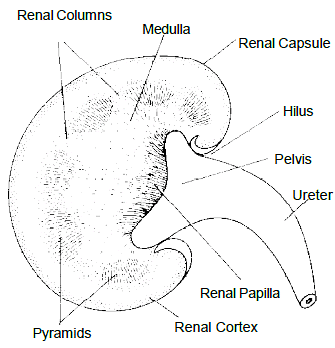 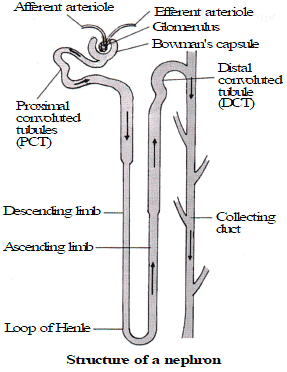 • One end of the glomerulus is attached to renal artery and the other end to the renal vein.

• The function of glomerulus is to filter the blood passing through it. This process is called ultrafiltration.

Nephron is the structural and functional unit of kidney, which is about 3 cm long and 20-60 μm in diameter.

Each kidney has about one million nephrons in humans.

A nephron can be divided into three regions :

(I) Proximal nephron : Nephron tubule is closed at its proximal (starting) end but its distal end is open and continues into the loop of Henle. At the proximal or closed end the nephron is expanded and curved inwardly to form a double-walled cup shaped Bowman's capsule. Within the Bowman's capsule a network or tuft of capillaries is present, it is called glomerulus. Diameter of afferent arteriole is greater than efferent arteriole.

Malpighian corpuscle : Glomerulus and its surrounding Bowman's capsule together form this specialized structure.

The distal convoluted tubules of a number of adjacent nephrons open into a common collecting duct or tubule.

• The collecting ducts open into the ureter.

• Each ureter originate from interior part of kidney.

• The anterior part of the ureter is broad, like a funnel and called pelvis and its posterior part is in the form of long tubule.

• Each ureter opens into the urinary bladder.

• The structure of urinary bladder is muscular sac like and pear shaped.

• Its wall is flexible, it collects urine when necessary by the contraction of muscles, the urine is excreted through urethra.

Micturition : • Micturition is the term used for urination. (Passing out of urine)

– Regulation of acid base balance.

– Excretion of metabolic waste and foreign chemicals.Physiology of Excretion :-

• The impure blood enters to each kidney through renal artery.

• The afferent arterioles which is branch of renal artery provides blood to the glomerulus.

• Glomerulus is a group of blood capillaries formed by division of afferent arterioles located in Bowman capsule.

• The arterioles which carry blood away from glomerulus are called efferent arterioles.

• Due to the blood pressure,  water, glucose, urea, uric acid and some salt from the blood of afferent arteriole filter in Bowman capsule through ultra-filtration.

• It also contains glucose, amino acid and some useful salts along with filtrate.

• This liquid from the Bowman capsule moves through the glandular part of the nephron.

• From glucose, useful salt and some part of water is reabsorbed. The amount of water reabsorbed depends on how much excess water there is in the body and on how much of dissolved waste there is to be excreted.

• The urine from the nephron is collected in urinary bladder through ureter.

• Urine is stored in the urinary bladder until the pressure of the expanded bladder leads to the urge to pass it out through the urethra.

• By the contraction of muscles of urinary bladder, the urine passes out of the body when necessary.

• This activity is called homeostatic activity.

• Usually the homeostatic activities are performed by excretory organ.

• They not only excrete out salts and nitrogenous waste products but also perform important role of water balance.

The process of maintaining the right amount of water and proper ionic balance in the body is called osmoregulation.

Walls of glomerulus and Bowman's capsule are thin and semipermeable membrane. In the glomerulus there are many minute pores present.

Due to this pressure, separation of small, selective molecules ions from the large molecules in the blood occurs and called ultrafiltration. Fluid which is filtered out from the blood is called as glomerulus filterate / capsuler filtrate / ultrafiltrate.

Glucose, salts, amino acids and water are reabsorbed by various parts of nephron and finallly they enter into the surroundings blood capillaries.

(iii) Tubular secretion :- It is removal of wastes from the surrounding blood capillaries into the glomerular filtrate.

Glomerular filtrate entering collecting duct is called urine. Urine composition is different from filtrate by the loss as well as gain of many substances during the course of nephrons.

• The healthy human being has 95% water, 5% urea, uric acid and salts of phosphoric acid.

• A young and healthy person excretes 1.5-1.8 litres urine per day.

• This quantity may increase due to intake of tea, coffee, wine etc.

It is secreted by pituitary gland, it promotes the reabsorption of water through nephrons. (DCT part)

(ii) Aldosterone :- It is secreted by Adrenal gland. Aldosterone promotes the reabsorption of salts (Na+) in the nephron (DCT part) i.e. it checks the loss of Na+ ions through urine.

Role of lungs in excretion: Human lungs eliminate around 18L of CO2 per hour and about 400ml of water per day in normal resting condition. Water loss via the lungs is small in hot humid climate and large in cold dry climates.

Role of liver in excretion : Liver is the main site for elimination of cholesterol, bile pigments (bilirubin & biliverdin), inactivated products of steroid hormones, some vitamins and many drugs. Bile carries these materials to the intestine from where they are excreted with the faeces.

ARTIFICIAL KIDNEY OR HAEMODIALYSIS Kidney dialysis also known as haemodialysis or renal dialysis, is a medical treatment used to remove nitrogenous waste materials from the blood of patients lacking kidney function or kidney failure, due to infections, injury or restricted blood flow to kidneys. In this procedure, the blood is circulated through a machine known as artificial kidney or dialyser that removes wastes and excess fluid from the bloodstream. The blood from an artery is pumped through a dialyser or artificial kidney, where it flows through a semipermeable membrane which are made up of cellophane tubes. The cellophane tubes remain suspended in a tank filled with dialysing fluid which has same osmotic pressure as blood and has the same composition as that of blood plasma but it lacks nitrogenous wastes. When the blood of the patient is passed through the cellophane tubes, the dialysis fluid passing on the other side of the membrane removes unwanted elements in the blood by diffusion. The blood is then returned to the body through a vein. Main difference of kidney & dialysis is that there is no reabsorption in dialysis. In kidney, initial filtrate is about 180L daily but actual excretion is only a litre or two a day.

EXCRETION : The process of removal of toxic waste products from the body of an organism is known as excretion.