The organisms which depend on other living organisms for their food are called parasites. Example: Cuscuta, tapeworm, liver fluke etc. There are two types of parasites: 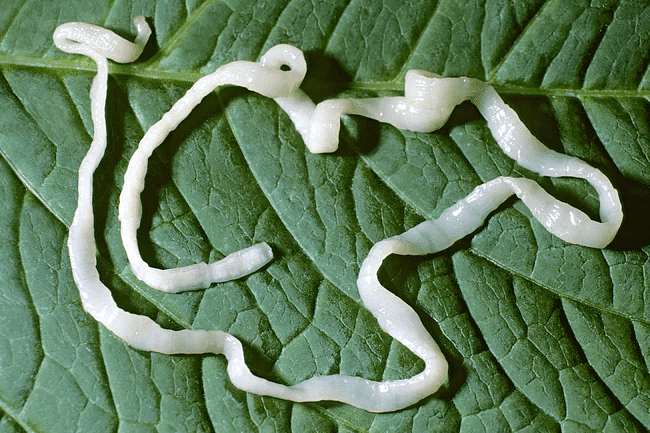 The parasites which depend for both food and shelter on the host are called total parasites. For example, liver fluke, tapeworm.

Those parasites which depend on the host only for food are called partial parasites. For example, mosquito, lice etc.

Q 2. What is Symbiosis? What is a symbiotic relationship?

It is the type of nutrition in which two different kinds of organisms depend on each other for their nutrition. In this, both the organisms are benefited from each other Example: Lichen. In this one algae and one fungus live together and remain in a symbiotic relationship.

Symbiotic Relationship: Some organisms live together and share shelter and nutrients. This type of relationship is called a symbiotic relationship.

Q 3. What are stomata? Explain their function.

Stomata are tiny pores on the underside of the leaf surface that are surrounded by guard cells. Their functions are to exchange gases by diffusion for photosynthesis and respiration and to cause transpiration by evaporation of water from the leaf surface. 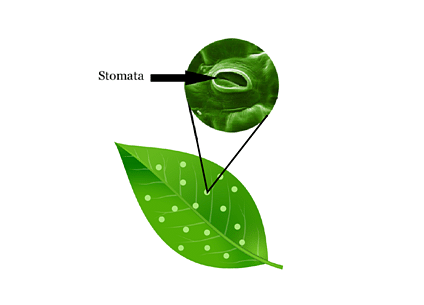 Q.4. How is sunlight used by the plant for photosynthesis? 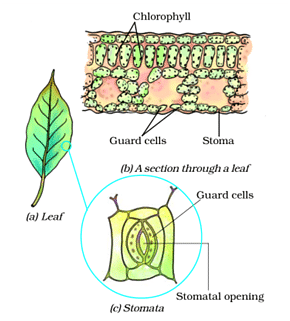 Q 6. How can we demonstrate that chlorophyll is necessary for photosynthesis? 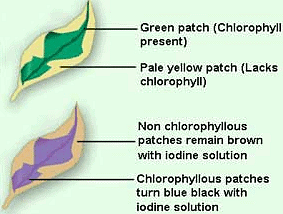 Q 7. How do plants obtain nutrients other than carbohydrates?

Plants synthesise carbohydrates using energy from sunlight to convert carbon dioxide and water to starch. The other nutrients are however obtained directly from the soil. Nitrogen is absorbed as soluble nitrogen compounds from the soil. The nitrogen compounds are present in the soil due to the action of nitrogen-fixing bacteria like Rhizobium that live in symbiotic association with roots of leguminous plants. Nitrogen compounds can be replenished by the addition of fertilizers and manure to the soil. Some plants like the pitcher plant and Venus flytrap fulfil their nitrogen requirements by insectivory. In this case, the insects are trapped and digested by plant parts and the nutrients are released into the plant body.

(i) All organisms take food and utilize it to get energy for growth and the maintenance of their bodies.(ii) Green plants synthesize their food themselves by the process of photosynthesis, they are called autotrophs.(iii) Solar energy is stored by the leaves with the help of chlorophyll.(iv) Fungi/saprotroph derive nutrition from dead, decaying matter.(v) Plants like Cuscuta take food from the Host plant.(vi) All animals are categorized as Heterotrophs.(vii) Oxygen is produced and carbon dioxide is utilized during photosynthesis.

Q 9. What is the mode of nutrition in fungi?

The mode of nutrition in fungi is heterotrophic. They cannot synthesize their own food and are dependent on other ‘organisms’ for their carbon source. They perform extracellular digestion by releasing enzymes into their environment and obtain organic and inorganic nutrients through absorption.

There are three main ways of obtaining nutrition:  (i) Saprotrophic: Decomposition of ‘dead organic matter’.  (ii) Parasitic: Feeding from a living host.(iii) Mutualism: Living in a mutually beneficial interaction with another organism. (Example: lichen is a mutualism between fungi and algae).

(i) Food is essential for all living beings.(ii) Leaves are the food factories of plant.  (iii) Water comes into leaves through stomata in the form of vapours.  (iv) Plants utilize the carbon dioxide dissolved in the water absorbed by the roots for photosynthesis.  (v) The sun is the ultimate source of energy for all living organisms.  (vi) Algae are saprotrophs.(vii) Cuscuta is a parasite. (viii) Saprotrophs take their food in solution form from dead and decaying matter. (ix) Insectivorous plants are partial Heterotrophs. (x) Plants take atmospheric nitrogen stomata and utilize a nutrient. (xi) Pitcher plant is an insectivorous plant. (xii) Many fungi are saprotroph. (xiii) ‘Leaves’ of a plant is called its food factory. (xiv) Insectivorous plants eat insects to fulfill their needs of energy.

(i) Food is essential for all living beings. - True(ii) Leaves are the food factories of plant.- False(iii) Water comes into leaves through stomata in the form of vapours.- False(iv) Plants utilize the carbon dioxide dissolved in the water absorbed by the roots for photosynthesis.- False(v) The sun is the ultimate source of energy for all living organisms. - True(vi) Algae are saprotrophs. - False (vii) Cascuta is a parasite.  - True(viii) Saprotrophs take their food in solution form from dead and decaying matter.  - True(ix) Insectivorous plants are partial Heterotrophs.  - True(x) Plants take atmospheric nitrogen stomata and utilize a nutrient. - False(xi) Pitcher plant is an insectivorous plant. - False(xii) Many fungi are saprotroph. - True(xiii) ‘Leaves’ of a plant is called its food factory. - True(xiv) Insectivorous plants eat insects to fulfil their needs of energy. - False