The document Indian Coastal Plains Notes - UPSC is a part of UPSC category.
All you need of UPSC at this link: UPSC

[Indented coastlines of Europe provide good natural harbours whereas African and Indian coastlines are not indented]. 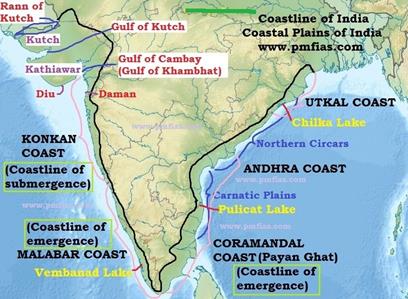 Regional Names of The East Coast of India

Regional Names of The West Coast of India

Already explained in Marine Landforms. I am discussing here for continuity.

Coastlines of Emergence and Submergence

The east coast of India, especially its south-eastern part (Tamil Nadu coast), appears to be a coast of emergence.

Significance of the Coastal Plains

The document Indian Coastal Plains Notes - UPSC is a part of UPSC category.
All you need of UPSC at this link: UPSC