The document Inductive Circuits IIT JAM Notes | EduRev is a part of the IIT JAM Course Electricity & Magnetism.
All you need of IIT JAM at this link: IIT JAM The inductance of a coil is 1H when a change of 1 A/s induces IV across the coil.

The self-induced voltage vL from) is

When the current in a conductor or coil changes, the varying flux can cut across any other conductor or coil located nearby, thus inducing voltages in both. A varying current in L1, therefore, induces voltages across L1 and across L2 (as shown in figure below). When the induced voltage vL2 produces current in L2 , its varying magnetic field induces voltage in L1 . Hence, the two coils L1 and L2 have mutual inductance because current change in one coil can induce voltage in the other. The unit of mutual inductance is the henry, and the symbol is LM . Two coils have LM of 1H when a current change of 1 A/s in one coil induces 1 V in the other coil. 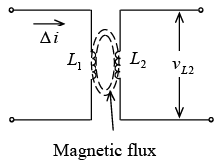 Mutual inductance Between L1 and L2

The schematic symbol for two coils with mutual inductance is shown in figure below. In a circuit containing only inductance (as shown in figure below, Ohm’s law can be used to find current and voltage by substituting X L for R.

Circuit with only XL

whereIL = current through the inductance, A L

VL = voltage across the inductance, V

➤ Inductors in Series or ParallelIf inductors are spaced sufficiently far apart so that they do not interact electromagnetically with each other; their values can be combined just like resistors when connected together. If a number of inductors are connected in series (as shown in figure below), the total inductance LT is the sum of the individual inductances, orSeries:  LT = L1 + L2 + L3 +... + Ln

Inductances in series without mutual coupling If two series-connected coils are spaced close together so that their magnetic field lines interlink, their mutual inductance will have an effect on the circuit. In that case the total inductance is LT = L1 + L2 ± 2LMwhere LM is the mutual inductance between the coils. The plus (+) sign is used if the coils are arranged in series-aiding form, while the minus (-) sign is used if the coils are connected in series-opposing form. Series aiding means that the common current produces the same direction of magnetic field for the two coils. The series-opposing connection results in opposite fields.Three different arrangements for coils L1 and L2 are shown both pictorially and schematically as shown in figure below. In figure a coils are spaced too far apart to interact electromagnetically. There is no mutual inductance, so LM is zero. The total inductance is LT = L1 + L2. In figure b, the coils are spaced close together and have windings in the same direction, as indicated by the dots. The coils are series-aiding, so

The large dots above the coil (figure b and c) are used to indicate the polarity of the windings without having to show the actual physical construction. Coils with dots at the same end (figure b) have the same polarity or same direction of winding. When current enters the dotted ends for L1 and L2 , their fields are aiding and LM has the same sense as L.If inductors are spaced sufficiently far apart so that their mutual inductance is negligible ( LM = 0), the rules for combining inductors in parallel are the same as for resistors. If a number of inductors are connected in parallel (as shown in figure below), their total inductance LT is

Inductances in parallel without mutual coupling

The total inductance of two coils connected in parallel is

All inductances must be given as the same units. The shortcuts for calculating parallel R can be used with parallel L. For example, if two 8-mH inductors are in parallel, the total inductance is  LT = L / n = 8 / 2 = 4 mH.