In water management and conservation studies, accurate information regarding the rate at which different soils will take water under different field conditions is required. The rate of entry of water into soil and the cumulative infiltration varies widely across different soil types and also within a single soil type, depending upon soil water content and management practices.Why Infiltration Rate Decreases with Time?

(i) The decrease in infiltration rate results from the decrease in the matric suction gradient (constituting one of the forces drawing water into the soil) which occurs as infiltration proceeds. If the surface of an initially dry soil is suddenly saturated, the matric gradient acting in the surface layer is at first very steep. As the wetted zone deepens, however, this gradient is reduced. Furthermore, as the thickness of the wetted soil increasesthe matric suction gradient eventually tends to become vanishingly small. Finally, infiltration rate reaches steady state condition. (ii) The decrease of infiltration rate from an initially high rate can in some cases result from gradual deterioration of soil structure, and consequent partial sealing of the profile by the formation of a dense surface crust or form the detachment and migration of pore-blocking particles or swelling of clay or air entrapment.22.2 Infiltration Equations

and infiltration rate is given by,

I = infiltration rate, cm/min, and

Example 22.1: A double ring infiltrometer test was conducted prior to an irrigation event and data recorded are given Table 21.1. Determine the parameters of the Kostiakov infiltration Equation (22.1).

Take the log of time, t and as well as accumulated infiltration, Z. The log values are reported in Table 22.1. These log-log values are plotted and simple linear regression was performed, which resulted the following equation:

Fig. 22.2 shows the comparison between the observed and predicted cumulative infiltration. To overcome the restrictions of original Kostikov infiltration equation, it was modified to include steady state infiltration term. The Modified Kostiakov Equation is given by

Infiltration rates are measured in a number of different ways. Out of several methods three which are commonly used are:

(i) The use of double ring or cylinder infiltrometer (Fig 22.3)

(ii) Measurement of subsidence of free water in a large  basin Fig.22.4. Rate of infiltration as an irrigation proceeds andthe steady rate of 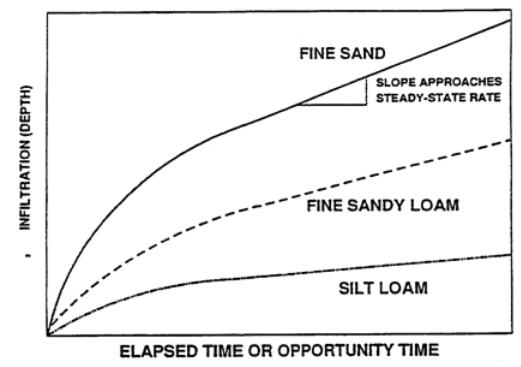