Geography of North East:Northeast India is the eastern-most region of India. It is connected to East India via a narrow corridor (Siliguri corridor) squeezed between independent nations of Bhutan and Bangladesh.?It comprises the contiguous Seven Sister States (Arunachal Pradesh, Assam, Manipur, Meghalaya, Mizoram, Nagaland, and Tripura), plus the Himalayan state of Sikkim. 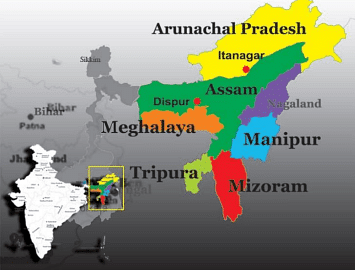 Strategic Importance of North East: Northeast India has an extraordinarily important international strategic dimension and is a vital part of the nation’s defence architecture. Its importance is enumerated below:

International Border:These states share their borders with other countries like Bangladesh, Bhutan, Myanmar and China. It makes up close to 40% of India’s land borders with its neighbours.(i) Bridge to South East Asia: The region is at the crossroads of India and Southeast Asia. It is a bridgehead between India and the vibrant economies of Southeast Asia, including southern China.(ii) Economic Significance: North East is endowed with huge natural resource (oil, gas, coal, hydro, fertile land, etc) which can be harnessed for nation development.

Overview of conflict in North East:

Conflicts in the region can be broadly grouped under the following categories: 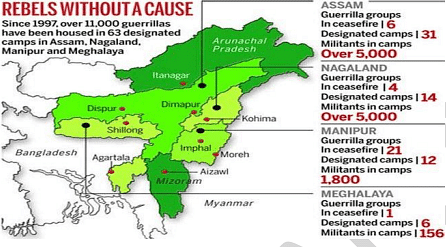 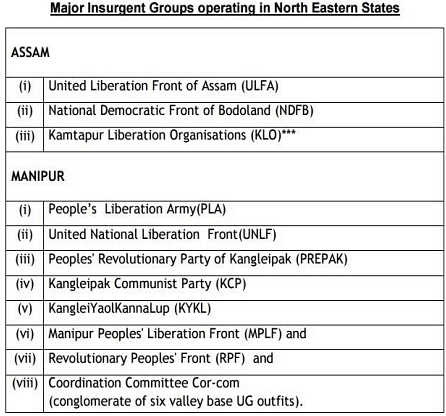 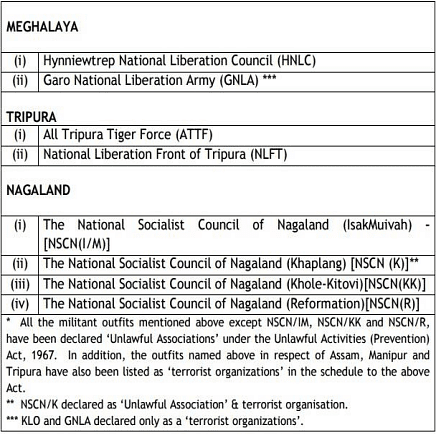 Post Telangana,revival of statehood movements by four ethnic groups — the Bodos, the Karbis, the Dimasas and the Koch-Rajbangshis

General reasons behind their demand of separate statehood 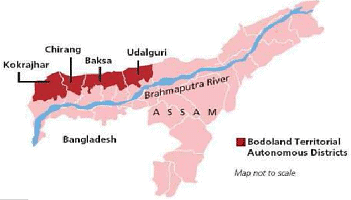 National Democratic Front of BodolandNDFB(Songjit faction) had turned up the fire in Assam in the year 2014, December by attacking districts of Sonitpur and Kokrajhar, killing nearly 78 and leaving many seriously injured. It appears that this carnage started in retaliation to the death of three NDFB (S) cadres during a counter-insurgency operation conducted by the Mahar Regiment on December 21 against the outfit’s camp in the Chirang District along the Assam-Bhutan border.Causes of these recurring violence in the area:

The situation has been further compounded by the failure of the Bodo Territorial Council (BTC) to mitigate the fears of the Bodos.

The divisive politics of the members of the BTC have also added to the insecurity.

The final cause of the recurring violence is the existence of armed groups like the NDFB-S, the Birsa Commando Force (BCF) representing the Santhals, etc., which have the capability to challenge the authority of the state administration.

The Assam-Nagaland border is disputed since Nagaland achieved statehood in 1963. The disputed land is claimed by private individuals and communities on both sides of the official border based on historical rights in the absence of bona fide documents. In spite of the Supreme Court’s intervention, the dispute remains unresolved with an interim agreement between Assam and Nagaland to place the disputed border areas under the control of a neutral Central Police force. 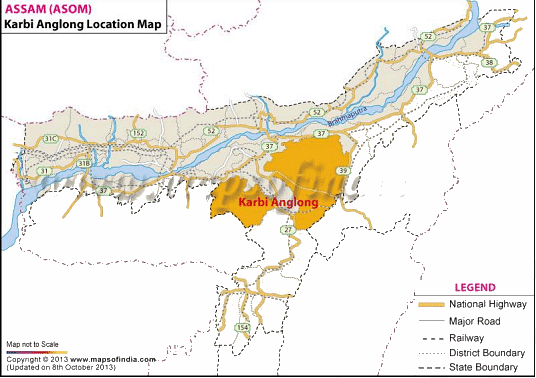 Government has created The Dima Hasao Autonomous Council (DHAC) in response to the demands. 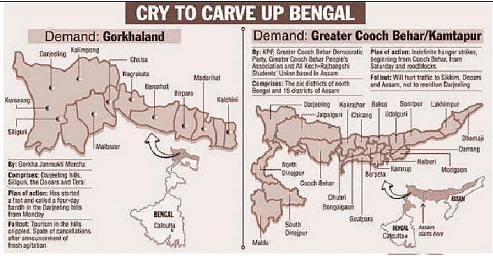 Rajbanshis-Gorkha Rajbanshis-BodoInsurgency: Kamtapur liberation OrganisationThe KLO is contrastingly clear in its cessationist demand and is campaigning for restoration of the so-called past independence of a notional Koch Kamta kingdom, which existed during the 12th to the 15th century under the control of the Khen dynasty, with capital near Moynaguri in present Alipurduar sub-division of Jalpaiguri district. The KLO`s activities encompass the six districts of north West Bengal and Kokrajhar, Bongaigaon, Dhubri and Goalpara districts of west Assam.

In short, Manipur continues to be an active arena for a multiplicity of violent conflicts. Further lack of industrialization and economic development has not helped either.

Recent Development:June 4, 2015 Incident:18 Indian Army jawans were killed and several others were injured when suspected militants ambushed their convoy in Manipur's Chandel district. 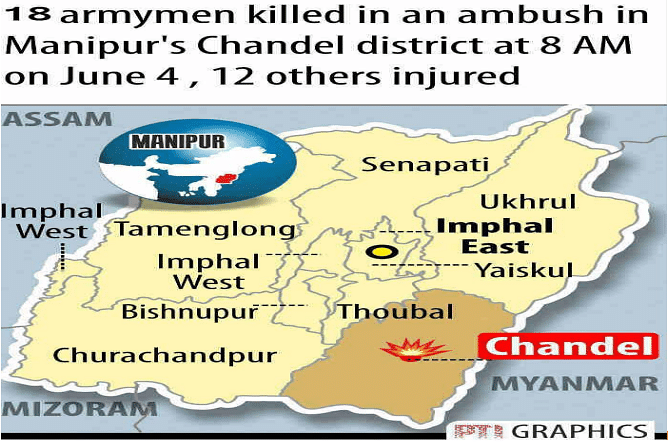 n response to the killing of 18 of its troops by militants in Manipur, the Indian Army in one of its biggest covert missions sent troops into Myanmar to strike at two camps and, according to official estimates, killed over 20 suspected militants. 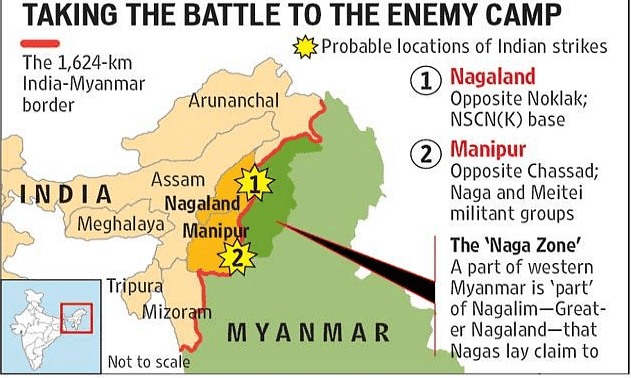 Inner Line Permit controversy in ManipurManipur witnessed a series of protests starting in July 2015, following demands for the implementation of the Inner Line Permit (ILP) system in the State. The protesters have demanded that the government introduce the ILP bill in the State Assembly. If the bill is passed and enacted into law, it will require outsiders to obtain a special pass or permit to enter the State. The system is in force in the neighbouring States of Nagaland and Mizoram and also in Arunachal Pradesh.

What is the Inner Line Permit?

The history of ILP in ManipurThe ILP in Manipur region remained in force until 1950, when it was revoked by the then Commissioner of Assam, whose jurisdiction also covered Manipur. Since Manipur, which attained Statehood in 1972, is not officially a tribal State, there are constitutional challenges to implementing the ILP system.

Who is protesting?Among the three major communities of Manipur — Meitei, Kuki, Naga — the ILP system has been demanded only by the Meiteis. The Kuki population is wary of the motives of the ILP campaign. The apprehension has recently been heightened by the fact that some within the Meitei community have called the Kukis ‘foreigners’. Though the Kukis are an indigenous group in Manipur, there are some who fear that the Meiteis could use the ILP to advance their stand of Kukis being foreigners. This seems to be an important reason why many within the Kuki community do not support the ILP or the Meiteis’ demand for tribal status.

Government Response:After few months of protests of Meitei for Inner Line Permit system to prevent "outsiders" from buying land or settling in the state, the state assembly passed three bills to give more rights to indigenous groups. This was followed by counter protests by the Kukis and Nagas to withdraw the bills resulting in violence and deaths. The tribal groups claim that the new bills, would allow Meiteis to buy land in the hill districts of Manipur where the Nagas and Kukis live. Further they argue that these bills were passed without consulting them. This has led to a tense situation till now.

Concerns over Naga Accord:NSCN (IM) in its recent peace accord with has given up its demand for Greater Nagaland providing much relief to the Manipuris. But the Khaplan faction still continues to resort to violence and was involved in the attack on the Indian Army along with ULFA and Bodo groups in Manipur in June killing 20 jawans. This was followed by India’s hot pursuit in the Myanmar territory killing about 50 terrorists.

Possible Solution:One possible amicable solution for the government is to implement the Sixth Schedule in the hill areas. Under such a political arrangement, the Kukis and Nagas would enjoy autonomy in their respective areas but remain within the State of Manipur.