The document Intermolecular Forces Class 11 Notes | EduRev is a part of the Class 11 Course Chemistry Class 11.
All you need of Class 11 at this link: Class 11

Intermolecular forcesAtoms and molecules constitute most of the matter that is around us. Every molecule or an atom exerts a force of attraction or repulsion on the other constituents. This force is known as the intermolecular force. 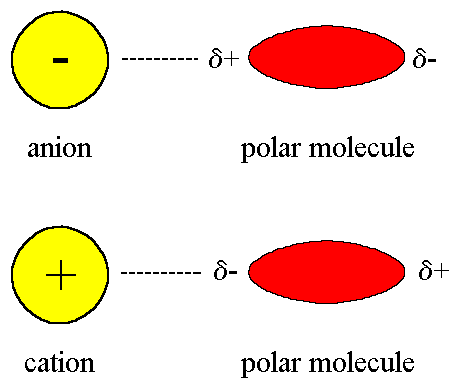 This is a simplified diagram to highlight the regions of positive and negative charge. When sodium chloride dissolves in water it can more accurately be shown as:

Fig: Region of positive and negative charge when NaCl is dissolved in water2. Ion-induced-dipole forcesSimilar to ion-dipole forces these forces exist between ions and non-polar molecules. The ion induces a dipole in the non-polar molecule leading to a weak, short lived force which holds the compounds together.These forces are found in haemoglobin (the molecule that carries oxygen around your body). Haemoglobin has Fe2+ ions. Oxygen (O2) is attracted to these ions by ion-induced dipole forces.3. Dipole-dipole forces When one dipole molecule comes into contact with another dipole molecule, the positive pole of the one molecule will be attracted to the negative pole of the other, and the molecules will be held together in this way. Examples of materials/substances that are held together by dipole-dipole forces are HCl, SO2 and CH3Cl.

One special case of this is hydrogen bonding. 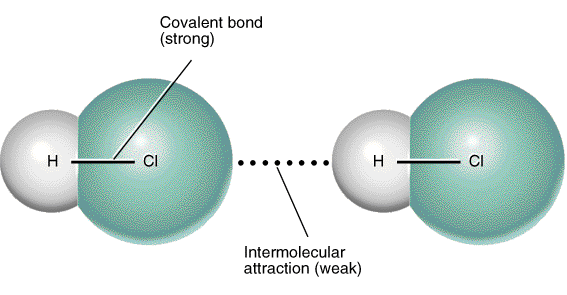 We know that while carbon dioxide is a non-polar molecule, we can still freeze it (and we can also freeze all other non-polar substances). This tells us that there must be some kind of attractive force in these kinds of molecules (molecules can only be solids or liquids if there are attractive forces pulling them together). This force is known as an induced dipole force.In non-polar molecules the electronic charge is usually evenly distributed but it is possible that at a particular moment in time, the electrons might not be evenly distributed (remember that the electrons are always moving in their orbitals). The molecule will have a temporary dipole.

When the noble gases condense, the intermolecular forces that hold the liquid together are induced dipole forces.

5. Dipole-induced-dipole forces This type of force occurs when a molecule with a dipole induces a dipole in a non-polar molecule. It is similar to an ion-induced dipole force. An example of this type of force is chloroform (CHCl3) in carbon tetrachloride (CCl4).The following image shows the types of intermolecular forces and the kinds of compounds that lead to those forces. Do not confuse hydrogen bonds with actual chemical bonds. Hydrogen bonding is an example of a case where a scientist named something believing it to be one thing when in fact it was another. In this case the strength of the hydrogen bonds misled scientists into thinking this was actually a chemical bond, when it is really just an intermolecular force. 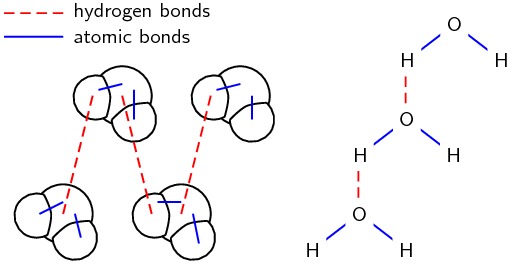