FunctionsA function is a relation that maps each element x of a set A with one and only one element y of another set B. In other words, it is a relation between a set of inputs and a set of outputs in which each input is related with a unique output. A function is a rule that relates an input to exactly one output.

It is a special type of relation. A relation f from a set A to a set B is said to be a function if every element of set A has one and only one image in set B and no two distinct elements of B have the same mapped first element.  A and B are the non-empty sets. The whole set A is the domain and the whole set B is codomain.

RepresentationA function f: X →Y is represented as f(x) = y, where, (x, y) ∈ f and x ∈ X and y ∈ Y.For any function f, the notation f(x) is read as “f of x” and represents the value of y when x is replaced by the number or expression inside the parenthesis. The element y is the image of x under f and x is the pre-image of y under f.

Solved Example for You

Problem: Which of the following is a function? 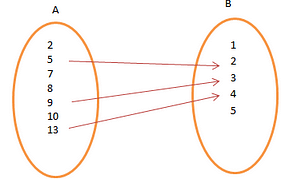 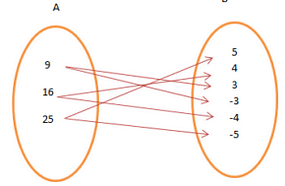 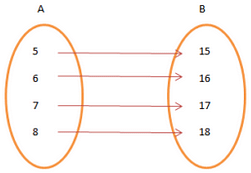 Solution: Figure 3 is an example of function since every element of A is mapped to a unique element of B and no two distinct elements of B have the same pre-image in A.