The procedure is the same whether it is applied to beams or frames. It may be summarized as follows:

Example 14.1A continuous ABC beam is carrying uniformly distributed load of 2 kN/m in addition to a concentrated load of 20 kN as shown in Fig.14.5a. Draw bending moment and shear force diagrams. Assume EI to be constant.

(a). Degrees of freedomIt is observed that the continuous beam is kinematically indeterminate to first degree as only one joint rotation θB is unknown. The deflected shape /elastic curve of the beam is drawn in Fig.14.5b in order to identify degrees of freedom. By fixing the support or restraining the support B against rotation, the fixed-fixed beams area obtained as shown in Fig.14.5c.

are calculated referring to the Fig. 14. and following the sign conventions that counterclockwise moments are positive.

(d) Equilibrium equationsIn the above four equations (2-5), the member end moments are expressed in terms of unknown rotation θB . Now, the required equation to solve for the rotation θB is the moment equilibrium equation at support B. The free body diagram of support B along with the support moments acting on it is shown in Fig. 14.5d. For, moment equilibrium at supportB, one must have,

Substituting the values of MBA and MBC in the above equilibrium equation,

The shear force and bending moment diagrams are shown in Fig. 14.5f. 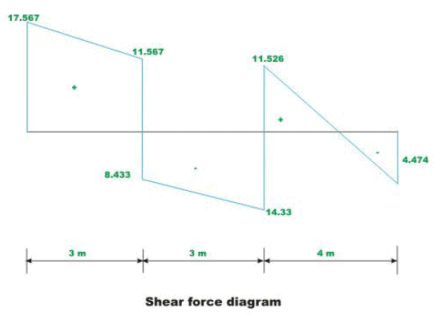 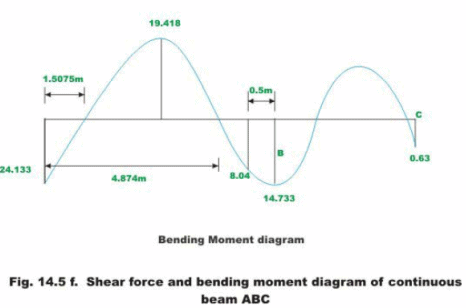 Draw shear force and bending moment diagram for the continuous beam loaded as shown in Fig.14.6a.The relative stiffness of each span of the beam is also shown in the figure.

For the cantilever beam portion CD, no slope-deflection equation need to be written as there is no internal moment at end D. First, fixing the supports at B and C, calculate the fixed end moments for span AB and BC. Thus,

In the next step write slope-deflection equation. There are two equations for each span of the continuous beam.

Substituting the values of MCB and MCD in the above equations for MAB ,MBA ,MBC and MCB we get,

Substituting θB ,θC in the slope-deflection equations, we get

The shear force and bending moment diagrams are shown in Fig. 14.6d. 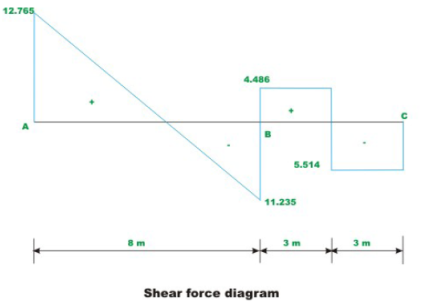 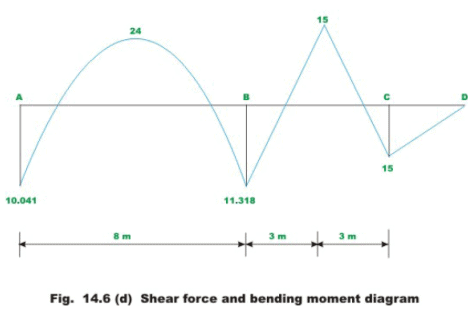 For ease of calculations, fixed end forces for various load cases are given in Fig. 14.7.