Automata theory (also known as Theory Of Computation) is a theoretical branch of Computer Science and Mathematics, which mainly deals with the logic of computation with respect to simple machines, referred to as automata. 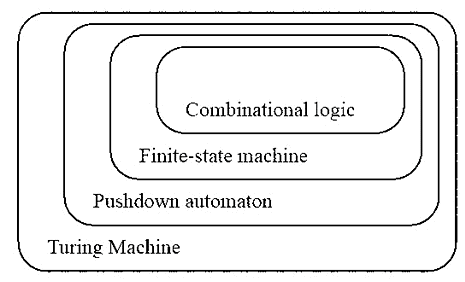 Some more points regarding the theory of computation:

Question for Introduction: Theory of Computation
Try yourself:Automata word has originated from which word?
Explanation

The word automata has originated from the Greek word 'automaton'. The word automaton in Greek means 'self-moving' or self, one's own, by oneself, of oneself.

Our view of languages is that a language is a set of strings. In turn, a string is a finite sequence of letters from some alphabet. These concepts are defined rigorously as follows.

1. Symbol: Symbol is the smallest building block, which can be any alphabet, letter or any picture.

2. Alphabets (Σ): Alphabets are set of symbols, which are always finite.

3. String: String is a finite sequence of symbols from some alphabet. String is generally denoted as w and length of a string is denoted as |w|.Empty string is the string with zero occurrence of symbols, represented as ε.Number of Strings (of length 2) that can be generated over the alphabet {a, b} -

Capital letters A, B, C, L, etc. with or without subscripts are normally used to denote languages.