The operating system as User Interface: 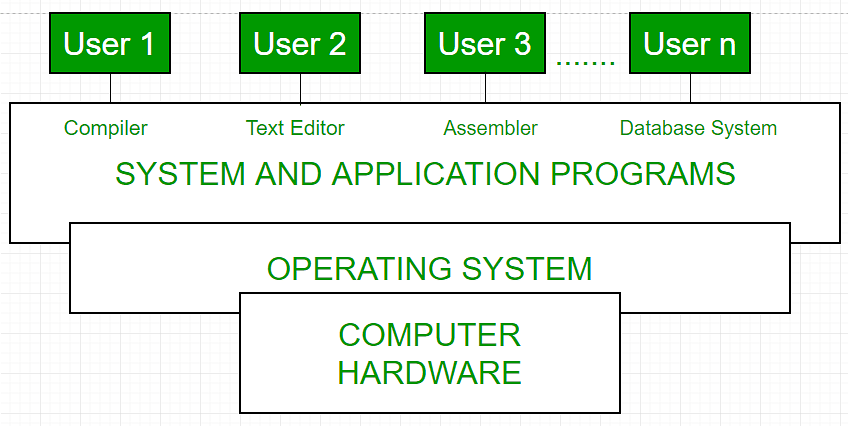 Conceptual view of a computer system

Every computer must have an operating system to run other programs. The operating system coordinates the use of the hardware among the various system programs and application programs for various users. It simply provides an environment within which other programs can do useful work.The operating system is a set of special programs that run on a computer system that allows it to work properly. It performs basic tasks such as recognizing input from the keyboard, keeping track of files and directories on the disk, sending output to the display screen, and controlling peripheral devices.OS is designed to serve two basic purposes:

The Operating system must support the following tasks. The task are:

I/O System ManagementThe module that keeps track of the status of devices is called the I/O traffic controller.Each I/O device has a device handler that resides in a separate process associated with that device.The I/O subsystem consists of

AssemblerThe input to an assembler is an assembly language program. The output is an object program plus information that enables the loader to prepare the object program for execution. At one time, the computer programmer had at his disposal a basic machine that interpreted, through hardware, certain fundamental instructions. He would program this computer by writing a series of ones and Zeros (Machine language), place them into the memory of the machine.

Compiler The High-level languages- examples are FORTRAN, COBOL, ALGOL, and PL/I are processed by compilers and interpreters. A compiler is a program that accepts a source program in a “high-level language “and produces a corresponding object program. An interpreter is a program that appears to execute a source program as if it was machine language. The same name (FORTRAN, COBOL, etc.) is often used to designate both a compiler and its associated language.

LoaderA Loader is a routine that loads an object program and prepares it for execution. There are various loading schemes: absolute, relocating, and direct-linking. In general, the loader must load, relocate and link the object program. The loader is a program that places programs into memory and prepares them for execution. In a simple loading scheme, the assembler outputs the machine language translation of a program on a secondary device and a loader places it in the core. The loader places into memory the machine language version of the user’s program and transfers control to it. Since the loader program is much smaller than the assembler, those make more core available to the user’s program.

Examples of Operating System are

After an operating system is generated, it must be available for the use by the hardware. But how the hardware know where the kernel is, or how to load that kernel? The procedure of starting a computer by loading the kernel is known as Booting the system. Hence it needs a special program, stored in ROM to do this job known as the Bootstrap loader. Example: BIOS (boot input output system). A modern PC BIOS (Basic Input/Output System) supports booting from various devices.Typically, the BIOS will allow the user to configure a boot order. If the boot order is set to: 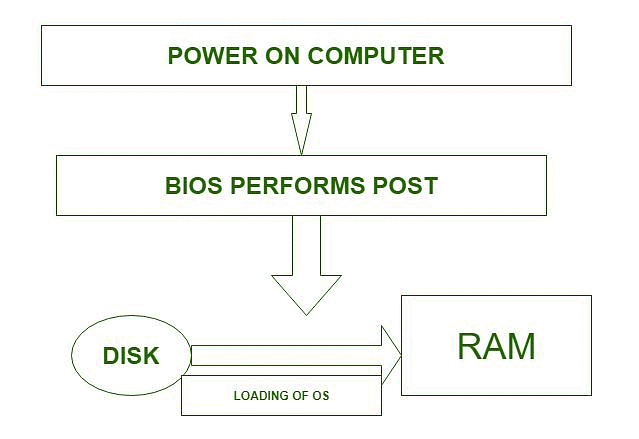