The document Introduction to 3D Geometry Mathematics Notes | EduRev is a part of the Mathematics Course Additional Topics for IIT JAM Mathematics.
All you need of Mathematics at this link: Mathematics

Understanding the 3D GeometryWe can understand any 3D space in terms of 3 coordinates- x, y, and z. 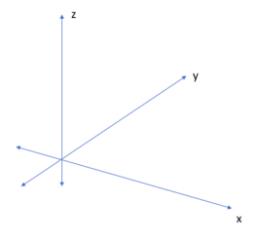 VectorsVectors are the Fundamental Unit of 3D Operations. In physics, Vectors are quantities having both magnitude and distance. In mathematics, especially in 3D geometry, a vector is a directed entity that connects 2 or more points. A position vector is a special type of vector that connects the origin O(0,0,0) to the point, as shown below: 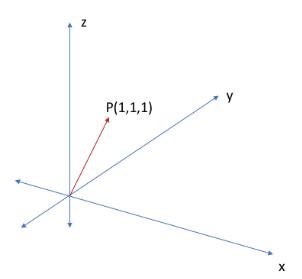 Example: Calculate the magnitude of a vector whose tail is given by (1,2,3), and whose head is given by (4,5,6)Solution: In the given example, we have: 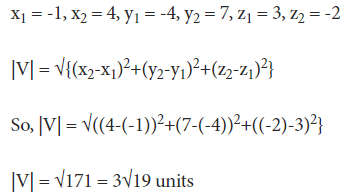 A unit vector is any vector that has a magnitude of 1.

Components of a VectorIf we consider a Cartesian coordinate system, any vector can be defined in terms of 3 components. We can define the notation of any vector as:

are the unit vectors along the x, y and z-axes respectively, and |x|, |y|, and |z| denote the length of the components of the vector along these axes respectively. The magnitude of a vector V, is

Example: Calculate the x, y, and z components of the vector

More Solved Examples for YouQuestion: The point (0, -2, 5) lies on the:X-axisY-axisXY-planeYZ-planeSolution: Option D. Given Point is (0, -2, 5). The X co-ordinate of the point is 0. Thus, the point lies in the YZ-plane.