The concept of letter series is related to 26 letters of the alphabet series. 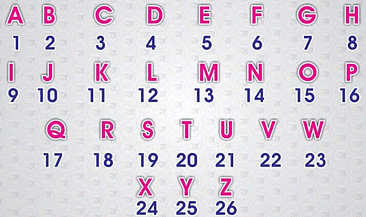 (ii) Position number of letters in English alphabets in reverse

The following two concepts in order to recall the position of alphabets easily.1. Concept of EJOTY

Concept of EJOTY represents the position of the alphabets counting from the left at an interval of 5 letters:

Each letter in the term EJOTY represents the position which is multiple of 5.

Just like the concept EJOTY, the concept of VQLGB represents the position of the alphabets counting from the right at an interval of 5 letters:

In the next tutorials, we will talk about the different categories of questions that can be asked on letter series.