Fig. 32.1 Variation of horizontal components of velocity for laminar and turbulent flows at a point P 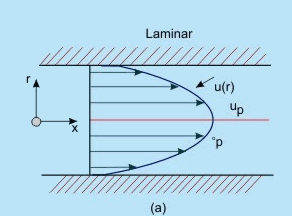 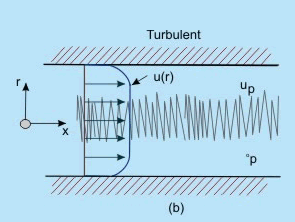 Fig. 32.2 Comparison of velocity profiles in a pipe for (a) laminar and (b) turbulent flows of layers of fluids with different velocities over one another

Turbulence can be categorised as below:

1.Homogeneous Turbulence: Turbulence has the same structure quantitatively in all parts of the flow field.

2.Isotropic Turbulence: The statistical features have no directional preference and perfect disorder persists.

3.Anisotropic Turbulence: The statistical features have directional preference and the mean velocity has a gradient.

1.Homogeneous Turbulence : The term homogeneous turbulence implies that the velocity fluctuations in the system are random but the average turbulent characteristics are independent of the position in the fluid, i.e., invariant to axis translation.

2.Isotropic Turbulence: The velocity fluctuations are independent of the axis of reference, i.e. invariant to axis rotation and reflection. Isotropic turbulence is by its definition always homogeneous. In such a situation, the gradient of the mean velocity does not exist, the mean velocity is either zero or constant throughout.- In isotropic turbulence fluctuations are independent of the direction of reference and

it is re-emphasised that even if the rms fluctuations at any point are same, their instantaneous values necessarily differ from each other at any instant.

- Turbulent flow is diffusive and dissipative . In general, turbulence brings about better mixing of a fluid and produces an additional diffusive effect. Such a diffusion is termed as "Eddy-diffusion ".( Note that this is different from molecular diffusion)- At a large Reynolds number there exists a continuous transport of energy from the free stream to the large eddies. Then, from the large eddies smaller eddies are continuously formed. Near the wall smallest eddies destroy themselves in dissipating energy, i.e., converting kinetic energy of the eddies into intermolecular energy.

- For a turbulent flow over a flat plate,

- The turbulent boundary layer continues to grow in thickness, with a small region below it called a viscous sublayer. In this sub layer, the flow is well behaved,just as the laminar boundary layer (Fig. 32.3)

- Observe that at a certain axial location, the laminar boundary layer tends to become unstable. Physically this means that the disturbances in the flow grow in amplitude at this location.

- Free stream turbulence, wall roughness and acoustic signals may be among the sources of such disturbances. Transition to turbulent flow is thus initiated with the instability in laminar flow.

- The possibility of instability in boundary layer was felt by Prandtl as early as 1912. The theoretical analysis of Tollmien and Schlichting showed that unstable waves could exist if the Reynolds number was 575.

The Reynolds number was defined as

where U∞ is the free stream velocity , δ* is the displacement thickness and v is the kinematic viscosity .

- Taylor developed an alternate theory, which assumed that the transition is caused by a momentary separation at the boundary layer associated with the free stream turbulence. In a pipe flow the initiation of turbulence is usually observed at Reynolds numbers (U∞, D/V )in the range of 2000 to 2700.

- The development starts with a laminar profile, undergoes a transition, changes over to turbulent profile and then stays turbulent thereafter (Fig. 32.4). The length of development is of the order of 25 to 40 diameters of the pipe. A statistical correlation can be applied to fluctuating velocity terms in turbulence. Turbulent motion is by definition eddying motion. Not withstanding the circulation strength of the individual eddies, a high degree of correlation exists between the velocities at two points in space, if the distance between the points is smaller than the diameter of the eddy. Conversely, if the points are so far apart that the space, in between, corresponds to many eddy diameters (Figure 32.5), little correlation can be expected.

It is conventional to work with the non-dimensional form of the correlation, such as

A value of R(r) of unity signifies a perfect correlation of the two quantities involved and their motion is in phase.Negative value of the correlation function implies that the time averages of the velocities in the two correlated points have different signs. Figure 32.6 shows typical variations of the correlation R with increasing separation r .