Solution. 281.  The total centrifugal force can be calculated by, 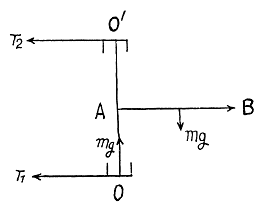 Q. 282. The middle of a uniform rod of mass m and length l is rigidly fixed to a vertical axis OO' so that the angle between the rod and the axis is equal to θ (see Fig. 1.71). The ends of the axis OO' are provided with bearings. The system rotates without friction with an angular velocity ω. Find:  (a) the magnitude and direction of the rod's angular momentum M relative to the point C, as well as its angular momentum relative to the rotation axis; (b) how much the modulus of the vector M relative to the point C increases during a half-turn; (c) the moment of external forces N acting on the axle OO' in the process of rotation

(a) The angular velocity

This can be obtained directly also,

(b) The modulus of

does not change but  the modulus of the change of

Q. 283. A top of mass m = 0.50 kg, whose axis is tilted by an angle θ = 30° to the vertical, precesses due to gravity. The moment of inertia of the top relative to its symmetry axis is equal to I = 2.0 g•m2 , the angular velocity of rotation about that axis is equal to ω = 350 rad/s, the distance from the point of rest to the centre of inertia of the top is l = 10 cm. Find: (a) the angular velocity of the top's precession; (b) the magnitude and direction of the horizontal component of the reaction force acting on the top at the point of rest

Solution. 283. Here M = I ω is along the symmetry axis. It has tw o components, the part l ω cosθ is constant and the part M⊥ - l ω sinθ presesses, then

(b) This force is the centripetal force due to precession. It acls inward and has the magnitude

the distance of the i th element from the axis. This is the force that the table will exert on the top. See the diagram in the answer sheet 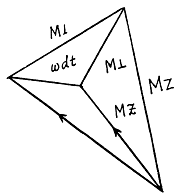 Q. 284. A gyroscope, a uniform disc of radius R = 5.0 cm at the end of a rod of length l = 10 cm (Fig. 1.73), is mounted on the floor of an elevator car going up with a constant acceleration w = 2.0 m/s2. The other end of the rod is hinged at the point O. The gyroscope precesses with an angular velocity n = 0.5 rps. Neglecting the friction and the mass of the rod, find the proper angular velocity of the disc.

The precession frequency being 2 π n,

This must equal m (g + w) l, the effective gravitational torques (g being replaced by g + w in the elevator). Thus,

Q. 285. A top of mass m = 1.0 kg and moment of inertia relative to its own axis I = 4.0 g•m2 spins with an angular velocity ω = 310 rad/s. Its point of rest is located on a block which is shifted in a horizontal direction with a constant acceleration w = 1.0 m/s2. The distance between the point of rest and the centre of inertia of the top equals l = 10 cm. Find the magnitude and direction of the angular velocity of precession ω'.

with the vertical. Then with reference to the new " vertical" we proceed as in problem 1.283. Thu

with the normal vertical.

Q. 286. A uniform sphere of mass m = 5.0 kg and radius R  = 6.0 cm rotates with an angular velocity ω = 1250 rad/s about a horizontal axle passing through its centre and fixed on the mounting base by means of bearings. The distance between the bearings equals l = 15 cm. The base is set in rotation about a vertical axis with an angular velocity ω' = 5.0 rad/s. Find the modulus and direction of the gyroscopic forces.

Solution. 286. The moment of inertia of the sphere is

and hence the value of angular momentum is

Since it precesses at speed ω' the torque required is

Q. 287. A cylindrical disc of a gyroscope of mass m = 15 kg and radius r = 5.0 cm spins with an angular velocity ω = 330 rad/s. The distance between the bearings in which the axle of the disc is mounted is equal to l = 15 cm. The axle is forced to oscillate about a horizontal axis with a period T = 1.0 s and amplitude φm, = 20°. Find the maximum value of the gyroscopic forces exerted by the axle on the bearings.

Solution. 287. The moment of inertia is

and angular momentum is

The axle oscillates about a horizontal axis making an instantaneous angle.

The maximum value of this is

When the angle between the axle and the axis is at its maximumis value, a torque

The corresponding gyroscopic force will be

Q. 288. A ship moves with velocity v = 36 km per hour along an arc of a circle of radius R = 200 m. Find the moment of the gyroscopic forces exerted on the bearings by the shaft with a flywheel whose moment of inertia relative to the rotation axis equals I = 3.8.103  kg•m2  and whose rotation velocity n = 300 rpm. The rotation axis is oriented along the length of the ship.

Q. 289. A locomotive is propelled by a turbine whose axle is parallel to the axes of wheels. The turbine's rotation direction coincides with that of wheels. The moment of inertia of the turbine rotor relative to its own axis is equal to I = 240 kg• m2 . Find the additional force exerted by the gyroscopic forces on the rails when the locomotive moves along a circle of radius R = 250 m with velocity v = 50 km per hour. The gauge is equal to l = 1.5 m. The angular velocity of the turbine equals n = 1500 rpm.

Solution. 289. As in the previous problem a couple 2πInv/R must come in play. This can be done if a force,

acts on the rails in opposite directions in addition to the centrifugal and other forces. The force on the outer rail is increased and that on the inner rail decreased. The additional force in this case has the magnitude 1.4 kN.m.