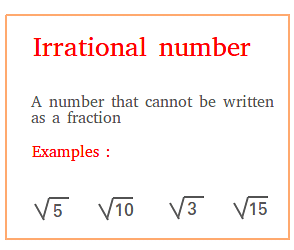 Irrational numberThe calculations based on these numbers are a bit complicated. For example, √5, √11, √21, etc., are irrational. If such numbers are used in arithmetic operations, then first we need to evaluate the values under root. These values could be sometimes recurring also. Now let us find out its definition, lists of irrational numbers, how to find them, etc., in this article.

Another case:Let us assume a case of √2. Now, how can we find if √2 is an irrational number?Suppose, √2 is a rational number. Then, by the definition of rational numbers, it can be written that,√ 2 =p/q    …….(1)Where p and q are co-prime integers and q ≠ 0 (Co-prime numbers are those numbers whose common factor is 1).Squaring both the sides of equation (1), we have2 = p2/q2⇒ p2 = 2 q 2    ………. (2)From the theorem stated above, if 2 is a prime factor of p2, then 2 is also a prime factor of p.So, p = 2 × c, where c is an integer.Substituting this value of p in equation (3), we have(2c)2 = 2 q2⇒ q2 = 2c 2 This implies that 2 is a prime factor of q2 also. Again from the theorem, it can be said that 2 is also a prime factor of q.According to the initial assumption, p and q are co-primes but the result obtained above contradicts this assumption as p and q have 2 as a common prime factor other than 1. This contradiction arose due to the incorrect assumption that √2  is rational.So, root 2 is irrational.Similarly, we can justify the statement discussed in the beginning that if p is a prime number, then √ p  is an irrational number. Similarly, it can be proved that for any prime number p,√ p is irrational.