Irrigation projects are classified in different ways, however, in Indian context it is usually classified as follows:3.2.1 Based on Cultural Command Area (CCA)

The Major and Medium Irrigation (MMI) projects are further classified into two types based on irrigation method adopted.

3.2.2 Based on the Way of Water Application

The Irrigation schemes are classified into two types based on way of water application.

3.3 Some of the Major Irrigation Projects 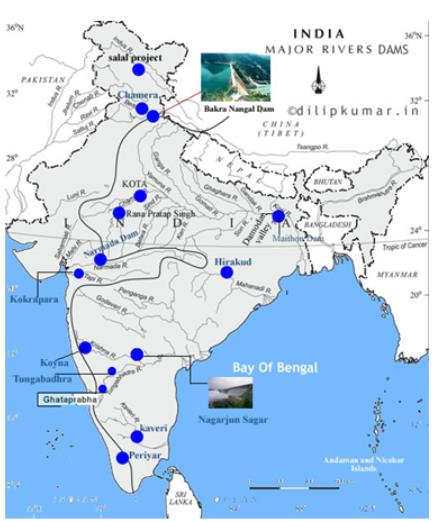 Demand for irrigation water in India is huge; however, the limits to storage and transfer of water restrict the potential for irrigation. The assessment of Ultimate Irrigation Potential (UIP) needs to be periodically reviewed to account for revision in scope, technological advancement, inter basin transfer of water, induced recharging of ground water, etc. The UIP of projects covered under the Accelerated Irrigation Benefit Program (AIBP) is of the order of 139.9 Mha. Potential Created (PC) & Potential Utilised (PU) up to end of IXth Plan are given in Table 3.2.Table 3.2. Sector wise UIP, PC and PU Till end of IXth Plan (in Mha)

3.3.2 Procedure for Setting up a MMI Project in IndiaThe state planning to start a new irrigation project shall have to prepare a report based on “Guidelines for Submission, Appraisal and Clearance of Irrigation and Multipurpose Projects” brought out by the Central Water Commission (CWC). This report has to be sent to the project appraisal organization of the CWC for the clearance with a note certifying the following:

It may be noted that similar report has to be made even for multipurpose projects having irrigation as a component. Apart from the above techno-economic studies carried out by the state design organization, the project report should be examined by the state-level project appraisal/technical advisory committee comprising representatives of irrigation, agriculture, fisheries, forests, soil conservation, ground water, revenue and finance departments and state environmental management authority. The techno-economic feasibility report should also be supplemented with “Environmental Impact Assessment Report” and “Relief and Rehabilitation Plan” because of major impact of an irrigation project on environment.The project proposal submitted to the CWC shall be circulated amongst the members of the advisory committee of the ministry of water resources for scrutiny. Once the project is found acceptable it shall be recommended for investment clearance to the planning commission and inclusion in the five year plan/annual plan.3.3 Environmental Impact of Irrigation ProjectsAll water resource projects, whether for irrigation or for hydro-electric power or for flood control or for water supply, are constructed for the well-being of human beings and have definite impact on the surrounding ecosystems and environment. If the projects are properly planned and suitably designed, the adverse impacts can be minimized. Environmental evaluation or assessment is generally done at the planning and design stages of the project. There is a need to develop a complete checklist of the impacts and an environmental evaluation system to quantify the impacts of irrigation projects.