Q.1. Two spherical stars A and B have densities ρA and ρB, respectively. A and B have the same radius, and their masses MA and MB are related by MB = 2MA. Due to an interaction process, star A loses some of its mass, so that its radius is halved, while its spherical shape is retained, and its density remains ρA. The entire mass lost by A is deposited as a thick spherical shell on B with the density of the shell being ρA. If vA and vB are the escape velocities from A and B after the interaction process, the ratio 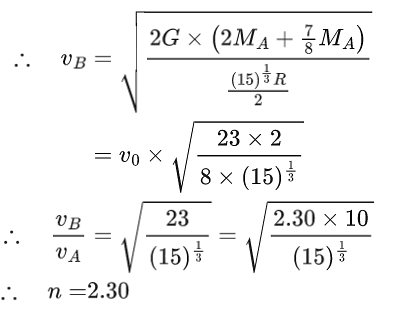 Q.5. A body of mass m is projected with velocity λve in vertically upward direction from the surface of the earth into space. It is given that ve is escape velocity and λ < 1. If air resistance is considered to be negligible, then the maximum height from the centre of earth, to which the body can go, will be : (R : radius of earth)               (JEE Main 2022)(a) 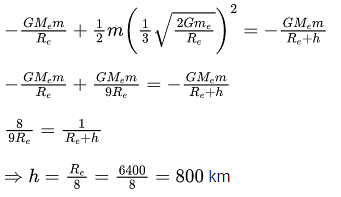 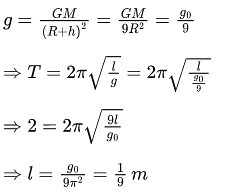 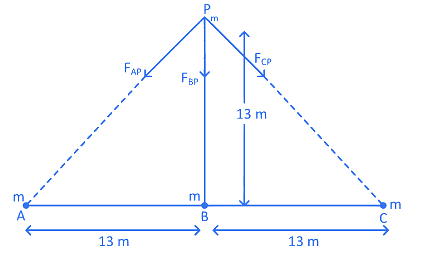 Ans. bAccording to the given information

Q.16. Given below are two statements : One is labelled as Assertion A and the other is labelled as Reason R.Assertion A: If we move from poles to equator, the direction of acceleration due to gravity of earth always points towards the center of earth without any variation in its magnitude.Reason R: At equator, the direction of acceleration due to the gravity is towards the center of earth.In the light of above statements, choose the correct answer from the options given below:           (JEE Main 2022)(a) Both A and R are true and R is the correct explanation of A.(b) Both A and R are true but R is NOT the correct explanation of A.(c) A is true but R is false.(d) A is false but R is true.

Q.19. Four spheres each of mass m from a square of side d (as shown in figure). A fifth sphere of mass M is situated at the centre of square. The total gravitational potential energy of the system is :           (JEE Main 2022) 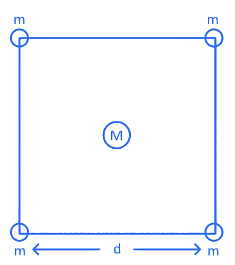 Q.21. Two planets A and B of equal mass are having their period of revolutions TA and TB such that TA = 2TB. These planets are revolving in the circular orbits of radii rA and rB respectively. Which out of the following would be the correct relationship of their orbits?           (JEE Main 2022)(a)

Let the masses are m and distance between them is l, then F  =Gm2/l2.When 1/3rd mass is transferred to the other then masses will be 4m/3 and 2m/3. so new force will be 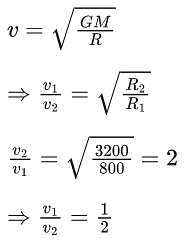 Q.29. The distance between two stars of masses 3MS and 6MS is 9R. Here R is the mean distance between the centers of the Earth and the Sun, and MS is the mass of the Sun. The two stars orbit around their common center of mass in circular orbits with period nT, where T is the period of Earth's revolution around the Sun. The value of n is __________.       ( JEE Advanced 2021)

Q.30. Two satellites revolve around a planet in coplanar circular orbits in anticlockwise direction. Their period of revolutions are 1 hour and 8 hours respectively. The radius of the orbit of nearer satellite is 2 × 103 km. The angular speed of the farther satellite as observed from the nearer satellite at the instant when both the satellites are closest is 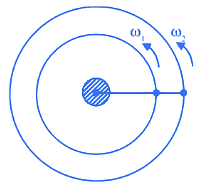 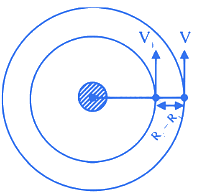 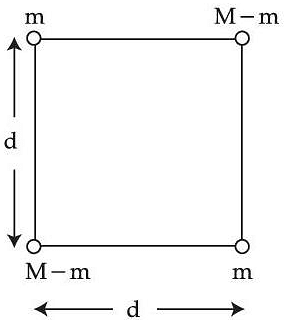 Ans. 2Energy is maximum when mass is split equally so M/m = 2

Q.32. Suppose two planets (spherical in shape) in radii R and 2R, but mass M and 9M respectively have a centre to centre separation 8 R as shown in the figure. A satellite of mass 'm' is projected from the surface of the planet of mass 'M' directly towards the centre of the second planet. The minimum speed 'v' required for the satellite to reach the surface of the second planet is 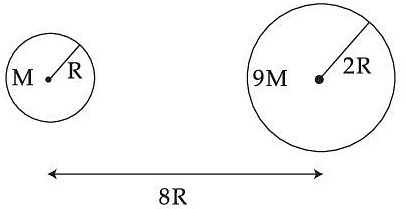 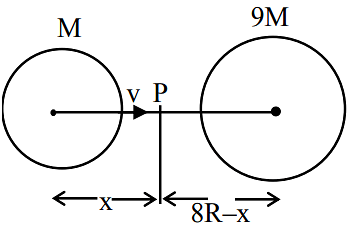 Q.34. If one wants to remove all the mass of the earth to infinity in order to break it up completely.The amount of energy that needs to be supplied will be

Ans. 3We know that binding energy of earth,

∴ Energy required to break the earth into pieces

According to question, the amount of energy that needs to be supplied is 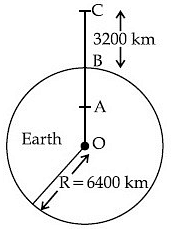 Q.36. The initial velocity vi required to project a body vertically upward from the surface of the earth to reach a height of 10R, where R is the radius of the earth, may be described in terms of escape velocity ve such that

Q.37. Four particles each of mass M, move along a circle of radius R under the action of their mutual gravitational attraction as shown in figure. The speed of each particle is :         (JEE Main 2021) 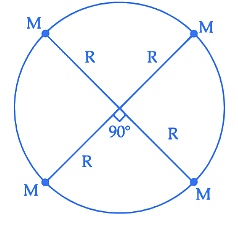 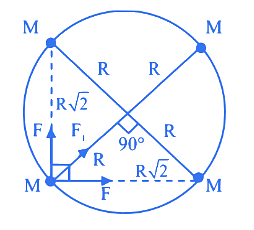 Along the centre of circle, 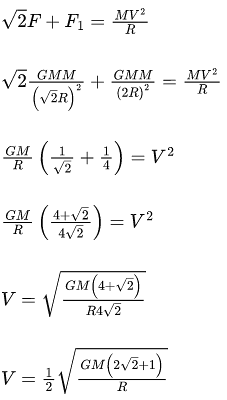 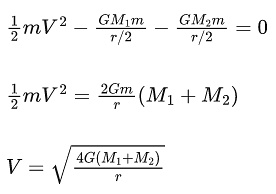 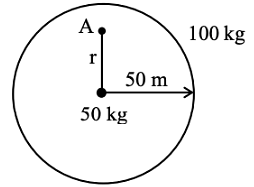 Q.43. Two identical particles of mass 1 kg each go round a circle of radius R, under the action of their mutual gravitational attraction. The angular speed of each particle is :         (JEE Main 2021)(a) 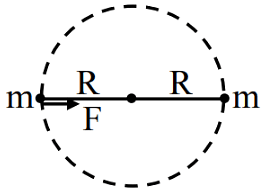 Q.44. Consider a planet in some solar system which has a mass double the mass of earth and density equal to the average density of earth. If the weight of an object on earth is W, the weight of the same object on that planet will be :         (JEE Main 2021)(a) 2W(b) W(c)

Q.45. The minimum and maximum distances of a planet revolving around the sun are x1 and x2. If the minimum speed of the planet on its trajectory is v0 then its maximum speed will be :         (JEE Main 2021)(a)

Q.48. A person whose mass is 100 kg travels from Earth to Mars in a spaceship. Neglect all other objects in sky and take acceleration due to gravity on the surface of the Earth and Mars as 10 m/s2 and 4 m/s2 respectively. Identify from the below figures, the curve that fits best for the weight of the passenger as a function of time.         (JEE Main 2021) 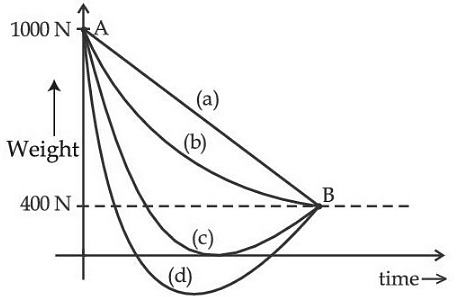 ∴ Weight at Earth, mgE = 100 × 10 = 1000 NAs the spaceship moves far away from Earth, the value of gE decreases to zero at a point where gE + gM = 0 and hence weight will also be zero.This point is called neutral point and is shown by graph (c) in the given figure.Then, gE increases 4ms−2 at Mars surface and weight becomes 400N which is also exhibited by graph (c).

Q.49. The angular momentum of a planet of mass M moving around the sun in an elliptical orbit is 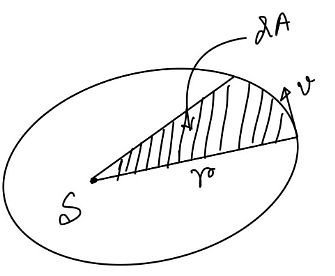 Gravitational force line passes through the sun so torque about sun always zero for the planet∴ Angular momentum about sum is constant. 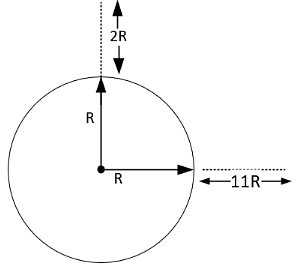 Q.55. Find the gravitational force of attraction between the ring and sphere as shown in the diagram, where the plane of the ring is perpendicular to the line joining the centres. If √8R is the distance between the centres of a ring (of mass 'm') and a sphere (mass 'M') where both have equal radius 'R'.         (JEE Main 2021) 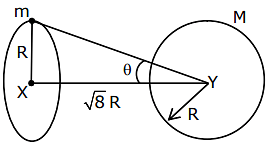 Ans. bAccording to Kepler’s second law of planetary motion, areal velocity of every planet moving around the sun should remain constant in elliptical orbit.

Q.57. Assume that a tunnel is dug along a chord of the earth, at a perpendicular distance (R/2) from the earth's centre, where 'R' is the radius of the Earth. The wall of the tunnel is frictionless. If a particle is released in this tunnel, it will execute a simple harmonic motion with a time period :         (JEE Main 2021)(a) 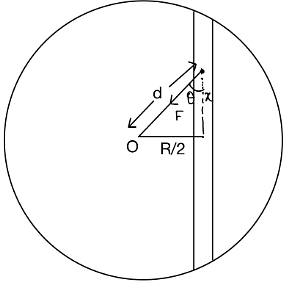 Q.58. Given below are two statements : one is labelled as Assertion A and the other is labelled as Reason R.Assertion A: The escape velocities of planet A and B are same. But A and B are of unequal mass.Reason R: The product of their mass and radius must be same. M1R1 = M2R2In the light of the above statements, choose the most appropriate answer from the options given below :         (JEE Main 2021)(a) Both A and R are correct and R is the correct explanation of A(b) Both A and R are correct but R is NOT the correct explanation of A(c) A is correct but R is not correct(d) A is not correct but R is correct 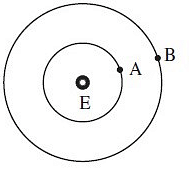 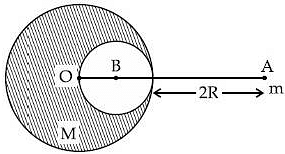 Ans. dThe given situation is shown below

The gravitational force between these two stars provide the required centripetal force for rotation in a circle about their common centre.Assuming 2 m at origin, the centre of mass of the system lies at

Hence, FG = FCwhere, FG is gravitational force between them and FC is centripetal force.

Q.64. Four identical particles of equal masses 1 kg made to move along the circumference of a circle of radius 1 m under the action of their own mutual gravitational attraction. The speed of each particle will be :         (JEE Main 2021)(a) 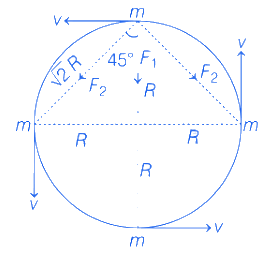 Net force on one particle,