The document Key Concepts Chapter 3 - Democracy and Diversity, Class 10, SST | EduRev Notes is a part of the Class 10 Course Social Studies (SST) Class 10.
All you need of Class 10 at this link: Class 10

1. Read this real event, which happened in 1968 during the Olympics held at Mexico city. A Case Study— Mexico Olympics2. Two African-American athletes, Tommie Smith and John Carlos, won the gold and bronze medal respectively in the 200 mt. race. For the medal ceremony, both of them wore no shoes and stood in their black socks. They were representing Black poverty, and racial discrimination against them in the USA. They also raised black-gloved clenched fists to symbolise Black Power. The athlete from Australia, Peter Norman, who won the silver medal, wore a human rights badge to declare his support to the two Americans. 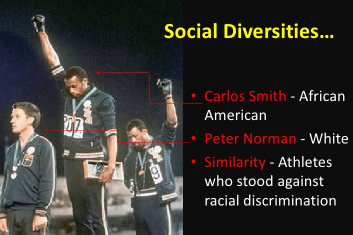 3. Do you know what was the result of their actions? The Olympic Committee took back their medals for making a political statement and thus violating the Olympic spirit.4. When they returned to USA, they had to face public criticism.5. Peter Norman was also penalised by not being included in the next Olympic.6. Martin Luther King started a movement called Civil Rights Movement in the USA (1954-1968) to abolish legal racial discrimination against the African Americans. They used a non-violent approach and used civil disobedience as a method against discrimination.
7. Another movement, which started in 1966 and lasted till 1975, was called The Black Power movement. It was a militant movement and even advocated violence to end racism in USA.Origin of Social Differences
This incident shows how people respond to social divisions and inequalities
Social divisions can have many forms.

Now think- (i) Most of the social differences are not of our own making, they are based on an accident of birth. Our race, our colour, our religion, our gender or country of birth, are not chosen by us.(ii) But some social differences are made by us only by choice. For example –(1) Non-belief in God, or to follow a different religion, (2) where and what to study, (3) which profession to follow (4) also choose the games or cultural activities we want to follow, etc.Our choices lead to the formation of social groups.(iii) It is not necessary that all social differences should lead to social divisions. People belonging to different social groups share differences and similarities, which cut across all political boundaries.

Important: If religion creates similarities, it can divide people over the issue of caste or sect (Catholic or Protestant, Brahmin or Scheduled Caste).
1. Rich and poor persons in the same family differ from each other and lack closeness to each other, for they feel they are different.

2. The above is an example of one difference overlapping other differences, people of the same  religion feel they belong to different communities.
3. Take another example: In Ireland, a Christian country, the division is because of religion between the Protestants and Catholics.
In Northern Ireland, if you are a Catholic you are bound to be poor and you may have been discriminated against. There have been conflicts between the two.

RANGE OF OUTCOMES
1. (a) Violent ConflictExample: Republic of Ireland and Northern Ireland.(b) Reason: Ethno-religious with political fallout.Example: Republic predominantly Catholic. Northern Ireland 53% Protestant, 44% Catholics. The Republic wanted them to unite.(c) Parties: The Nationalists represented the Republic, the Unionists represented Northern Ireland and wanted to remain within U.K.Example: Violent war where hundreds were killed. Republic of Ireland fought with Northern Ireland as well as with U.K.
Final Outcome: A peace treaty signed in 1998 which ended the armed struggle.
2. Yugoslavia also faced ethno-religious differences. They led to political competition. Civil war followed and Yugoslavia has been broken up now into seven independent nations, namely; Bosnia, Macedonia Croatia, Herzegovina, Kosovo, Serbia and Montenegro. Conclusion: Social divisions should not be allowed to influence the politics of a country. We have seen the result in our own country— Partition into India and Pakistan. In a democracy, how do social divisions affect the people?
(i) Social divisions will be reflected in politics (Example : India)
(ii) Political parties will refer to these divisions.
(iii) Political parties would try to redress the grievances of minorities.
(iv) Voting is affected in most countries. People from one community prefer some parties more than the others.
(v) In some countries, there are parties that focus on one community only.

Factors that decide the outcomes of social divisions
(i) How do people see their  identities? If people think they are  Indians first, and then they are Bengali, Punjabi etc. or a religious or language group, then  there will be no conflict. Trouble in Ireland was because they  thought that first they were Catholics or Protestants and then Irish.In Belgium, it was the opposite.First Belgians, then Dutch or French-speaking.
(ii) Peace remains if one community does not try to dominate the others. For example, in Sri Lanka, the demands of "only Sinhala ’ was at the cost of Tamil-speaking community'. In Yutos  via, each of the group made demands from itself only, with the result that the country was divided into six nations.
(iii) Depends on how the government reacts to the demands. If the riders are willing to share power (as in Belgium) there is no threat to the unity' of the country. But if suppressed in the name of national unity (as in Sri Lanka), it leads to violence.