The document Landforms - Evolution - Physical Geography, UPSC, IAS. UPSC Notes | EduRev is a part of the UPSC Course Geography (Prelims) by Valor Academy.
All you need of UPSC at this link: UPSC

LANDFORMS AND THEIR EVOLUTION

LANDFORMS MADE BY RUNNING WATER

Denudation:-It is the general lowering of the earth’s surface. This takes place because the agents of erosion wear away the rocks and transport the eroded debris to lower land or right down to the sea.

Consequent Streams:-The initial stream that exist as a consequence of the slope.

THE PROCESS OF RIVER ACTION

When a river flow it carries with it eroded materials. These comprise the river’s load and may be divided into three distinct types:-

The ability of a river to move the various grades of materials depends greatly upon the volume or the water, the velocity of the flow and lastly the size, shape and weight of the load. It is said that doubling the velocity of a river, its transporting power is increased more than 10 times.

The course of a river may be divided into three distinct parts:

The features that are often best developed in the upper course of a river include: 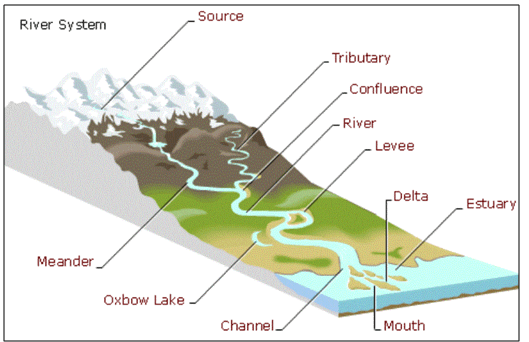 Due to the unequal resistance of hard and soft rocks traversed by a river, the outcrop of a band of hard rock may cause a river to ‘jump’ or ‘fall’ downstream. Thus Rapids are formed. Similar

falls of greater dimension are also referred to as Cataracts. When river plunge down in a sudden fall of some height, they are called waterfalls.

In the middle course lateral corrasion takes place. The volume of water increases with the confluence of many tributaries and this increases the river’s load. The word of the river is predominantly transportation with some deposition.

The features associated with this course are:

Meanders: - Caused by the irregularities of the ground which force the river to swing in loop, forming meanders.

Some of the major Plain Course features are:

Levees: raised bank of a river formed by the deposition of material.

Delta: fan shaped alluvial area at the mouth of a river formed by the deposition of fine materials.

FAVOURABLE CONDITIONS FOR THE FORMATION OF DELTAS

Due to tectonic movement when there is an uplift of land or a fall in the sea level or vice-versa, the three course of a river come into existence once again, which is called rejuvenation of the river.

Negative Movement: it occurs when there is an uplift of land or a fall in sea- level. This will steepen the slope so that down cutting is removed.

Positive Movement: it occurs when there is depression of land or a rise in sea level. This will submerge the lands along the coast, drown the valleys and weaken the erosive power of the river.

A glacier erodes its valley by two processes:

By plucking the glacier freezes the joints and beds of the underlying rocks, tear out individual blocks and drag them away.

By abrasion, the Glacier scratches, scrapes, polishes and scours the valley floor with the debris frozen into it. 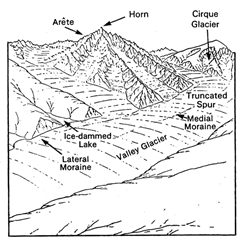 A depression which is converted into a steep, horse-shoe shaped basin by   plucking and abrasion, is called cirque. It is called corrie in Scottland and Cwn in Whales.

Where two corries cut back on opposite side of a mountain, knife edged ridges are formed called Aretes.

When three or more cirques cut back together, their ultimate recession will form an angular -------or Pyramidal Peak.

The glacier eventually melts on reaching the foot of the valley and the ---of transported materials left behind is the terminal moraine.

They are mainly depositional in nature, brought by both valley glaciers and continental ice sheets.

This is a resistant residual rock hummock. The surface is scratched by ice movement. Its upstream side is smoothed by abrasion and its downstream side is roughened by plucking and is much steeper.

The remaining glaciated lowland features are of a depositional nature:-

This consists of a large stretches of bare rocks, swept clear f sand and dust by the wind e.g. Hamada el Homia (Libya).

This is composed of extensive sheets of angular pebbles and gravels which the winds are not able to blow off. They are called serir in Libya and Egypt.

Agents of Earth Sculpture in Deserts

The Action of Wind in Deserts

Features Produced by Water in Deserts

The Action of Waves 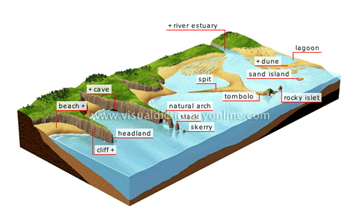