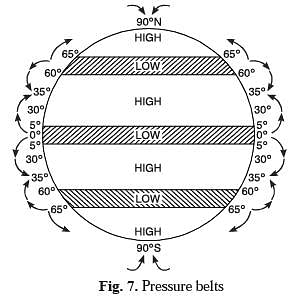 blow within tropics, from the sub-tropical high pressure towards the equatorial low. These winds cover roughly a zone between 5°—35° North and South latitudes.

Direction: In both the hemispheres, these winds tend to blow from East. So these are also termed as Easterlies. In the northern hemisphere, they blow from North-East, while in the Southern hemisphere they blow from South-East.Why so called ? These winds are called trade winds due to the following reasons :(i) These winds were helpful as backing winds to sailing ships. These were thus helpful to early traders; hence the name trade winds.(ii) The phrase ‘to blow trade’ means to blow steadily in a constant direction. As the trade winds are most regular of all the planetary winds, these are known as trade winds or track winds.

Cause of origin.Due to intense heating, air rises upwards as convection currents, resulting in equatorial low pressure. This rising air moves poleward; but descends in the sub-tropics to form a high pressure belts. So the winds blow from the sub-tropical high pressure towards the Equatorial low as trade winds.Change in direction. Winds do not blow in a North-South direction. Earth’s rotation, and the Coriolis Force deflect the direction of winds. This is known as Ferral’s law of deflection. According to this, winds are deflected to their right in the northern hemisphere and to their left in the southern hemisphere.

Effects : (i) As trade winds blow from cooler areas to warmer areas, these are generally dry winds.(ii) These winds gather moisture from the oceans and are on-shore on the east coast of continents giving heavy rainfall.(iii) Trade winds are off-shore on the west coasts. That is why hot deserts (Trade wind deserts) are found between 20°—30° latitudes on the western margins of the continents.(iv) The poleward parts of trade winds are cool and dry; but equatorward these become warm and wet.(v) These winds are steady and regular. These blow with a great force and in a constant direction over oceans. 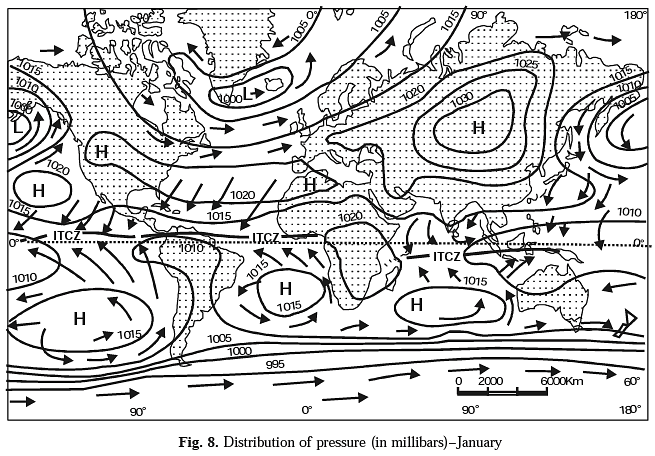 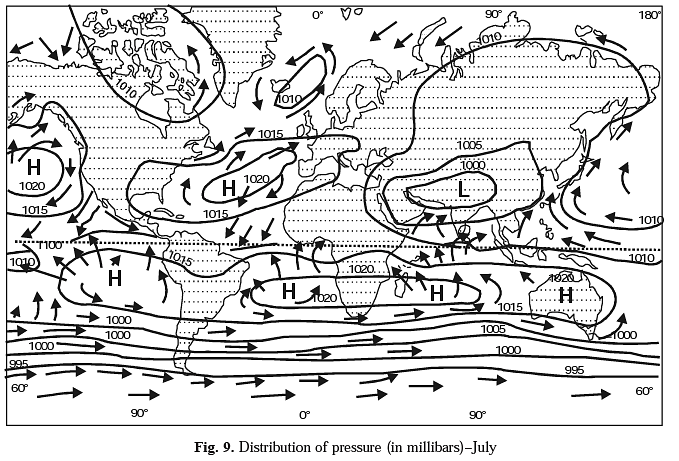 2. Westerlies: Extent: The westerlies blow, within the temperate region, from the sub-tropical high pressure towards the sub-polar low pressure. These winds cover roughly a zone between 35°— 60° North and South latitudes. Their northern limit is variable due to polar fronts and cyclones.Direction: These winds tend to blow from west and are termed as westerlies. As their direction is opposite to the trade winds, these are also called anti-trade winds. In the Northern hemisphere, these blow from South-West.Cause of origin: A high pressure is developed along the tropics (horse latitudes) due to descending winds. Due to rotation and centrifugal force, a sub-polar low pressure is developed along Arctic and Antarctic circles.

So the westerlies blow from sub-tropical high pressure towards sub-polar low pressure between 35°— 60° latitudes.

Effects : (i) These winds are on-shore winds on the western coasts of continents and bring much precipitation. But the eastern parts remain comparatively dry.(ii) These winds are variable in strength and direction. Cyclones and anticyclones produce an uncertain weather. The weather is changing due to clouds, fog, gales and snowfall. 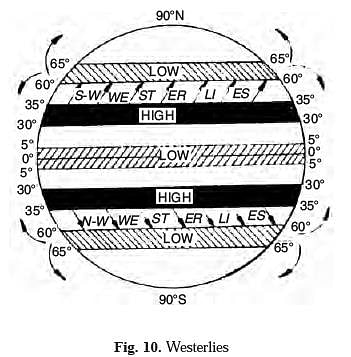 (iii) The westerlies blow uninterruptedly with much greater force and regularly throughout the year. These are best developed in the southern hemisphere due to large expanse of oceans. Here these are termed as brave west winds, roaring forties, furious fifties and shrieking sixties. These stormy winds are a menace to shipping along Cape Horn route. (iv) These winds bring winter rainfall in many parts of the Mediterranean Region.

Q. 2. What is ITCZ ? Distinguish between Hadley cell and Ferral cell. (TBQ) Ans. The air at the ITCZ rises because of convection caused by high insolation and a low pressure is created. To this low pressure the winds from the tropics, the easterlies, converge. The converged air also rises along with the convective cell. It reaches the top of the troposphere up to an altitude of 14 km. and moves towards the north and south poles. This causes accumulation of air at about 30ºN and S. Part of the accumulated air sinks to the ground and forms subtropical high. Another reason for sinking is the cooling of air when it reaches 30º N and S latitudes. Down below near the land surface the air flows towards the equator as the easterlies. The easterlies from either side of the equator converge in the Inter Tropical Convergence Zone (ITCZ). Such circulations are called cells. The cell in the tropics is called a Hadley Cell.In the middle latitudes the circulation is that of sinking cold air that comes from the poles and the rising warm air that blows from the subtropical high. At the surface the winds are predominantly westerlies.

This cell is known as the Ferral cell.

At polar latitudes the cold dense air subsides near the poles and blows towards middle latitudes as the polar easterlies. This cell is called the polar cell.

Factors. The atmospheric pressure varies from place to place and time to time due to the following factors :1. Temperature: As the air is heated, it expands and rises upwards. On the other hand, cold air contracts and becomes heavier. Thus pressure has an inverse relation with temperature. The higher the temperature, the lower is the pressure. The general rule is that a rising thermometer shows a falling barometer, whereas a falling thermometer shows a raising barometer.2. Altitude: There is a rapid decrease of pressure with increasing height. The pressure decreases at the rate of one inch or 34 millibars for every 300 metres.

The pressure decreases with height. The decrease amounts to1 mb for each 10 metres. The lower layers are denser than upper layers. Moreover, the lower layers are compressed under the weight of the upper layers of the atmosphere. It is estimated that about one half of the atmosphere lies upto a height of 5 km.3. Water Vapour: Water vapour is lighter than air. Therefore, dry air is heavier than wet air. Due to this reason, land winds are heavier than sea winds which are laden with water vapour.4. Rotation: The rotation of the earth and centrifugal force result in swing of air in different areas. The sub-polar low pressure along 60° latitudes is due to the rotation of the earth.