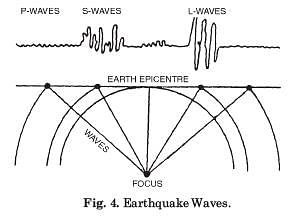 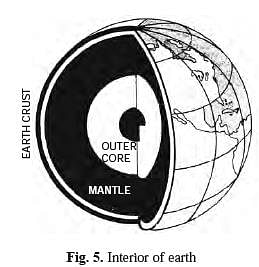 These waves are the last to reach the earth surface. These are the most destructive waves. The structure of the earth is a mystery for man. Different views have been expressed about the structure of the earth. Our knowledge is not based on direct observations. Only earthquake waves are the indirect source of information.  The paths and velocity of these waves suggest the following features about the layers of the earth:(1) The earth can be divided into three layers— Crust, Mantle and Core.(2) The Crust is composed of different types of rocks.(3) The crust consists of light rocks with an average density of 2.7 only.(4) The Core consists of the heaviest materials with an average density of 17.2.(5) Below the crust, there is uniformity of material up to a depth of 2900 kms.(6) The core has a thickness of 2,600 kms.(7) Earthquake waves change their path and speed due to presence of discontinuities between different layers.(8) The absence of the S-waves in the core suggests a liquid core of the earth.

Q. 2. Describe the structure of Earth, giving details about each of its layers or shells and arguments in support of your answer.Or
Discuss how do Seismic waves suggest layering of earth interior.
Ans. Structure of the Earth. Different views have been suggested regarding the interior of the earth. The interior of the earth is beyond the reach of direct observations. The high temperatures are a great hindrance. Direct observations are limited only to depths of 4 kms. The deepest mine in the world, in South Africa, is about 4 km deep. The depth of the deepest bore hole is 6 km. So we have to depend upon indirect sources of evidences.

DIFFERENT LAYERS OF THE EARTH

Vander Gracht has suggested the following layers of the earth :1. Outer Sial. This is the uppermost layer of the earth. It is composed of light rocks with a density of 2.75 to 2.90. Its average depth is 45 kilometres. This layer is also called  crust. Continents have been formed by this layer. Silica and aluminium predominate in this layer and hence it is also called (Si + al) Sial. 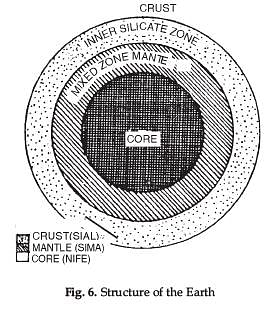 2. Inner Silicate Zone. This layer is found below top layer of Sial. The boundary between the outer and inner layer is called Conrad discontinuity. It has an average  thickness of 1,140 kms. and a density of 3.10 to 4.74.3. Mixed Zone. Next to Sial, a heavier layer is known as Mantle.

It is of two common elements of silica and magnesium; hence it is called (Si + ma) Sima. It has a depth of 1,700 km. and an average density of 4.75 to 5.00. The layer separating Sial and Sima is called Mohorovicic Discontinuity.4. Nucleous. The central core of the earth is called Nucleous or Barysphere. It consists of the heaviest materials like Nickel and Ferrous and hence called (Ni + fe) Nife. It has a thickness of 3500 km. with an average density of 4.75 to 11. The core (Barysphere) has density of 13 to 17.

Q. 3. Describe the distribution pattern of volcanoes in the world.

Ans. Distribution of volcanoes. There are about 500 active or dormant volcanoes. Most of  the volcanoes of 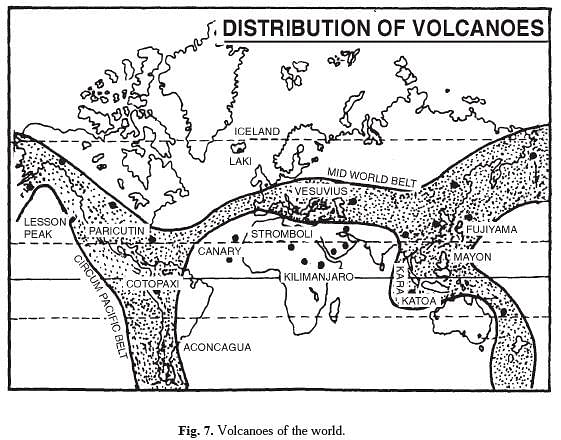 the world are found in coastal areas or unstable regions or areas affected by earthquakes. These volcanoes are distributed in three well defined belts.(i) The Circum Pacific Belt. This belt surrounds the Pacific Ocean. It is also known as ‘Pacific ring of fire’. Some of the well-known volcanoes are Karakatoa (Java), Mayon (Philippines), Fujiyama (Japan), Cotopaxi (Bolivia).(ii) The Mid-World Mountain Belt. This belt extends in an east-west direction along the AlpineHimalayan Region. It includes some well-known volcanoes of the world such as Vesuvius, Strombli, Etna (Mediterranean Sea). This belt runs along the Himalayas, Myanmar to Indonesia.(iii) The African Rift Valley. This belt passing through the Red Sea extends upto Rift Valley of East Africa. The most important volcanoes are Kilimanjaro (Tanzania) and Mt. Kenya. (iv) Other Volcanoes. Scattered volcanoes are found in the island groups of different oceans as Canary islands, Cape Verde islands, St. Helena, Icelands, Azores islands (Atlantic Ocean) Hawaii island (Pacific Ocean) Barren island (Indian Ocean) (erupted in May 1991) .

Q. 4. Describe the volcanic activity and the major features associated with it.
Ans. Vulcanicity. Vulcanicity is an endogenous process through which the heated materials (solid, liquid or gaseous) move from the interior towards the surface of the earth. It results in evolution of a distinct volcanic topography. It includes high relief features like mountains, cones, domes etc. which are known as positive relief features. The low lying features like Caldera Crater, etc. are called negative relief features. The materials thrown out during eruptions are deposited around the crater in the form of volcanic cones.

Land-forms of Volcanic Topography :1. Crater. A crater is a funnel-shaped hollow formed at the centre of volcano. It is formed by an explosion. A crater filled with water is known as a crater lake, such as Lonar lake in Maharashtra.2. Caldera. Calderas are very large volcanic depressions. Calderas are formed by explosion and collapse. The top of the cone is blown off and a broad depression or crater is formed. Caldera of Japan is called “A volcano of hundred villages”. 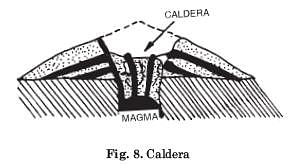 3. Ash Cones. Ash or cinder cones are made of loose ash and dust. They have concave slopes.4. Shield Cones. These are formed by basic lava which is poor in silica. It cools down quickly and travels a long distance. These are flat, low cones with a small angle of slopes such as Mauna Loa in Hawaii Islands. 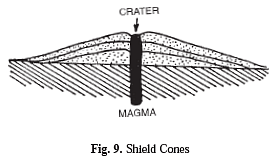 5. Lava Domes. These are formed by acid lava which is rich in silica. It cools down slowly around the crater. These are steep, convex-sided high domes such as Puy de dome in France. 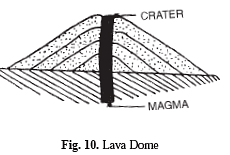 6. Volcanic Plugs. These are domes of thick viscous lava. After the dome is dissected, a volcanic neck or plug remains as a column, such as Lassen Peak in the U.S.A. 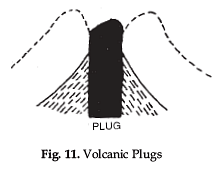 7. Composite Cones. These cones are built by alternative layers of ash, lava and other fragments. It is built over a long period of time. Most of the largest, highest and symmetrical volcanic mountains of the world are of this type. One of the best examples is Strombli, known as ‘The Lighthouse of the Mediterranean’. 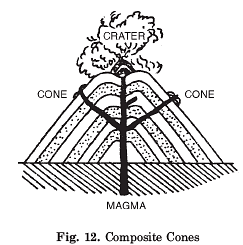 (8) Flood basalt provinces is a another strange type of ‘volcano’. Some parts of the world are covered by thousands of square kilometers of thick basalt lava flows-some flows are more than 50 meters thick, and individual flows extend for hundreds of kilometers. The Deccan Traps from India are a much large flood basalt province.(9) Mid-ocean ridge volcanism occurs at plate margins where oceanic plates are created. There is a system of mid-ocean ridges more than 70,000 km long that stretches through all the ocean basins-some folks consider this as the largest volcano on Earth.