Q. 1. How are incised Meanders and River terraces formed ?Ans. Incised or Entrenched Meanders. Because of active lateral erosion, streams flowing over gentle slopes develop sinuous or meandering courses.It is common to find meandering courses over floodplains, and delta plains where stream gradients are very gentle. But very deep and wide meanders can also be found cut in hard rocks. Such meanders are called incised or entrenched meanders. Meander loops develop over original gentle surfaces in the initial stages of development of streams and the same loops get entrenched into the rocks normally due to erosion or slow, continued uplift of the land over which they start.

River Terraces. River terraces are surfaces marking old valley floor or floodplain levels. They may be bedrock surfaces without any alluvial cover or alluvial terraces consisting of stream deposits. River terraces are basically products of erosion as they result due to vertical erosion by stream into its own depositional floodplain. There can be a number of such terraces at different heights indicating former river bed levels. The river terraces may occur at the same elevation on either side of the rivers in which case they are called as paired terraces. When a terrace is present only on one side of the stream, and with none on the other side, or one at quite at a different elevation on the other side, the terraces are called non-paired terraces. Unpaired terraces are typical in areas of slow uplift of land or where the water column changes are not uniform along both the banks. The terraces may result due to (i) receding water after a peak flow, (ii) change in hydrological regime due to climatic changes, (iii) tectonic uplift of land, and (iv) sea level changes in case of rivers closer to the sea.

(i) Pressure of the ice. (ii) Slope of the land.(iii) The pull of gravity. 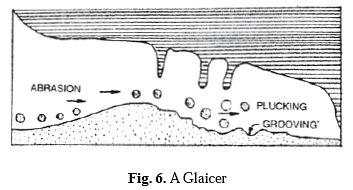 Q. 3. Describe the work of glacier as an agent of Erosion, Transportation and Deposition.Or How do glaciers accomplish the work of reducing high mountains into low hills and plains ?Ans. Work of Glacier. Glacier like other agents, plays a combined role of erosion, transportation and deposition throughout its course. On mountain slopes and valleys, its work is mainly erosion; on plateaus its work is mostly protective; on lowlands, its work is deposition.Erosion. A glacier performs its erosion by different actions like : (i) Plucking. (ii) Grooving. (iii) Abrasion. (iv) Grinding. (v)  Polishing.

A glacier plucks big pieces of rocks from the underlying rocks. Big hollows are formed on the valley floor. The glacier collects big pieces of rocks from avalanches and landslides. These fragments are the powerful tools of glacier. The glacier scratches, polishes the rock surfaces and grinds the pebbles and stones at its bottom. In this way, mountains are rounded and valleys are deepened and widened. The general rugged highland area becomes smooth.

The glacier erosion depends upon the following factors :(i)  Amount of Ice.(ii)  Nature of the rocks.(iii) Movement of glaciers.(iv) Slope of the land.

Landforms, formed by Erosion : 1. Cirque. Cirques are semi-circular hollows at the side of a mountain. The moving ice produces depressions on the slopes of the mountain. Plucking and frost wedging deepens and widens these depressions. An armchair-shaped basin with a back wall is formed. These are known as cirques in France, corries in Scotland, cwms in Wales and karrens in Germany. After the melting of ice, a Tarn like is formed in these cirques.

2. Horns. Sometimes several cirques are formed on all sides of a mountain. These cirques cut back together until these almost meet. A horn-shaped pyramid is formed. This sharp pointed peak is known as Horn. The Matter Horn of Switzerland is a classic example. 3. Col. Col is a saddle shaped pass through mountains. When on the opposite sides of a ridge, two cirques meet, a col is formed. 4. U-shaped Valley. When a glacier enters a V-shaped valley, it changes its shape. The glacier widens and deepens the valley. A V-shaped valley thus becomes a U-shaped valley. A U-shaped valley has a wide flat floor and steep sides. St. Lawrence valley of North America is a U-shaped valley. Drowned glaciated valleys are known as fiords; as along the coast of Norway. 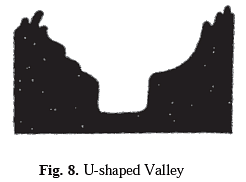 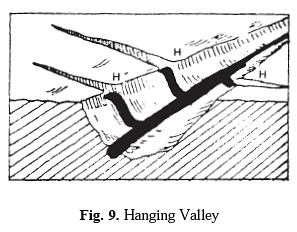 Deposition. When a glacier melts, it is called the retreat of a glacier. Most of the material brought by glacier is deposited. These deposits are called Till or Drift. Glacier deposits its material in the form of hillocks. These are known as moraines. According to the place of deposition, moraines are of the following four types : (i) Lateral Moraines. The material deposited on the two sides of the glacier is called a Lateral or Marginal Moraine. It is a ridge of loose and broken material, rising to a height of 100 feet. 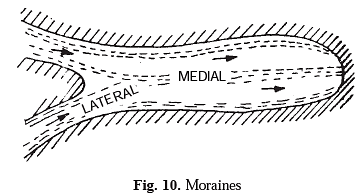 (ii) Medial Moraines. These are formed by the meeting of two glaciers. When two glaciers meet at a point, the inner lateral moraines unite to form only one ridge. This ridge along the middle of the main glacier is called a medial moraine. (iii) Terminal Moraines. When the glacier melts, some material is left behind at the Snout of the glacier. This is called End moraine or Terminal moraine. (iv) Ground Moraines. The material deposited underneath a glacier is called a ground moraine. These are found scattered on valley floor. (v) Other Landforms. After the melting of the glacier, many streams flow from the end of the glacier.

These streams deposit sand and gravel in different layers to form an outwash plain; kettle lakes are formed by filling of depressions with water. Oval shaped deposits like an inverted boat are formed and known as Drumlins. These deposits appear like eggs in a basket. Long narrow ridges called eskars and small rounded hillocks called kames are formed at the end of the glacier.