Q. 1. Describe the general features of submarine relief of a typical ocean floor.Ans. Submarine relief. The ocean basins have relief features similar to the land surface. The irregularities on the ocean beds are shown diagrammatically with the help of hypsographic curve.According to this curve, the ocean floor can be divided into the following parts: 1. Continental Shelf: It is a shallow zone around a continent from the shore-line to the continental edge, with an average depth of 100 fathoms. Continental shelf is thus a shallow platform sub-merged under water.Extent:  The continental shelf covers about 7.5% of the total area of the oceans (about 26 million sq. kms.). It has the maximum extent(13.3%) in the Atlantic Ocean. It  has an average width of 80 kms. It is absent along  coast of Chile and an average depth of 30 metres. Some shelves are 600 metres deep. It extends to over 1500 kms. around the coast of  Arctic Ocean (The largest shelf). Narrow shelves are found along the coasts having high mountains. The mean slope of the shelf is less than one degree. 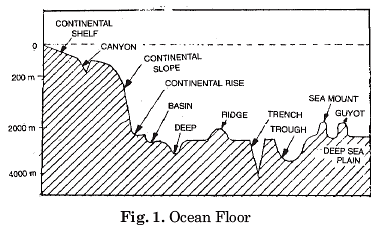 3. Deep Sea Plain:  Beyond the continental slope, the broad undulating plain is known as deep sea plain or Abyssal plain. It covers about 77% area of the oceans.

Its maximum extent is 80.3% in Pacific Ocean. It is uniformally flat with a gradient less than 1/1000. This plain has many submarine features like ridges, sea mounts, islands, volcanoes etc.  Its average depth is between 3000 to 6000 metres covered with sediments. 4. Ocean deeps:  These are the deepest parts of the oceans. It consists of long narrow trenches known as ocean deeps. These cover only 2% of the oceanic area and occupy small areas. These have depths of more than 6000 metres. There are about 57 deeps in the world out of which 32 are in Pacific Ocean, 19 in Atlantic Ocean and 6 in Indian  Ocean. The deepest trench in the world is Mariana trench  in the Pacific with a depth of 11022 metres. The ocean deeps have the following characteristics : (i) These are found along the continental margins and not in the midst of oceans. (ii) Most of the trenches are found along the island arches.(iii) The trenches are closely related to earthquakes and volcanoes.

Tidal energy is generated from Tides. Oceans are the most important, cheapest and natural means of transport. Oceans are storehouse of food for growing population. Therefore ocean have rightly been ‘future storehouse of Resources’. (i) Oceans and Climate :  Oceans exert a great influence upon the climate. Oceans act as a saving bank for the solar energy. Oceans affect the temperature and humidity. The range of temperature is low in coastal areas. Two types of climate — continental and maritime results due to land and oceans contrasts. Ocean currents modify the temperature of coastal areas. The atmosphere derives moisture from the oceans. Rainfall is the gift of oceans. (ii) Oceans and Food Resources: The primitive man was dependent on the oceans for fish. Nowadays oceans are the storehouse of fish. It has inexhaustible resources. Fish now make up more than 10 per cent of the total animal protein food that man consumes.

Refrigeration has helped the modern fishing. Man is increasingly depending upon ocean for food and other useful things. (iii) Oceans and Mineral Resources: Oceans are a storehouse of a large number of useful metallic and non-metallic minerals. These minerals occur both in solution and in suspension. Salt is the most important mineral in saline water. Other minerals include manganese, phosphorite, sulphur, titanium, monozite, gold, iron, sand, etc. Some minerals are renewed in oceans.(iv) Oceans and petroleum: The most important minerals produced from the sea are petroleum and gas.

Petroleum is found in off-shore regions on the continental shelf and shallow basins. 20% of the world’s total reserves are found in off-shore waters. More than 75 countries are exploring oil in such areas. Mumbai High is an important offshore oil region of India, located at a distance of 150 kms from the coasts.

Present oil reserves will last for only 50 years. It is estimated that 40% of world’s oil production will come from the oceans. (v) Oceans and energy: The energy resources of the ocean come in various forms; tidal force, geothermal energy, and energy from ocean temperature differences. Tidal energy is due to tides. A few tidal power stations are working in Russia, France and Japan. Floating generators have been designed to produce power from the difference in ocean temperatures in Belgium and Cuba, Geo-thermal energy is produced from the active volcanoes in the U.S.A., Mexico, New Zealand. (vi) Ocean transportation and trade: Ocean is the most important means of natural transport. It is an invaluable link among the continents. Oceans provide the easiest and the cheapest means of transport. The oceans as a highway has proved a boon for the international trade.The future use of ocean depends in keeping oceans free from pollution. Oceans are becoming a source of disputes among super-powers. It is required to keep the oceans free from all disputes and maintain peace.

Q. 3. Describe the factors which control the amount and distribution of salinity in different oceans.Ans. Sea water is always saline, but the degree of salinity is not everywhere the same. The average salinity of the oceans is 35%o or about 35 parts of salts in 1000 parts of water. 1. The Rate of evaporation: Salinity is directly related to the rate of evaporation. The rate of evaporation increases with high temperatures, strong winds, less rainy days and low humidity. Within tropics salinity is high due to high temperature. The temperate oceans have low salinity due to low temperatures. 2.  Supply of fresh water:  Supply of fresh water reduces the salinity. The amount of fresh water is added by rainfall, melting of ice and large rivers. The salinity is low in equatorial regions due to heavy rainfall. Near the mouths of large rivers like Amazon, Zaire, Niger, low salinity is found. Low salinity is found in North Sea and Baltic Sea, because much fresh water is added from the melting of ice. 3. Mixing of water: There is free mixing of water in open seas due to movements of water by currents, waves and tides. It reduces the salinity locally. In wholly or partially enclosed seas such as the Caspian Sea, Mediterranean Sea, water does not mix freely with ocean water and high salinity is found. In areas of inland drainage  or lakes, salts, accumulate and increase the salinity. 4. Atmospheric Pressure and winds: Warm and dry winds increase the rate of evaporation and salinity. In areas of high pressure, descending winds increase the evaporation due to which salinity is high.5. Movements of sea water: Ocean currents, waves, and tides increase or reduce the local salinity by mixing of water. Salinity, temperature and density of water are interrelated. Any change in temperature or density influences salinity of an area.

Q. 4. What do you mean by salinity of oceans ? Describe the distribution of salinity in different oceans ?Ans. Salinity. Sea water contains large amount of salts in solution. The degree of saltness of water is known as salinity. It is expressed as a percentage or as parts per thousand. Salinity is the ratio between the weight of the dissolved material and the total weight of the sea water. The average salinity of the oceans is 35%o. It means that on an average every 1000 gms. of sea water contains about 35 gms. of salt. The degree of saltness varies in different oceans, but the proportions of different salts remain constant in all oceans. Sodium chloride (77.7 per cent) is  the most abundant salt. Sea water also contains compounds of calcium, magnesium and potassium.

The upper limit of salinity in brackish water is 24.7%.

1. Salinity in open seas: In open seas, the differences in salinity are relatively small. (33%o to 37%o) . (a) Near the Equator. Salinity is below average (34%o) near the equator.

Reasons. (i) High evaporation due to clear skies and high temperatures. (ii) Dry trade winds. (iii) Low rainfall.(iv) Absence of big rivers. In hot and dry regions it reaches 70%o. (c) Near the Poles. In polar areas, the salinity decreases to 20%o to 30%. In Arctic sea it is 0 – 35%. But North Sea has a high salinity due to north Atlantic drift.

Reasons: (i) Low evaporation due to cold air. (ii) Large supply of fresh water by rivers. (iii) Melting of snow and icebergs. (iv) More rainfall due to westerlies. 2. Salinity in wholly or partially enclosed seas. Variation of salinity  is well marked in wholly or partially enclosed seas.(a) Mediterranean Sea has a high salinity (39%). In Red Sea salinity  exceeds 40%o, the Suez Gulf (41%o) and the Persian Gulf (38%o) have salinity above the average.

Baltic Sea has an average salinity of 7%o and drops to a very low of 2%o. Dut to influx of fresh water. Bay of Bengal has low salinity due to high fresh supply of water, but Arabian Sea has high salinity due to low intent of water.

Reasons. (i) Less evaporation due to low

temperature. (ii) Large supply of water due to many rivers. (iii) Melting of snow. (iv) A number of big rivers like Danube, Dniester, Dnierper and Don flowing into Black Sea. 3. Salinity in lakes and inland seas. The salinity in inland seas and lakes is very high.

Salinity is in those enclosed seas in which rivers bring a large supply of fresh water. Northern part of Caspian Sea has a low salinity of 13%o due to river Volga, but it is 170%o in Gulf of Kara-Bogaz.The Salt Lake (U.S.A.) has a salinity of 220%o. The highest salinity is found in Lake Van (Turkey) with 330%o. The  Dead Sea has a salinity of 238%o. The density of water is so high that it is impossible to sink in  Dead Sea. The salt lakes are becoming more salty with the passage of time.

Reasons for high salinity. (i) High temperature. (ii) Rate of evaporation is high. (iii) Accumulation of salt due to evaporation. (iv) Absence of an outlet.

The rate of decrease of temperature with increasing latitude is generally 0.5°C per latitude. 2. The highest temperatures are found in the enclosed tropical seas. For example, the average summer temperature of the surface water of the Red Sea is 30°C.The highest temperature is not received at the equator but slightly towards north of it. 3. The 0°C (32°C) isotherm forms a rough circle round the polar areas, moving equator-ward during the winter. 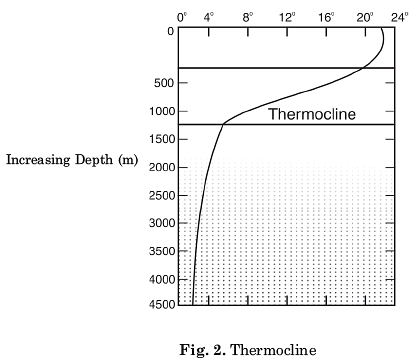