Q. 1. What are tides? How are these formed?Ans. Tides. The sea level is always changing. The water of the sea rises and falls twice a day. These are called tides. ‘The regular rise and fall of sea water is called tides’. When the sea water rises, it is known as flood or high tide or incoming tide. When the sea water falls, it is known as ebb or low tide or outgoing tide. In open seas, the height of the tide is about one metre, but the highest tidal range is found upto a height of 20 metres in the Bay of Fundy (North America).Characteristics of Tides :(1) The height of tides varies at different places.(2) The period of high tide or low tide varies at different places.(3) The seawater rises for 6 hours 13 minutes and falls also for the same period.(4) Tides do not occur regularly at a place.Causes of origin. According to Newton, tides are caused due to gravitational pull of the moon and of the sun on the earth. Due to gravitational pull, waters of the ocean are attracted towards moon. Water being liquid rises higher than the solid crust of the earth.
This is known as high tide. Where the level of the water falls, it is known as low tide.
Due to the rotation of the earth tides occur twice a day at a place.One tide occurs in the waters of the earth facing the moon; the other tide occurs at diametrically opposite side of the earth. This is due to the centrifugal force of the earth. The moon is very close to the earth and its gravitational pull is 5/11 times greater than that of the sun. The sun, owing to its greater distance from the earth, does not exert much influence. 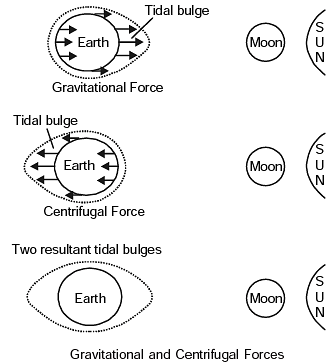 Q. 2. Describe the different types of Tides.Ans. Types of Tides. Tides vary in their frequency, direction and movement spatially from place to place and also from time to time. Tides may be grouped into various types based on based on their frequency in one day or 24 hours or based on height.(A) Tides based on Frequency1. Semi-diurnal Tide. The most common tidal pattern, featuring two high tides and two low tides each day. Successive high or low tides are approximately the same height.2. Diurnal Tide. There is only one high tide and one low tide during each day. Successive high and low tides are approximately the same height.3. Mixed Tide. Tides having variations in height are known as mixed tides. These tides generally occur along the west coast of North America and on many islands of the Pacific Ocean.(B) Tides based on height. The height of rising water (high tide) varies appreciably over space and time. Besides attraction of the Sun and the Moon, the narrowness of bays, and depth of water also influence the height of tides. Spring tides and neap tides come under this category.1. Spring Tides. Tides at certain periods of time are unusually lower or higher than normal height. The position of both the sun and the moon in relation to the Earth has direct bearing on tide height. When all three are in a straight line, the tidal range will be higher. These are called spring tides and they occur twice a month, one on full moon period and another during new moon period.2. Neap Tides result in less extreme tidal conditions. Normally there is a seven day interval between spring tides and neap tides. At this time the forces of the Sun and Moon tend to counteract one another. The Moon’s attraction, though more than twice as strong as the Sun’s, is diminished by the counteracting force of the Sun’s gravitational pull.

Q.3. How are waves caused? What are their characteristics?Ans. Waves. Waves are actually energy, not the water as such, which move across the ocean surface. Water particles only travel in a small circle as a wave passes. Wind provides the energy to the waves. Wind causes waves to travel in the ocean and the energy is released on shorelines.
The motion of the surface water seldom affects the stagnant deep bottom waters of the oceans. As a wave approaches the beach, it slows down. This is due to the friction occurring between the dynamic water and the beach i.e. sea floor, And, when the depth of water is less than half the wavelength of the wave, wave breaks.
The largest waves are found in the open oceans. Waves continue to grow larger as they move and absorb energy from the wind. When the wave height becomes one seventh the size of the wave length, the wave will fall over.