The document Measurement of Angles with Examples Mathematics Notes | EduRev is a part of the Mathematics Course Additional Topics for IIT JAM Mathematics.
All you need of Mathematics at this link: Mathematics 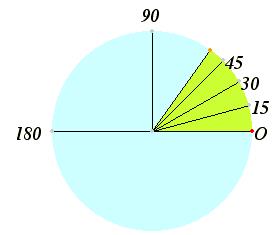 There are two commonly used units of measurement for angles. The more familiar unit of measurement is that of degrees. A circle is divided into 360 equal degrees, so that a right angle is 90°. For the time being, we’ll only consider angles between 0° and 360°, but later, in the section on trigonometric functions, we’ll consider angles greater than 360° and negative angles.Degrees may be further divided into minutes and seconds, but that division is not as universal as it used to be. Each degree is divided into 60 equal parts called minutes. So seven and a half degrees can be called 7 degrees and 30 minutes, written 7° 30'. Each minute is further divided into 60 equal parts called seconds, and, for instance, 2 degrees 5 minutes 30 seconds is written 2° 5' 30". The division of degrees into minutes and seconds of angle is analogous to the division of hours into minutes and seconds of time.Parts of a degree are now usually referred to decimally. For instance seven and a half degrees is now usually written 7.5°.When a single angle is drawn on a xy-plane for analysis, we’ll draw it in standard position with the vertex at the origin (0,0), one side of the angle along the x-axis, and the other side above the x-axis.Radians The other common measurement for angles is radians. For this measurement, consider the unit circle (a circle of radius 1) whose center is the vertex of the angle in question. Then the angle cuts off an arc of the circle, and the length of that arc is the radian measure of the angle. It is easy to convert between degree measurement and radian measurement. The circumference of the entire circle is 2π, so it follows that 360° equals 2π radians. Hence,1° equals π/180 radiansand1 radian equals 180/π degrees 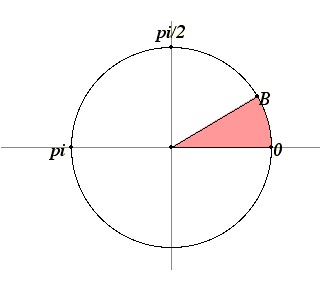 Most calculators can be set to use angles measured with either degrees or radians. Be sure you know what mode your calculator is using.Short note on the history of radians Although the word “radian” was coined by Thomas Muir and/or James Thompson about 1870, mathematicians had been measuring angles that way for a long time. For instance, Leonhard Euler (1707–1783) in his Elements of Algebra explicitly said to measure angles by the length of the arc cut off in the unit circle. That was necessary to give his famous formula involving complex numbers that relates the sign and cosine functions to the exponential functioneiθ = cos θ + i sin θwhere θ is what was later called the radian measurment of the angle. Unfortunately, an explanation of this formula is well beyond the scope of these notes.  Radians and arc length An alternate definition of radians is sometimes given as a ratio. Instead of taking the unit circle with center at the vertex of the angle θ, take any circle with center at the vertex of the angle. Then the radian measure of the angle is the ratio of the length of the subtended arc to the radius r of the circle. For instance, if the length of the arc is 3 and the radius of the circle is 2, then the radian measure is 1.5. The reason that this definition works is that the length of the subtended arc is proportional to the radius of the circle. In particular, the definition in terms of a ratio gives the same figure as that given above using the unit circle. This alternate definition is more useful, however, since you can use it to relate lengths of arcs to angles. The length of an arc is is the radius r times the angle θ where the angle is measured in radians.

For instance, an arc of θ = 0.3 radians in a circle of radius r = 4 has length 0.3 times 4, that is, 1.2.Radians and sector area A sector of a circle is that part of a circle bounded by two radii and the arc of the circle that joins their ends. The area of this sector is easy to compute from the radius r of the circle and the angle θ beween the radii when it’s measured in radians. Since the area of the whole circle is πr2, and the sector is to the whole circle as the angle θ is to 2π, therefore 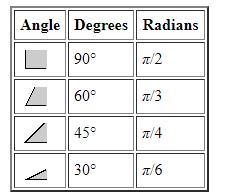 Exercises Edwin S. Crawley wrote a book One Thousand Exercises in Plane and Spherical Trigonometry, University of Pennsylvania, Philadelphia, 1914. The problems in this short course are taken from that text (but not all 1000 of them!) He gave his problems with up to five digits of accuracy, so students had to work some time to solve them, and they used tables of logarithms to help in multiplication and division. Students had to be able to use the sine-cosine table, the tangent table, the logarithm table, the log-sin-cos table, and the log-tan table. Now we can use calculators! That means you can concentrate on the concepts and not on laborious computations.Crawley didn’t used decimal notation for fractions of a degree, but minutes and seconds.Each set of exercises includes first the statements of the exercises, second some hints to solve the exercises, and third the answer to the exercises.1. Express the following angles in radians.(a). 12 degrees, 28 minutes, that is, 12° 28'.(b). 36° 12'.

7. A railroad curve forms a circular arc of 9 degrees 36.7 minutes, the radius to the center line of the track being 2100 feet. If the gauge is 5 feet, find the difference in length of the two rails to the nearest half-inch.

9. How much does one change latitude by walking due north one mile, assuming the earth to be a sphere of radius 3956 miles?

10. Compute the length in feet of one minute of arc on a great circle of the earth. How long is the length of one second of arc?