The document Methods of Purification: Qualitative and Quantitative analysis Class 11 Notes | EduRev is a part of the JEE Course Chemistry for JEE.
All you need of JEE at this link: JEE

A large number of methods are available for the purification of substances. The choice of method, however, depends upon the nature of substance (whether solid or liquid) and the type of impurities present in it. Following methods are commonly used for this purpose,

This is the most common method used to purify organic solids. It is based upon the fact that whenever a crystal is formed, it tends to leave out the impurities. For crystallisation, a suitable solvent is one (a) which dissolves more of the substance at higher temperature than at room temperature (b) in which impurities are either insoluble or dissolve to an extent that they remain in solution (in the mother liquor) upon crystallisation, (c) which is not highly inflammable and (d) which does not react chemically with the compound to be crystallized. The most commonly used solvents for crystallisation are: water, alcohol, ether, chloroform, carbon- tetrachloride, acetone, benzene, petroleum ether etc.

Fractional crystallisation can be used to separate a mixture of 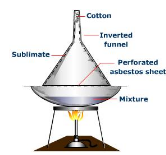 Certain organic solids on heating directly change from solid to vapour state without passing through a liquid state, such substances are called sublimable and this process is called sublimation.

Distillation is the joint process of vapourisation and condensation. This method is used for the purification of liquids which boil without decomposition and contain non-volatile impurities. This method can also be used for separating liquids having sufficient difference in their boiling points. This method can be used to separate a mixture of This process is used to separate a mixture of two or more miscible liquids which have boiling points close to each other. Since in this process, the distillate is collected in fractions under different temperatures, it is known as fractional distillation. This process is carried out by using fractionating columns.  Fractionating column is a special type of long glass tube provided with obstructions to the passage of the vapour upwards and that of liquid downwards. This method may be used to separate a mixture of acetone (b. p. 330 K) and methyl alcohol (b. p. 338 K) or a mixture of benzene and toluene.  One of the technological applications of fractional distillation is to separate different fractions of crude oil in petroleum industry into various useful fractions such as gasoline, kerosene oil, diesel oil, lubricating oil etc. This method is used for the purification of high boiling liquids and liquids which decompose at or below their boiling points.

The crude liquid is heated in distillation flask fitted with a water condenser, receiver and vacuum pump. As the pressure is reduced, the liquid begins to boil at a much lower temperature than its normal boiling point. The vapour is condensed by water condenser and the pure liquid collects in the receiver.

Glycerol which decomposes at its boiling point (563 K) under atmospheric pressure can be distilled without decomposition at 453 K under 12 mm of Hg. Similarly, sugarcane juice is concentrated in sugar industry by evaporation under reduced pressure which saves a lot of fuel. This method is applicable for the separation and purification of those organic compounds (solids or liquids) which (a) are insoluble in water (b)are volatile in steam (c) possess a high vapour pressure (10-15 mm Hg) at 373 K and (d) contain non-volatile impurities. In this method a third compound is used in distillation. The process is based on the fact that dehydrating agents like

, diethyl ether etc. depress the partial pressure of one of the original components. As a result, the boiling point of that component is raised sufficiently and thus the other component will distil over.

This is a modern method used for the separation of mixtures into its components, purification of compounds and also to test the purity of compounds. The name chromatography is based on the Greek word 'chroma' meaning colour and 'graphy' for writing because the method was first used for the separation of coloured substances found in plants. This method was described by Tswett in 1906.

It is constant for a given substance (component) under a given set of conditions. Therefore, it is possible to identify the various components by determining their

This method is used for the separation of an organic compound (solid or liquid) from its aqueous solution by shaking with a suitable solvent (e.g. ether, benzene, chloroform, carbon tetrachloride etc.) in a separating funnel. The selected solvent should be immiscible with water but should dissolve the organic compound to an appreciable extent.

It is important to note that extraction is more efficient (i.e., more complete) when a given volume of the extracting solvent is used in several installments.

This method is normally applied to nonvolatile compounds. For example, benzoic acid can be extracted from its water solution using benzene. 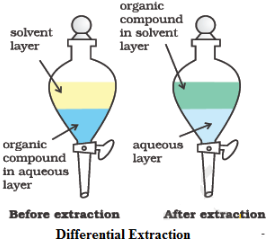 . Since carboxylic acids dissolve in

but phenols usually do not react.

A mixture of 1o, 2o and 3o amines can be separated using either benzenesulphonyl chloride (Hinsberg's reagent) or diethyl oxalate (Hoffmann's method).

Commercial benzene obtained from coal-tar distillation contains 3-5% thiophene as an impurity which can be removed by extraction with conc.

. This purification is based upon the fact that thiophene undergoes sulphonation much more easily than benzene. Thus, when commercial benzene is shaken with conc.

in a separating funnel, thiophene undergoes sulphonation to form thiophene-2-sulphonic acid which dissolves in conc.

while benzene does not.

After this treatment, the benzene layer is removed, washed with water to remove unreacted

and then distilled to give pure benzene.

by weight) is kept over a calculated amount of active quick lime (CaO) for few hours and then refluxed. During this process, water present in rectified spirit combines with CaO to form

. When the resulting mixture is distilled, absolute alcohol distils over leaving behind,

For liquids: Organic liquids are generally dried by keeping them over night in contact with a dehydrating (desiccating) agent which does not react chemically with the liquid to be dried. Commonly used dehydrating agents are quick lime, anhydrous

Criteria of purity of organic compounds: The purity of an organic compound can be ascertained by determining its some physical constants like m.p., b.p., specific gravity, refractive index and viscosity. In usual practice, sharp m.p. (in case of solids) and boiling point (in case of liquids) are used as criteria for purity because their determination is feasible in the laboratory. A pure organic solid has a definite and sharp (sudden, rapid and complete) melting point, while an impure substance has a lower and indefinite melting point.